5 Escape Rooms to try in Barcelona 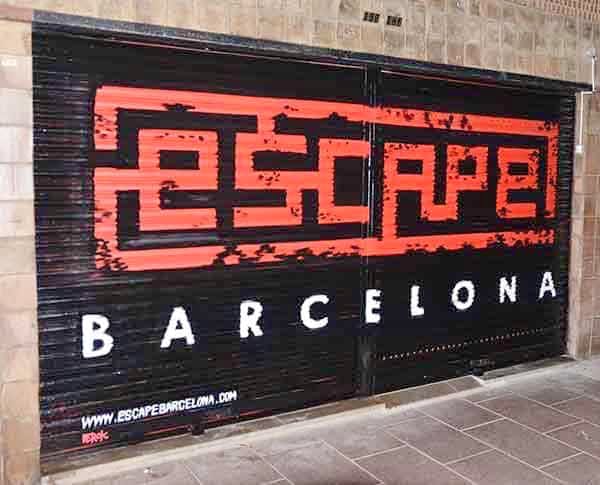 Fans will already know what we are talking about, but the phenomenon of Escape Room (escape rooms) is still unknown to others, and Barcelona could be a great start to approach the genre.

What are the Escape Rooms

Escape Rooms are a very popular type of game (even if the Pokemon are unreachable), in which you are locked up in an environment, from which you have to "escape" using various clues to solve puzzles and riddles, within a maximum time, usually one hour. The operators, called Game Masters, observe what happens inside through cameras, and when necessary they can offer help. They are typically a group activity to do with family or friends, and many overseas companies offer them to their employees as a team building activity.

This kind of entertainment quickly took hold in the great European metropolises, finding in Barcelona a very fertile ground: in the city there are dozens of these structures, many of excellent quality, making the Catalan city a reference point for the whole genre. In this article, we list the best ones we've tried so far.

Probably among the most successful Escape Rooms in Barcelona, Enigmik offers a complete challenge for groups of 2 to 6 people. The room they created, The Bunker, is a perfectly constructed environment, with various very original puzzles and studied in a very balanced crescendo of difficulty: if you have never played in an Escape Room and there are two of you, then you might not time to get out of the room, but still worth a try. The riddles vary with the number of people, and the allotted time to escape from the room is one hour. Certainly suitable for families, to participate, however, at least two adults over 16 years of age must be present to solve the various riddles. The masters speak Spanish and English, so if you want to use the aids you will need to understand at least one of these languages.

Admission costs from € 54 for 2 people (€ 27 per person), up to € 90 for 6 people (€ 15 per person). For more information and to book a session you can visit their website by following this link. Very popular, it is advisable to book well in advance.

Enigmik is located on Carrer Rosselló, 508, in the right Eixample, two blocks from the Recinte Modernista and a 10-minute walk from the Sagrada Familia. The nearest metro stations are those of Sant Pau | Dos de Maig (blue line 5), and Encants (purple line 2).

Proyecto Target Macro Room Escape Barcelona offers a space of 160 square meters, consisting of several rooms with numerous puzzles and riddles to be solved in different areas, such as math or logic games, group puzzles, observation skills tests, or simply finding hidden things. The amount of puzzles is such that it is advisable to go with at least 3-4 people, although the minimum number to participate is 2. The setting is detailed, unlike other Escape Rooms, no introduction is offered, the story develops directly into the game, making it absolutely engaging. The minimum age to play is 14, you can go with younger children, as long as there is an adult for each child.

The cost varies from € 25 per person in 2, up to € 16 per person if you are 5. For more information you can visit their website.

The Proyecto Target is located in Carrer de Santa Dorotea, 6, two blocks from the CaixaForum, basically at the foot of Montjuïc (metro Plaça de Espanya, lines 1, 3 and 8). Choosing the time carefully you could go and see the show of the nearby Font Màgica immediately after the game.


Prisoners of the dungeon

Part of an international network of Escape Rooms based in Russia (the Claustrophobia), los prisioneros de la mazmorra is one of the three most beautiful Escape Rooms in Barcelona. Set in the medieval era, you can see the care and time needed to create the decorations and environments, with attention to the smallest detail, able to recreate a truly successful setting. Of not high difficulty, this escape room is an excellent experience for those who want to get closer to the playful experience of the Escape Room, and is especially recommended for families. The minimum age to participate is 8 years with an adult companion, and 14 without, however it is recommended for everyone. The number of participants is from 2 to 4 people.

For reservations and more information you can visit the official website, so you will need to register before you can make a reservation. Unlike other Escape Rooms, los Prisioneros applies a fixed rate regardless of the number of players: € 60 from Monday to Thursday, € 80 on Friday and Saturday and € 70 on Sunday.

In this escape you will put yourself as a group of journalists who, after a series of assassinations, will have to spend an hour in the famous Picadero Motel, e try to see if there is enough evidence to charge the main suspect, the hotel manager, precisely El Picadero. With a series of very original and very well elaborated puzzles and riddles, the Picadero Motel succeeds in its intent to make you pass moments of pure adrenaline, with a very funny story and a decidedly horror plot. The difficulty level is not excessively high, so it is also suitable for novice escapers. The minimum age to play is 18, children from 14 can be accepted provided they are accompanied by an adult, and obviously love the horror genre. As always, the game masters speak Spanish and English.

The Picadero Motel is located at Passatge de Nogués, 8 in the Gràcia district. You can get there from the Joanic stop (yellow line 4), walking for 5 minutes, or from the Sagrada Familia stop (lines 2 and 5), with a 10 minute walk.

Another very popular Barcelona Escape Room, Chicken Banana offers three different environments, each environment is also double, so you can divide your group in two and play against each other. The groups are from 3 to 6 people for all environments: Mafia, Psychiatric and Prison. The introductory video and the operators allow you to immerse yourself in the story from the first minute, adding a certain touch of theatricality, with the result of offering an hour of pure fun. The puzzles are well balanced, favoring teamwork, and the Psychiatrist's room also offers some extra thrills.

In general for those who are beginners the best could be Mafia, Psychiatric instead could be more challenging.

The game is presented in English and Spanish, however it is not necessary to have special language skills to participate. Given the large number of settings, Chicken Banana can be ideal for companies that want to send their employees, also offering services dedicated to companies, in addition to the 6 rooms that can be used simultaneously. All participating members should be at least 14 years old to play, however parents can bring their own children from 7 years of age.

Chicken Banana is located in the Poble Sec neighborhood, at Carrer de Rocafort, 12-20. The venue is not visible from the street, so you have to enter the building (the number is marked as 20-12). The closest metro station is Poble Sec (green line 3), however you can reach it by walking for 5 minutes from Plaça de Espanya (lines 1, 3 and 8), so it could be associated with a visit to the CaixaForum, the Foundation Miró or the MNAC; it is also a few stops from Camp Nou.

add a comment of 5 Escape Rooms to try in Barcelona