Barcelona Cathedral: it is not the Sagrada Familia

This article is dedicated to Cathedral of the Holy Cross and Santa Eulalia (in Catalan Catedral de la Santa creu i Santa Eulàlia), a Catalan Gothic style church located in the square of the same name, and is the most important building in the Barrio Gòtico of Barcelona.

It is more commonly known as the Seu: in Catalan means headquarters, with reference to the seat of the city archbishopric.

The Sagrada Familia is undoubtedly more famous, but hierarchically less important than the Cathedral.

Still others confuse the Cathedral with the Church of Santa Maria del Mar in the district of La Ribera. This is also worth a visit, but as mentioned the Cathedral is only one, which I will tell you about now.

History of the Cathedral

The place where the Seu stands today preserves many traces of a long history: the Gothic cathedral was built in place of a previous Romanesque cathedral, in turn erected over a church of the Visigothic era, and the latter was built on top of an early Christian church .

The remains of the first early Christian church were discovered in the basement of the church during the second half of the twentieth century, and today they can be visited by accessing the City history museum (MUHBA), in Plaça del Rei.

La construction of the Gothic cathedral began in 1298, beginning to replace and expand parts of the previous Romanesque cathedral.

The apse was the first part of the new church to be completed, in 1338, to then proceed with the construction of the central aisles, around 1380, up to the cloister, completed in 1463.

From this moment on, the cathedral is basically finished, with the facade and some external details still to be completed. These last works will be proposed only after 1880, with the idea of ​​completing them by the Universal Exhibition of 1888.

The facade was then finished in 1890, and the tower was completed in 1913, the year in which the statue of Santa Elena was placed on top of the tower, and the cathedral was completed as it is today. During the Spanish Civil War, the Cathedral was one of the few religious buildings to be spared by anarchists, given its considerable historical and artistic importance.

The cathedral of Santa Eulalia has important dimensions: the building measures 93 meters by 40, with a height of 28 meters in the main nave. The 53th century bell towers are 1913 meters high, while the 70 nolare tower reaches a remarkable height of XNUMX meters above the ground, one of the highest in all of Spain.

The cathedral has 5 doors, 2 of which allow direct access to the cathedral, and the other 3 to the cloister. The main door is the most recent, while that of Sant Ivo, located on the left transept, is the oldest: the marble blocks on the sides of the portal probably come from the previous Romanesque church.

Interior of the cathedral

The Headquarters is formed by three naves of the same height, the central one with a double width compared to the lateral ones.

The church does not have a cross plan, as there is no real transept: the three naves end creating a single space from which the apse extends, enclosed by a semicircular series of columns, and by the choir.

Inside the cathedral there are 26 chapels: on the sides of the aisles there are 17 chapels, 9 on the left and 8 on the right; behind the apse there are 9 other chapels.

Most of the chapels are decorated with the typical Spanish retablos: these are statues and paintings inserted in a support, generally in wood, finely decorated, with dimensions such as to cover the entire wall of the chapel: among its authors are the best Catalan artists, and represent among the greatest artistic expressions of era.

The styles represented are very different, ranging from the Gothic (retable of San Bartolomeo and Santa Isabella), to the Renaissance (retable of San Giovanni Battista) up to the Baroque (the retablo della Merced in the apse is noteworthy).

Inside the chapels there are also numerous paintings and sculptures from more recent times: in a few meters you can easily retrace the history of art, from the Middle Ages to today. 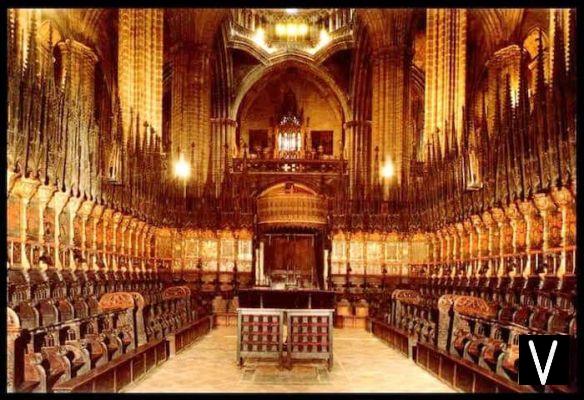 The construction of the choir was begun in 1390, and finished before 1519. Its complexity is such as to undoubtedly make it an apex in sacred art. Several stages in the development of the choir can be recognized.

The master craftsman Pere Sanglada he was commissioned to start building the seats in 1394, using massive oak wood, carving both sacred sculptures and secular scenes, such as dance, music and games. The construction of the pulpit took place in this period, inserting fifteen images representing various scenes from the Gospel, and from the life of the saints, finishing the works in 1403.

Later he was the sculptor Macià Bonafè to proceed with the carving and construction of another 48 seats, finishing his work in 1459. Emperor Charles V decided to celebrate the 1519th chapter of the order of the Golden Fleece in the cathedral of Barcelona, ​​and orders to enable the choir for this function by 64: the heraldry of the various members of the order, including the kings of France and England, were painted on XNUMX seats.

The organ is located above the San Ivo gate, ed it is one of the best preserved specimens in Europe. Consisting of 4 keyboards, it has a case built in the Renaissance style, with numerous subsequent artistic contributions from the Baroque era, and several mechanical interventions throughout its history, aimed at improving its technical characteristics. Currently the organ has 4013 pipes, and has 128 possible registers: in addition to accompanying the various liturgical acts, large concerts are frequently celebrated inside the cathedral.

Immediately to the right of the main entrance you can enter the ancient chapter house, where the Christ of Lepanto is exhibited: it is a Renaissance wooden crucifix, brought to war by the Spaniards as a good omen in the naval battle of Lepanto in 1571: a Christian coalition formed by Spanish and Italian ships severely defeated the Ottoman fleet in the Greek waters near Lepanto, eliminating the danger represented by the Turkish naval power in the Christian world.

The crypt of Santa Eulalia is located below the presbytery, and was built in the XNUMXth century.

On the key of the cross vault is represented the Virgin with the Child in the act of placing the diadem of martyrdom in Santa Eulalia. The sarcophagus, in alabaster, is the work of Lupo di Francesco, a XNUMXth-century Pisan sculptor.

The Gothic-era cloister was built together with the cathedral, forming an important part of the entire building.

Access to the cloister can be done directly from inside the Cathedral, through the internal door located on the right side of the transept, or through the two external doors of the Pietà or Sant'Eulalia.

The inner door is essentially Romanesque in style, although it has several Gothic details, such as the tympanum: it is thought that it belongs to the previous Romanesque church, and that it was later adapted to the new cathedral, adapting it to new aesthetic tastes.

The cloister is contemporary to the cathedral, having been built between the fourteenth and fifteenth centuries, designed by the architect Andreu Escuder, with works by various sculptors. Along three sides of the cloister there are numerous chapels, sponsored by the various guilds or by some families.

The garden is located in the center of the cloister, renovated at the end of the 800th century with magnolias and palm trees, a pool and a spring: the garden space has been occupied since time immemorial by 13 geese, one for each year of Santa Eulalia, to which the church is dedicated. Another very ancient tradition of Barcelona takes shape on the occasion of Corpus Domini, when an empty egg is placed on the fountain, which is thus supported by the jet of water; in Catalan it is known as l'ou com balla (literally the egg as a bale).

The cathedral museum is located on the side of the cloister without chapels, in the new chapter house.

Inside is the cathedral's artistic collection, including a 1490 Pietà by Bartolomé Bermejo, and the splendidly decorated doors of some of the retablos located inside the church.

How to get to the cathedral of Barcelona

The cathedral is located in Plaça Nova, in Gothic Quarter of Barcelona.

It is about 300 meters from Plaça de Catalunya, or you can reach it by metro, exiting at the Jaume I stop, line 4.

Hours and tickets: when it is free

On Saturdays and Sundays the opening is extended until 20:00, and free admission is possible until 17:00.

Free admission allows access to the church and cloister.

For access the choir, the cathedral museum and the roof during the free access hours it is necessary to pay a 3 euro ticket.

add a comment of Barcelona Cathedral: prices, times and history