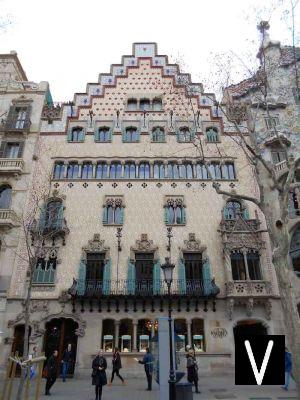 Casa Amatller was the first of the modernist houses on Passeig de Gràcia: located next to the more famous Casa Batlló by Gaudí, it composes, together with the Casa Lleó Morera (the work of the other great architect of Catalan modernism, Lluís Domènech i Montaner) the famous apple of discord di Barcellona.

Regularly open to the public since 2014, Casa Amatller is among the very few modernist buildings to preserve the furnishings of the time, allowing visitors to understand what the lifestyle of a bourgeois family from Barcelona was like at the beginning of the XNUMXth century.

La manzana de la discordia is a pun on the meaning of manzana, which in Spanish means both apple and isolated, offering an ironic reference to the bone of contention from Greek mythology.

The original building dates back to 1875, and had a typically neoclassical appearance.

In 1898 the palace was bought by the chocolate industrialist Antoni Amatller, who commissioned the architect Josep Puig i Cadafalch to remodel the building to make it a single dwelling.

The Catalan architect, in his early thirties, conceived and completed a very innovative project for the time, with his very personal interpretation of Catalan Gothic, reinterpreted in a modernist key. With the collaboration of various craftsmen, Puig i Cadafalch renovated the entire building in about 2 years, giving the city of Barcelona the first of the three houses that make up the famous manzana de la discordia.

The remodeling of Casa Amatller it constitutes a first radical transformation of the Eixample development plan: for the first time the neoclassical schemes based on symmetry and regularity are completely distorted, exceeding the limit of 22 meters in height imposed by the urban regulation, and thus marking the eruption of modernism in the Eixample of Barcelona.

Considered a jewel of decorative art, the facade impresses with its warm colors, combined with a series of sculptural decorations with rich symbolism, with different themes typical of the Gothic and Catalan folklore.

The large window on the noble floor on the right recalls that of the chapel of Sant Jordi in the Generalitat building; on the entrance door, on the other hand, another typical element of Catalan folklore is represented: the stone figure of Sant Jordi (Saint George) killing the dragon, the work of Eusebi Arnau.

Note also the other windows on the ground floor, inspired by the Catalan Gothic style of the old country houses.

At the level of the main floor, the sculptures of the windows recreate fantastic and grotesque creatures, characteristic of Gothic palaces and churches.

Other references are related to the family name: amatller in Catalan means almond, represented by motifs in the shape of almond blossoms with capital A's in the middle. 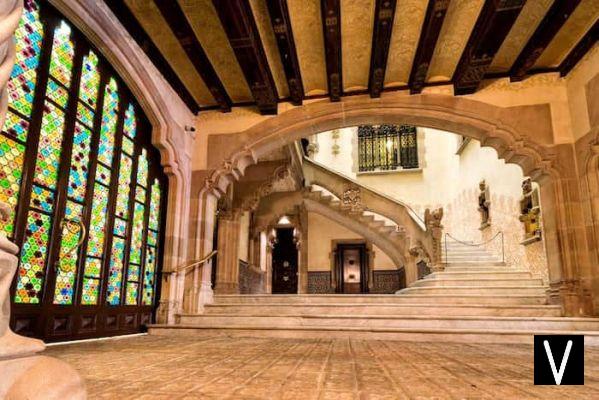 Puig i Cadafalch's modifications involve a wide range of substantial changes in the building's interior.

The reorganization of the spaces on the ground floor suppressed one of the pre-existing commercial premises, to the advantage of the needs of the upper apartment, converting the part facing the street into a vestibule for the entrance to the building.

Here the architect created an elegant space, with elegant Sevillian ceramics, a large glass door that led to the garage, the kitchen on the main floor and the servants' homes.

On the right you can instead enter the internal patio of the house, similar to those visible in the buildings of Carrer Montcada, with the staircase leading to the main floor of the house, covered by a spectacular skylight of colored glass and wrought iron.

The main floor contains the most interesting parts of Casa Amatller: in addition to the architectural beauty of the decorations of the various rooms, most of the furniture is original from the time, offering a glimpse into the life of a rich bourgeois family in Barcelona in the early 900s.

Among the various rooms that can be visited the two bedrooms should be emphasized, of his father (Antoni Amatller separated from his wife in 1877), and of his daughter, both richly decorated with allegorical sculptures dedicated to the various passions of the father in the first and to female virtues in the second.

The salon best represents one of Antoni Amatller's passions, preserving his archaeological collection of glass objects, arranged in specially designed showcases. Completing the path are the bathrooms, the kitchen and the corridors, all richly decorated.

Given the particular delicacy of the objects and floors of Casa Amatller, it is possible to carry out the visit with some precautions: at the entrance, flaps are provided to wear under the soles, to be able to walk on the floors, moreover entry is prohibited in any case with stiletto heels, walking sticks, or crutches, which will be left in the wardrobe.

Prams are available on request. Photographs can be taken as long as the flash is not used.

Where is it and how to get there

Casa Amatller is located on Passeig de Gràcia, at number 41.

The closest metro stop is Passeig de Gràcia (lines 2, 3 and 4) of the same name.

With the turístic bus you can get off at the Casa Batlló - Fundació Antoni Tapies stop, shared with the red and blue lines.

Visits to the palace are always guided, and start every half hour, for a maximum of 12 people at a time.

Express visits, on the other hand, are given simultaneously in these three languages. However, try to enter the general visits, it is worth it, and even if you don't speak Spanish or Catalan you shouldn't have difficulty understanding what is said.

Discounts are available for those over 65 and students (both 10%); children from 6 to 12 years pay a reduced ticket of € 12, while admission is free for children up to 5 years.