Casa Garriga i Nogués - the official name is MAPFRE Foundation Room Casa Garriga i Nogués - is an eclectic-modernist style building located in the Eixample of Barcelona. The palace is a typical example of the Eixample constructions at the beginning of the 1901th century, the work of the architect Enric Sagnier and completed in XNUMX. It currently houses a large exhibition hall of the MAPFRE group, dedicated to painting and photography.

The house was designed by Sagnier on behalf of the financier Rupert Garriga-Nogués i Miranda, and completed in 1901. The Garriga i Nogués family lived in the building until 1936, until the outbreak of the Spanish civil war. After the war, the building first housed a religious college, and then from 1983 until 2004, the headquarters of the Encyclopedia Catalana publishing house. In 2007 the entire building was purchased by the Godia Foundation, to house the museum of its collection. It is currently employed by the MAPFRE Foundation to host temporary exhibitions.

Architecture of Casa Garriga i Nogués

Casa Garriga i Nogués is an eclectic-style building, with classic elements of the Baroque combined with others of modernist inspiration. Outside, on the ground floor, under the balcony on the first floor you can see 4 female figures made by the sculptor Arnau, the same who took care of the external decorations of Casa Lleó i Morera and Casa Amatller. The 4 figures represent the stages of life: from left to right childhood, youth, adulthood and old age.

Once inside the building you can immediately notice the staircase leading to the first floor, and the huge glass skylight that covers the internal patio. The interiors are richly decorated in a variety of styles: walls and ceilings are generally in the Rococo style, with numerous plaster ornaments. Some details are in the modernist style: this is the case of the splendid glass window, representing a natural landscape, and some finishes scattered throughout the building. 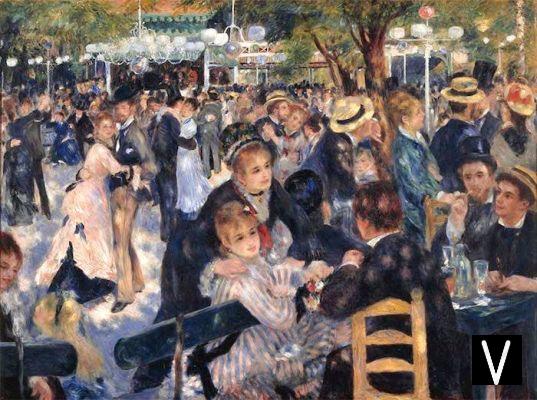 Renoir among women: from the modern ideal to the classical ideal. Collections of the Musée d'Orsay and the Orangerie (17/09/2016 - 08/01/2021)
From 17 September it is possible to enter Casa Garriga i Noriés to admire an exhibition on Renoir, and his interpretation of the woman throughout his life. The painter gave great prominence to women by painting them often, and making them the protagonists of many of his paintings: his wife, lovers, friends and models.

The route includes approx 60 works by the French painter, representing an evolution of Renoir's work from a new point of view, based on the different interpretations of the female image he created during his artistic production. In her works the protagonism of the modern Parisian woman, the most intimate vision of the maternal image and the timeless beauty of the nude, characteristic of her later years, are highlighted. Renoir surrounded himself with women throughout his life, representing in his paintings the delicacy, sensitivity and voluptuousness of the portrayed figures. Admiring his works as a whole, it can be said that Renoir was the painter of the woman.

The exhibition was organized and realized with the scientific collaboration and exceptional loans of the Musée d'Orsay and the Orangerie, which include works by Van Gogh, Picasso and sculptures by Degas.

The exhibition hall of Casa Garriga i Nogués collaborates with other public institutions, such as the MNAC, for the organization of exhibitions, as well as having its own program, focused on pictorial exhibitions of the period 1850 - 1950, and the great masters of photography. All the exhibition spaces are free of architectural barriers. More information is available, in English and Spanish, on the institution's official page.

How to get to Casa Garriga i Nogués

Casa Garriga i Nogués is located at Carrer de la Deputació, 250, near Plaça de Catalunya. You can get there by metro by getting off at Passeig de Gràcia station (lines 2, 3, 4), or at Catalunya (lines 1 and 3).

The exhibition hall is open on Mondays from 14pm to 00pm, Tuesday to Saturday from 20am to 00pm and on Sundays and public holidays from 10am to 00pm. The hall is closed on January 20st, December 00th and 11th. Access is allowed up to 00 minutes before closing.

add a comment of Casa Garriga i Nogués - MAPFRE Foundation