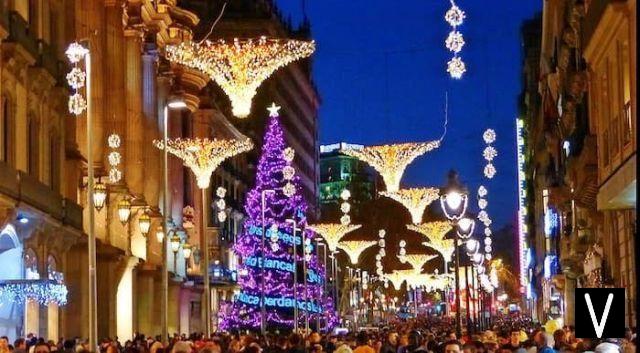 Probably imagine the Christmas in Barcelona it is a bit difficult for those unfamiliar with the city: in the collective imagination when one thinks of the Catalan capital one thinks of a summer city, with its seafront and its beaches.

Despite the premises, the Christmas is one of the most interesting times to visit Barcelona, especially if in the company of the family: the City of Barcelona has a vast assortment of deeply rooted Christmas traditions, from its renowned Christmas markets, through nativity scenes, Christmas foods, to typical masks.

Christmas in Barcelona: what is open?

As for the restaurants, no problem. Almost all those present in the most touristic areas will work on both 25 and 26 December. On the other hand, most shops and businesses work half a day on December 24th, to remain closed on December 25th and 26th.

On museums and attractions, however, some distinctions must be made:

Christmas in Barcelona: the weather

Being a city overlooking the Mediterranean, the temperature rarely drops below 5 °, and even more rarely you can see the snow settling on the ground. Winter in general is not very rainy, however it is advisable to bring umbrellas and a pair of shoes suitable for rain.

The metro works every day of the year, including Christmas. The only difference is on December 24, when the last trains leave at 22pm instead of 00pm. On New Year's Eve, the metro will remain open all night. Some timetable changes are also planned for buses, but all lines, including night N, remain operational. Finally, the Bus Turístic: it does not operate on December 23th or January 00st.


Christmas in Barcelona with children

There are many activities suitable for those traveling with their children: in addition to the Christmas markets, the traditional pessebres and nativity scenes are worth seeing: certainly the one in Plaça Sant Jaume, very large and characteristic, is to be seen. During the Christmas period, some traditional masks, such as the Carassa, a large statue representing a Moor's head, from whose mouth sweets and sweets come out for the little ones, present every weekend at the Fira de Santa Llúcia and in the streets around the Cathedral.

Try the skating rinks: an interesting choice is that of Barcelona FC near the Camp Nou, you can go with the children first to see the stadium and then go skating with the whole family.

Tourism in Barcelona at Christmas

In general, the Christmas period is high season, so it is advisable to look for accommodation well in advance in order not to end up too far from the historic center. As for museums and attractions open during the other days of the Christmas period, keep in mind that during the period of school holidays many local families take their children to various museums: even if you do not reach the peak periods of summer, you will find a certain crowding in many structures.

If you walk around a Christmas market in Barcelona, ​​at some point you will wonder what those funny tree trunks decorated with eyes and tongues are, why most of the Christmas figurines for sale represent people doing their own thing, and what we need those strange clay pots that make an unpleasant noise. They are respectively the tió de Nadal, the caganer and the zambombas, all Catalan Christmas traditions, but let's see them in detail.

Catalans are very fond of their Christmas traditions, and some are very peculiar: the manger, that is the crib, is prepared in every home, but the Catalan one has a particularity that is difficult to find elsewhere: the caganer. Basically it is a statuette representing a man in the act of defecating: it is an essential element of the typical Catalan nativity scene, generally placed in a secluded place.

Its origins are uncertain, but when the Municipality recently tried to make the crib without this curious element, a chorus of protests rose, and it was immediately added. The caganer can be found both in traditional form, with the typical Catalan hat, the barretina, or depicting current affairs, such as politicians, footballers or actors.

Another all-Catalan tradition is that of the Tió de Nadal, a hollow wooden trunk with eyes and nostrils, which is struck by children on Christmas day to the rhythm of a nursery rhyme to receive candies and sweets contained within; to be precise the Tió de Nadal is normally known as caga Tió - ideally joining the previous tradition. It should be noted that Catalan children traditionally open their gifts not on Christmas day, as in Italy, but on the day of the Reis, which is January 6th. Typically on this day we eat the tortell de Reis, a brioche donut filled with marzipan, and covered with candied fruit. Inside there are two surprises, the figurine of a king, and a dried stone. Whoever finds the king is crowned with the golden cardboard that usually accompanies the tortell, whoever finds the fava instead buys the next tortell.

What to do in Barcelona in May

November in Barcelona: all the most important events

98%
We have been able to provide in 98% of times, the solutions that users were looking for when consulting our page.