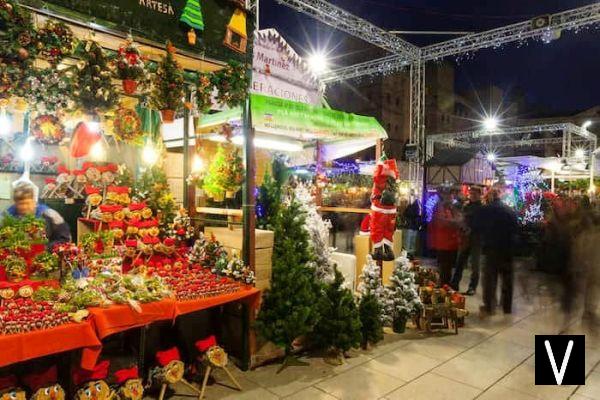 One of the various names by which Barcelona is known is that of city ​​of markets, city of markets, due to the large number of city markets scattered throughout the districts. The Christmas season is no exception, and Barcelona is home to some of the largest Christmas markets in all of Spain during the Christmas period. 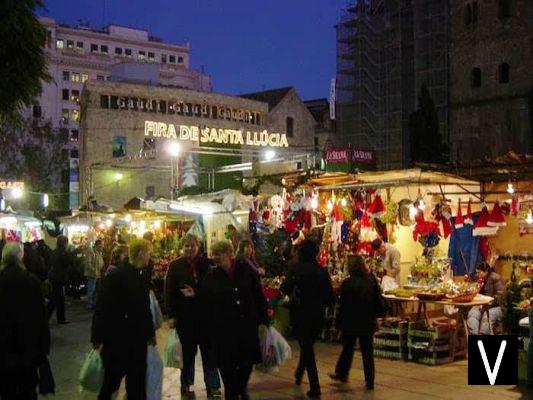 La Fira de Santa Llúcia it is the oldest Christmas market, as well as one of the most evocative: the first documented date is 1786. The fira is held in front of the Cathedral, in the Barrio Gótico, so it is impossible to miss it. With over 300 stalls, the market is divided into various sections; the most important is the one concerning the nativity scene, with figurines and accessories of all kinds and types, on which the inevitable caganer stands out.

Another section of the market is dedicated instead to Christmas decorations: Christmas trees, intertwined, adorned hawthorn branches, and Tiós de Nadal of all sizes.

The third sector, on the other hand, deals with popular musical instruments, typical of Catalan Christmas: flutes, tambourines and the ubiquitous zambombas, a percussion instrument made with a clay pot, goatskin and a bamboo cane: to play it you have to rub the hand gently moistened against the bamboo cane, vendors are usually very willing to show how it should be played. The last sector is dedicated to crafts: you can find costume jewelery, Christmas sweets, clothes, candles and various gifts.

The Fira de Santa Llúcia is held in Plaça de la Seu, opposite the Cathedral. It starts on the last Friday of November, and lasts until 23 December, every day from 11 to 20:30, from 10 to 21:30 on weekends and holidays. Being in the middle of the Gothic Quarter you can also reach it on foot from the Rambla in a few minutes' walk.

Another traditional event, the Fair of Kings it is the most important Christmas market in Barcelona, ​​together with that of Santa Llúcia. With over 200 kiosks, it is one of those places where you can always find a last-minute gift, both for children and adults: in addition to toys and sweets, in fact, you can find numerous handicrafts, clothes , food and household items. In addition to this, inside the market you can find stalls that prepare churros, to be strictly dipped in hot chocolate, as well as the typical tortell de reis.

The market de Reis is held in Gran Vía de les Corts Catalanes: there are three metro stations along its route: Universitat, Urgell and Rocafort, all served by line 3, and Universitat station also by line 2. The market starts the on December 20st and ends on January 6, precisely the Epiphany, or día de Reis in Catalan. It opens every day from 11:00 until 22:00. On January 5th the opening hours are extended from 10:00 until 2:00 the next morning.

Christmas Fair of the Sagrada Familia

It is one of the most traditional markets in Eixample, and as the name implies, it is located in the square in front of the Sagrada Familia. It is not the largest, but it still has a hundred locations, all in the shadow of the most famous monument in the city. As types of products it is similar in all respects to that of the Catedral: figurines of the crib, Christmas decorations, crafts and sweets, with the advantage of being less crowded than the latter, and therefore more flowing.

The market is held from Monday to Friday from 10:00 to 21:00, on Saturdays, Sundays and holidays until 22, in Plaça de la Sagrada Familia, on the side of the facade of the nativity from 24 November until 22 December. By metro or get off at the stop of the same name on lines 2 and 10, or with the Bus Turístic, always at the Sagrada Familia stop on the blue line.

The markets of Barcelona

What to see and do in Barcelona