Crime and security in Barcelona

Do you want to travel to Barcelona, but you're worried about security? You're worried! At ForBarcelonaLovers we tell you all about crime and safety in Barcelona so you can relax. Let's get to it! 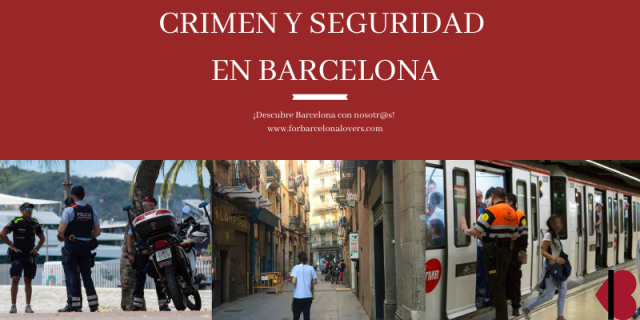 Do you want to travel to Barcelona, but you're worried about security? You're worried! At ForBarcelonaLovers we'll tell you all about crime and safety in Barcelona so you can relax. Let's get to it!

Crime in Barcelona varied by -40.63 percent so far this year compared to the same period last year, with a total of 89,069 criminal offenses, according to data from the Balance of Crime of the Ministry of Interior.

The crime in Barcelona in relation to the rest of Spain has always been higher (perhaps because it is a big city the figures increase). We can't compare Barcelona with Santander either, can we?

Robberies, the most common crime in Barcelona

Robberies with violence and intimidation have varied in Barcelona by -33.22% in 2020 compared to the same period last year. In total, since the beginning of the year until quarter 3 of 2020, 7,212 robberies were recorded. In Barcelona the presence of pickpockets is very common. It is the theft par excellence in the city, so it is what you should watch out for the most.

To make sure nothing happens to you, we have created a list with some security tips :

The districts of Ciutat Vella and Eixample concentrated 70% of thefts in Barcelona and about 50% of robberies with violence, and tourists are among the most affected groups. The Raval police station records long queues for the numerous complaints from citizens, mostly for thefts, which can last up to three hours. However, there are many other neighborhoods in which you have to take into account. Here are some of the least safe neighbourhoods in Barcelona.

The Raval is considered the most unsafe neighborhood in Barcelona, according to indicators and data provided by the City Council. Like the neighborhoods of Ciutat Vella, they are affected by the perception of safety of the district is the lowest in Barcelona, and the percentage of crime by the number of inhabitants is the highest.

Ciutat Vella is the most unsafe district of Barcelona, according to all indicators. In terms of perception of insecurity, it is only comparable to Nou Barris. La Barceloneta, which is much more than a beach, is affected as a neighbourhood by the indicators of Ciutat Vella, and despite not being a violent area, mass tourism allows theft and petty crime.

El Polvorí de Montjuic is an area where it is better not to go. It is quite unsafe due to the drug trafficking chain that is set up there. If you don't want to get into trouble, there are very nice and safe areas of Barcelona waiting for your visit.

La Mina is, without a doubt, the neighbourhood you shouldn't go to. More drugs are trafficked and consumed in La Mina than in the whole of Barcelona. The venipuncture room in this neighbourhood of Sant Adrià del Besòs distributes a quarter of the official syringes distributed throughout Catalonia every day. Besides, there's nothing important to see, so it's best not to waste your time going there.

Sallent has affirmed that Barcelona "is a safe city" and that they have managed a situation of crime growth within low parameters in relation to the European context, and has valued very positively the results of the plan.

Despite all the things you've just read, not visiting out of fear is not an option. Besides, problems usually start when tourists do not take the right precautions. If you follow these tips you can significantly reduce the chances of something bad happening to you and you will be able to enjoy a trouble-free visit.

As we have said, all you have to do is take a few precautions, travel to Barcelona and have a great time!

add a comment of Crime and security in Barcelona