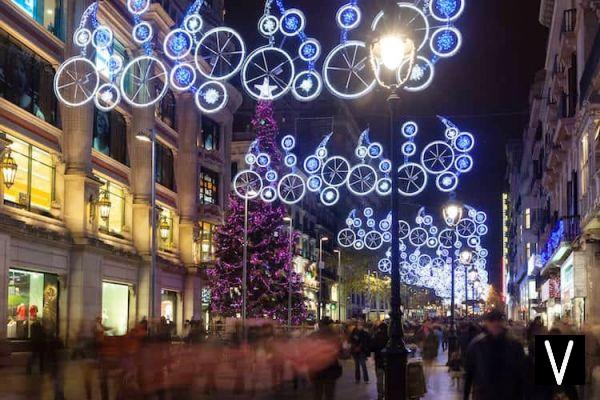 December in Barcelona: all over the city are lit Christmas lights, the cold is advancing, coats and scarves are long gone, the smell of churros is felt in the streets. We must make a virtue of necessity: is there no heat? Then everyone in the cafeterías to drink a hot chocolate, and then to see some exhibitions, to finish at some concerts or in some local with live music. That's the beauty of Barcelona: at any time of the year there is always something to do, this is a city that never leaves curious spirits unsatisfied.

Until Christmas Eve the oldest Christmas market in the city opens its doors: there are many traditions related to the Catalan nativity scene that can be bought in this market, some probably bizarre in our eyes, such as the tió de Nadal, the caganers and the zambombas, but we talk about them in more detail in our article on Christmas in Barcelona.

Another very large Christmas market, la Fair of Kings it is the ideal place to shop, perhaps warmed up with a chocolate con churros, on sale in the numerous stalls scattered around the streets.

Elton John it certainly needs no introduction, and so we won't. What we can say is that his concert is scheduled for Sunday 3 December, at the Palau Sant Jordi arena.

Another group that certainly needs no introduction, i Depeche Mode they also show up at the Palau Sant Jordi arena with their new world tour, Global Spirit. A concert with all the trimmings - it must be said, given the period - that could be an early Christmas gift for someone.

The 49th Jazz Music Festival in Barcelona is now coming to an end, but there are still pleasant surprises for December:

(December 27 - January 4, Montjuïc fair): For Barcelona families with young children this festival is a blessing, with shows, games and activities for the brats, all concentrated in one place. The festival is held inside the Fira de Barcelona, ​​basically in Plaça de Espanya. All useful information with timetables and how to get there are available on the official website of the event.

For those who want to celebrate the tolling of the bells in the square, do not miss the fireworks display in Plaça de Espanya, starting at 22:30 pm and well after midnight, and then fiesta to follow throughout the city. For more specific plans on what to do and how to get around, read our article on New Year 2021.

Best time to travel to Barcelona

New Year 2021 in Barcelona: all the info

Add a comment from December 2021 in Barcelona: hot even when it's cold!

This work is under a Creative Commons Attribution-NonCommercial-NoDerivatives 4.0 International License. 2021 / forbarcelonalovers.com