El Prat Airport: transfer to the center of Barcelona 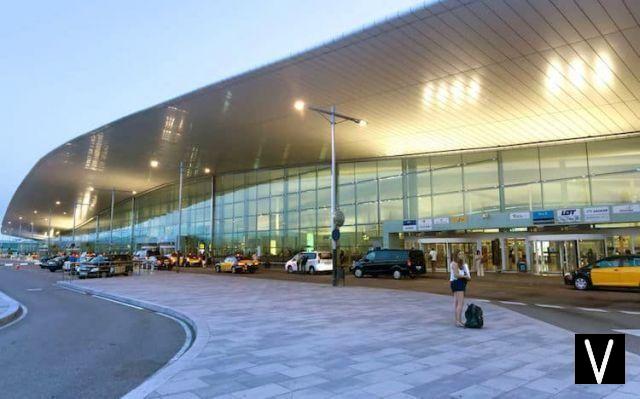 It is the second international airport in Spain, after that of Madrid-Barajas, and is the first in Catalonia and the entire Spanish Mediterranean coast, with over 35 million passengers passing through in 2014.

The airport's IATA abbreviation is BCN. The airport offers destinations throughout Europe and North Africa, including some intercontinental flights to the United States, Latin America and Southeast Asia.

The facility is divided into two passenger terminals, called T1 e T2. Recent changes in the airport structure have combined the three old terminals A, B and C into the new T2 terminal.

Generally terminal T1 is for flag carriers, while T2 is reserved for low-cost company.

The two terminals are connected to each other by a free bus line (shuttle), with a run scheduled every 6-7 minutes, with a travel time of about 10 minutes.

Both terminals have all the facilities typical of a modern airport, as well as numerous shops for clothing, electronic items, souvenirs, the main Italian newspapers can be purchased at the newsstands, and a pharmacy is available.

Bars and restaurants are located extensively throughout the airport, and inside them there are screens that allow you to control boarding.

In T1 there are also Duty Free shops, with limited access to holders of tickets for non-Schengen areas. There are also numerous hotels around the airport for the accommodation of travelers and on-board staff.

Connections between the airport and the city of Barcelona

El Prat airport boasts numerous means of connection with the rest of the city and the metropolitan area, offering different solutions for times and costs.

THEaerobus is a shuttle that connects the airport with Plaça de Catalunya in 35 minutes, with runs every 5-20 minutes, depending on the time. There are two lines, A1 and A2, which arrive respectively at terminals 1 and 2 of the airport. Both lines make intermediate stops:

The ticket can be purchased online or at the automatic ticket machines in front of the stop or on the bus, with a cost of € 5,90 for one way or € 10,20 if the return ticket is included (the service is free for children under 4).

The return trip must be made within 15 days of purchase, ed within 9 days of the outward journey. Free Wi-Fi service is provided inside the buses.

The Aerobus is included in the Barcelona City Pass.

The Barcelona transport network (TMB) makes several trips to and from the airport, making it the cheapest way to travel.

The connection to the city is guaranteed by the line 46, which connects the airport with Plaza de España. From here you can easily reach any point of the city by metro or bus.

Two are active night lines, N16 and N17, which connect various points of the city with the airport.

The single ticket costs 1,95 euros, however it is very convenient to buy a 10-trip pass (T-10), at a cost of 9,95 euros. Tickets and passes can be bought at kiosks or newsstands inside the airport.

In addition to direct lines to the city, several locations around the airport are served by dedicated lines.

Direct connection to the center of Barcelona is available with new metro line L-9 Sud and the two airport terminals.

Tickets can be purchased at the automatic cash machines in front of the entrance to the metro stops, and can also be used on bus lines.

At terminal T1 the metro station is on the ground floor. At Terminal T2 it is located outside.

These are connections with other metro lines.

Line 1 of the metro

Starting from the airport to the city center, the Torrassa station there is a connection with the metro line L1 (red line). Line 1 touches various central points of the city. You will have to take this line if your hotel or apartment is in the area: Placa de Espanya, Placa de Catalunya, Urquinaona or Arc de Trionf (Parc de la Ciutadella area).

Line 5 of the metro

All projects Collblanc station you can change to take the L5 metro (blue line). Line 5 passes through important areas such as: Diagonal (Eixample district), Verdaguer, Sagrada Familia and Sant Pau.

Line 3 of the metro

At the Universitaria stop (the last stop of the L9 south) you can change to the L3 line.

Line 3 covers a good stretch of the Avinguida Diagonal, and then goes down to the port area. Among the most important stations we find: Metro Tarragona, Gran Via-Pl. Espanya, Poble Sec, Parallel, Drassanes (the station is located a few steps from the Ramblas near the Columbus Statue). After this station the ascent on the Ramblas begins and we find the stops: La Rambla-Liceu, La Rambla, Catalunya and Passeig de Gràcia.

I travel times of the metro they are not very fast. In fact, it takes about 1 minutes from terminal T70 of the airport to Placa de Catalunya station. With the A1 aerobus the time is about 45 minutes.

Il cost of the single ticket is € 4,50 valid for any metro station in Barcelona. The Hola BCN Card (available at both T1 and T2 terminals), the Barcelona Card and the T-Dia (day ticket) can also be used.

Terminal T2 is connected to the train station of the line R2 area of Renfe with a covered walkway, without the need to go outside.

The R2-north directly connects the airport to the station Clot d'Aragó, and up to France Station with direct transfer, making several intermediate stops. Transshipment can be made at all stations up to El Prat.

Trains run every 30 minutes, the first leaving at 5:21 am and the last at 22:55. The list includes travel times, as indicated by Renfe.

To go to the airport, from Clot onwards it is necessary to take the trains with destination Airport.

The R2-south it connects the south-western metropolitan area with the airport, stopping at Vilanova i la Geltrú, Sitges, Castelldefels, Gavà and Viladecans stations.

It is always necessary to change at El Prat station (the train to the airport arrives on the platform next to the arrival one). The first ride leaves at 4.42 from Vilanova, the last one at 22.19.

The ticket for any destination costs 4,10 euros (corresponding to zone 4), and can be purchased in the numerous automatic cash desks inside the stations.

Taxis are also available during the night, with dedicated stops at the exit of each terminal. The journey between the airport and the city can take 20 to 40 minutes, depending on traffic.

An average fare to Plaça de Catalunya is around 26 euros, which can go up to 30 at night or on holidays. A standard rate of 39 euros is applied from the airport to the pier for cruises.

Audio Video El Prat Airport: transfer to the center of Barcelona
Where to sleep in the Ramblas ❯

Barcelona Card: what it is, how much it costs and when it is convenient

add a comment of El Prat Airport: transfer to the center of Barcelona