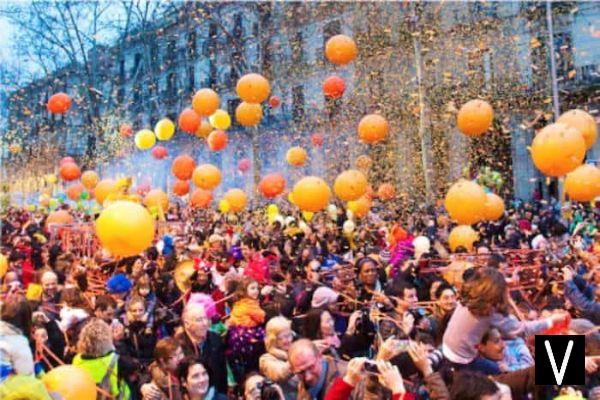 Live Barcelona in February it is very beautiful, the temperatures are starting to be favorable and the colors of the city are much more evident.

After Christmas and the New Year, Barcelona prepares for Carnival and Valentine's Day - two events that have always been much loved and sought after.

Let's see together everything we can see in Barcelona during the month of February.

From 8 to 12 February is celebrated the Celebrations of Santa Eulàlia, an event dedicated to the patron saint who is expected as the Festes de la Mercè.

It all begins with a light show that is projected on the wall of the town hall and then goes on with three days of music, folk dances, Catalan dances, masses and choral concerts inside the Barcelona Cathedral.

During the rich program full of events, are not to be missed the correfocs or the fireworks accompanied by Fire-Breathing Devils traditional and impressive, such as the Trobada de Gegants - the grotesque parade of papier-mâché figures throughout the city.

Particular attention to some museums, which during Carnival, offer thetotally free entry.

Since 28 February at 6 March, along the districts of Barcelona, ​​Catalan Shrove Tuesday is celebrated with the Sitges Carnival. Lots of people who dress up in an eccentric and fun way, dancing along the streets of the city: the best moments are those dedicated to children during the day and adults at night, who invade the streets with their contagious and regenerating joy:

The winter sales began on January but will continue for mid-February. Barcelona opens its doors to wonderful incredible discounts to take home some item of clothing or object that has been spotted for some time. Where to go to get the right deals?

A great competitive event that passes near the Arc de Triomf, Ipaseo marítimo, along the Avenida del Paral·lele and the Gran Via de les Corts Catalanes. Then continue to Forùm towards Passeig de Pujades and the beaches, joining the race also the magnificent setting that the city offers.

Lovers of F1? The Spanish circuit of Montmelo is home to the winter tests before the definitive season begins. Dates are on 18, 21 and 26 February.

Not everyone knows it but in Barcelona Valentine's Day is celebrated in date 23 April, on the day dedicated to Sant Jordi: on that occasion, tradition has it that lovers exchange a flower and a book.

This doesn't mean you can't pass a February 14 in the name of romance with some very special events.

For example, you could start the day by having a characteristic breakfast at the Flax Kale in Carrer dels Tallers with a choice of delicious pastries, or at the Federal Cafè where you can try a respectable brunch. If, on the other hand, you prefer to have a luxurious style breakfast, just go to La Pubilla where you eat with a knife and fork, as per tradition.

For a breakfast in Catalan styleinstead, you will have to go to the Pinotxo Bar in Carrer la Rambla, the kiosk of Mercat de la boqueria.

For the more romantic, it is recommended to rent a rowboat at the Parc de la Ciutadella, to take a ride along the park and stop for a picnic based on Catalan beer and sandwich with Jamòn Ibérico.

According to the lunar calendar, the February 5 is the Chinese New Year with the entry into the year of the Pig. In Barcelona there are more than 19.000 members of the Chinese community and every year, the city dedicates time and dedication to the preparation of events dedicated to them.

You can watch the Dragon dance and the Lion dance, the fireworks display with lights and colors to chase away evil spirits and then finish with the famous Festival of Lanterns.

Do not forget all the stalls that will be found along the streets of the city, with interesting gastronomic proposals and handcrafted.