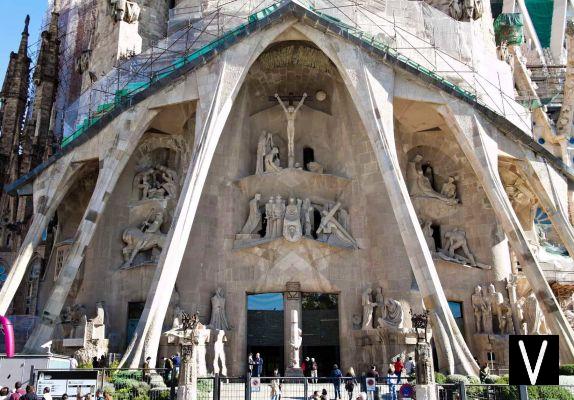 There have been 5 generations since the imposing work of the Sagrada Familia, in full el Expiatory Temple of the Sacred Family, was begun. Even today, the works have not been completed, but they are constantly proceeding and it is estimated that they may be finished in 2026.

Useful information for the visit

How the visit works

The visit to the Basilica alone takes a maximum of one hour.

Tickets for visit the towers they are not included in the general ticket for the Sagrada Familia, but a separate ticket must be purchased.

Of the 18 towers planned, 8 have been completed at the moment: 4 on the Nativity facade and 4 on the Passion facade.

You get to the top with the lift, while the descent is only foreseen on foot.
È forbidden entry to the towers to children under 6 years old. Up to the age of 16, children must be accompanied by an adult.

Where is the Sagrada Familia

The Sagrada Familia is located in the center of the district of the same name is part of the Eixample of Barcelona, one of the most beautiful and highly rated residential areas in the city. If you are looking for the trendy and party life of Las Ramblas, this is not the place.

The neighborhood, in fact, is quiet, there are not many places for nightlife, but many artistic attractions and various shops. A market, not tourist like that of la Boquería, where you can find excellent meat, fish and vegetables, a real popular market.

Right here, in this neighborhood, there are several restaurants with special menus and cafes with delicious refined sweets.

Excellent connections: to get to the Sanctuary you can take the L2 or L5 metro and get off at the Sagrada Familia stop, or buses, there are several, including 19, 33, 34, 50 B20.

Entrance tickets can be purchased online and serve to finance the continuation of the works. There are several types of tickets:

Children up to 10 years enter free trial, as well as religious, people with a proven disability of more than 65% plus an accompanying person. Discount for students under 18.

Sleeping near the Sagrada Familia

The Sagrada Familia is located in the Eixample district, in a very central and convenient location due to the metro stop right in front of the Church.

It is a very quiet area with few clubs, perfect for families. More info on where to sleep in Eixample.

Hotels in the area

Where to eat near the Sagrada Familia

The Acorn (298 of Carrer de la Marina 298), just a stone's throw from the Sagrada Familia,
offers typical Spanish cuisine where obviously there is no shortage of tapas and an excellent sangria.

Fidalga Barcelona (Marina Street 290) is a restaurant that mainly offers (real) Italian cuisine, as there is an Italian chef, with authentic Italian products.

La Pedreta (Carrer De La Marina, 271) is a small restaurant serving Spanish cuisine. You save by choosing the menu of the day.

Although my advice is to immerse yourself in the local culture also from a culinary point of view, it is good to know that in the immediate vicinity of the Basilica there is a Mc Donald's (Carrer de Provença, 427) and a KFC (Av. De Gaudí, 2 ).

History of the Sagrada Familia

It was 1874 when theSpiritual Association of Devotees of St. Joseph, founded in 1866, decided to promote what would prove to be one of the most majestic projects in the world: the construction of the Expiatory Temple dedicated to the Holy Family.

The first step was to buy some land, almost 13.000 square meters, thanks to some donations received. But the construction of the building, known above all for being the masterpiece of the architect Antoni Gaudí, was initially assigned to the architect Francisco de Paula de Villar.

La first stone it was posed on the occasion of the feast of San José on March 19, 1882.

The works were handed over to Gaudí starting the following year, when the previous architect came into conflict with the members of the Association.

Antoni Gaudí, who with due merit is the best known architect of Barcelona and all of Spain, worked on the construction of the temple for 43 years until an unfortunate accident ended his life in 1926 (Gaudí was hit by a tram).

The first part built under the leadership of Gaudí was the crypt, completed in 1889, but thanks to a large donation, the architect put his hand to the original project and completely changed it, designing a new work with greater intentions.

The new church envisioned by Gaudí would have been a true innovation, both in shape and size, and would have expressed through architecture, lights and colors, a emblematic symbolism.

The project included the creation of 3 facades. The first to be built was that of the Nativity and not by chance. Gaudí himself claimed to have started from that one because it was definitely worked and would have kept people's attention awake, and this was important since the works were financed with donations.

Il first bell tower of the facade of the Nativity was completed in 1925, but a year later, the project stopped due to the tragic death of the architect.

Gaudí was buried in the Carmen chapel in the Sagrada crypt and his mortal remains are still there today.

The direction of the works was thus entrusted to Domènec Sugrañes, a close collaborator of Gaudí. Under his direction the bell towers of the facade of the Nativity were completed and the door of Faith.

The works stopped due to the bloody Civil War, but resumed in 1938 under the direction of Francesc de Paula Quintana who mostly had to be based on reconstructions obtained thanks to some photographs and projects that survived the war. The works then continued to follow Gaudí's original idea. From 1986 the works were entrusted to the sculptor Josep Maria Subirachs who concluded the facade of the Passion and followed the construction of the building for twenty years. 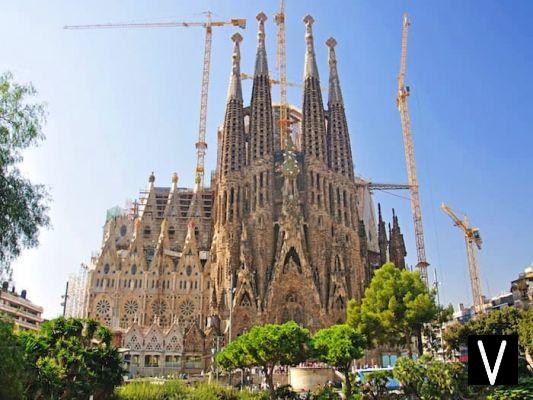 Although the works are not yet completed, the Sagrada Familia reflects Gaudí's intent: to deeply mark the urban landscape of Barcelona, ​​but without opposing the divine grandeur expressed by the Montjuïc hill, of which it is much lower. Nevertheless, the Sagrada Familia ranks, with its 172,5 meters, among the tallest religious buildings in the world.

The building evidently refers to thegothic architecture, although with substantial modifications made by Gaudí in order to obtain a style as original as possible.

There are three facades, of which only one, that of the Nativity, was completed by Gaudí. They each represent emblematic moments in the life of the Christ: birth, passion, death and resurrection.

Inside, 5 naves with 3 transepts forming a Latin cross. Majestic and imposing, the Sagrada Familia stands proud in its verticality, strongly desired by Gaudí. The symbolic intent was to rise towards God, reminding the outside of a pyramid.

At the end of the works, the domes will be 4, about 40 meters high, placed at the 4 corners; the towers will be 18: 12 lower on the facades (the bell towers about 100 meters high) and representing the 12 apostles, and the 6 highest in the center to form a pyramidal structure.

The tallest of these will represent Christ and will be 172,5 meters high. Around this will rise 4 towers of 135 meters that will represent the 4 evangelists and their gospels. The Virgin Mary will be represented by another tower that will cover the apse. 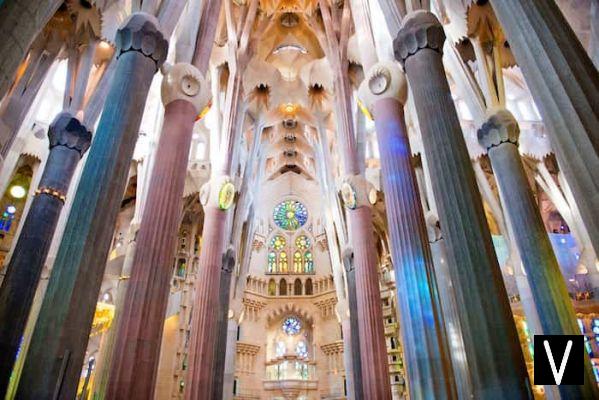 Gaudí had a well-defined project for the interior of the Sagrada Familia.

The arrangement of the columns that play with the lights that filter from the outside and break on the polychrome windows had to remember the light that filters through the branches of the trees, and in fact, entering the nave and observing with an overall look, the sensation is precisely that of being in a wood. If you expect a church full of trappings and ornaments, perhaps, you risk being disappointed.

The interior is a continuous play of lights, colors and unlikely architectures made of worked stone, no glories, but just look up at the vault to understand the magnificence of the place. You enter from Passion facade overlooking Carrer Sardenya.

You enter the main nave where the tree columns are located. The apse is surrounded by columns. The architecture of the latter is inspired by the canons that are defined as neo-Gothic and consists of 7 polygonal chapels that celebrate pains and joys.

These are accessible uphill by lift, you also queue to go up, and once outside you find yourself face to face with the majestic gargoyles and the architectural evolutions that peek out from the slits.

The view that opens up over Barcelona is unmissable, although you cannot get to the top. You go down on foot through steep spiral stairs. You can also visit the crypt, but only in the moments preceding the religious services.