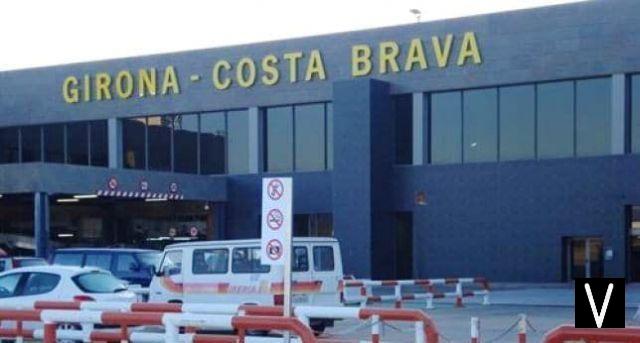 THEGirona airport is located in the municipality of Vilobí d'Oymar, 12 km from the city of Girona ea 90 km Barcelona. It is the second largest airport in Catalonia, after Barcelona El Prat. Girona airport became famous in its time for being the main Ryanair airport to go to Barcelona, ​​currently the Irish company lands most of its flights directly in El Prat, so the number of flights to Italy shrank. There are currently three direct connections between Girona and Italy, all operated by Ryanair:

Vueling currently offers direct connections from Cagliari and Pisa to Barcelona El Prat, but not from Pescara. If you are simply looking for the cheapest flight, you have to add the costs to reach Barcelona from Girona airport, which are in the order of € 10-20 depending on the vehicle and the changes you want to make, as we will explain further below.

Of course landing in Girona makes sense if you are interested in visiting the Costa Brava, the Pyrenees or Southern France. In the first case, you can do it easily by public transport, in the other two it is better to rent a car directly at the airport.

Connections from Girona to Barcelona

Buses arrive at the North Station (with stop at Sagrera), near the center, while the trains arrive at the Sants station, located in the western part of the city. The costs are similar, in general the bus is slightly cheaper if you take a return ticket (ida y vuelta), but the train has a greater number of connections, with the advantage, once you arrive at the station, to be able to get off directly in the underground station below.


Getting to Barcelona by bus from Girona

The Sagalés transport company is the main line of bus, and directly connects Girona airport with Barcelona:

From Girona to Barcelona by train

In Girona, the bus station and the train station are located opposite each other: to reach them from the airport there is a special urban line, which runs approximately every 30 minutes (during rush hours) and arrives directly in front of the bus station: cross the street and you will be in the train station. Tickets cost € 2,75, and the bus takes 25 minutes to get there

From the Girona train station there are around 30 daily connections to Barcelona - Sants station.

To get to the Costa Brava from Girona Airport you almost always have to go to the Girona bus / train station. From the airport there are direct connections, but they are quite sparse, and almost never coincide with the arrival times of planes from Italy.


Rent a car at the airport

If the goal of the trip is not Barcelona, ​​but to visit Catalonia or the Costa Brava, the best thing is rent a car directly at the airport, thus avoiding to depend on the timetables of public transport (the more isolated pueblos, as well as some characteristic beaches, may only have one or two trips a day). There are several companies with an office inside the airport, from where it is possible to directly pick up an already booked vehicle, or to rent it out. Companies in general are open from 8:00 to 23:45. The operators are:

Prices and offers are variable depending on the time of year, we advise you to use a price comparator to see which is the cheapest rate.

Main localities in the surroundings

Girona it is the second largest city in Catalonia, after Barcelona. Hard core of Catalan independence, it is considered one of the cities with the best quality of life in Spain; it is famous for its well-preserved medieval old town, and for its characteristic protruding houses (cases penjades) on the Onyar River. The city is in a strategic position to control access to France, and over the centuries it has experienced numerous sieges by different armies, the signs of which can still be seen on the important walls around the old city.
La cathedral is the main monument of the city. Located in the beautiful Cathedral Square, inside the medieval old town, it is a church of medieval origin, remodeled several times over the centuries, consisting of a single large Gothic nave, with a beautiful Baroque facade. The cathedral museum is located in the same square, and also allows access to the medieval cloister, very well preserved. The ghetto of Girona it contained within it, until 1492, one of the most important Jewish communities in Spain, the remains of which can still be seen in the local Jewish museum.
Il archaeological Museum was created within the monastery of Sant Pere de Galligants, from the Romanesque period, with another beautifully made cloister from the same period. The museum's collection extends from prehistoric to medieval times, including some important Roman mosaics and medieval jewelry.
Le mura they are completely passable, and allow you to enjoy a unique view over the whole city. Of medieval origin, they have undergone several changes over time in order to adapt them to the advancement of siege tools. It takes a couple of hours to complete them.
Il Devesa Park it is one of the largest city parks in Spain, with over 40 hectares of extension. Developed in the Napoleonic era, the park is located at the junction of the Onyar river with two other streams, and has numerous paths and walks inside. Numerous cultural and popular events are held in the park throughout the year.

Lloret del Mar is the main tourist resort of the Costa Brava, and is approximately halfway between Girona and Barcelona. Famous for its white beaches and its nightlife, it is a well-equipped tourist destination, able to satisfy travelers with different needs. The country experienced a great development during the XNUMXth and XNUMXth centuries, thanks to the trade of its inhabitants with America. Some inhabitants, after making a fortune in the colonies (especially in Cuba), returned to their native country, building noble palaces currently known as Houses of the Indianos, in neoclassical or modernist style, thus enriching the urban landscape. At the turn of the 900th and XNUMXth centuries, Lloret del Mar became a trendy destination for Barcelona's wealthy families, who had their summer residences built there, some of which are interesting examples of Catalan modernist style. This enrichment of the town's economy allowed the construction, in the early XNUMXs, of the Gardens of Santa Clotilde, an Italian Renaissance-style park with an exceptional view of the sea, and the modernist renovation of neo-Gothic church of Sant Romá. More information can be found in our guide to Lloret de Mar, including how to get there and where to eat a good paella.

How to get around Barcelona