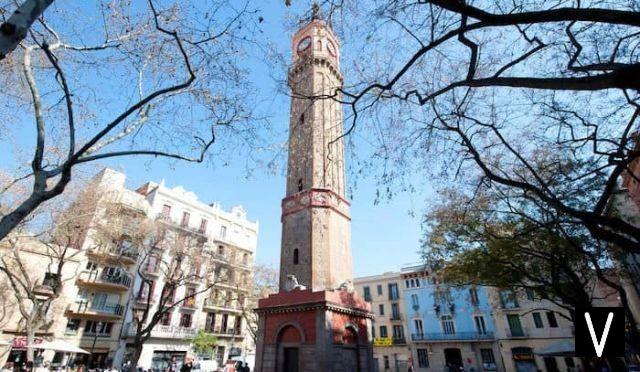 This route, perhaps less touristy, but no less interesting, extends through the narrow streets of district of Gràcia.

Although today it is one of the most beautiful neighborhoods in Barcelona, once Gràcia was an autonomous municipality, annexed to the city at the end of the XNUMXth century.

In the neighborhood you can go through its narrow streets, which still give it the appearance of a village, and discover the various corners of modernist architecture scattered around it.

We begin the journey in Parc Güell, and then enter towards Gràcia from there, descending to the Fuster house, near Passeig de Gràcia.

The complete path measures about 4 km, and it is slightly downhill, so it may be ideal to take advantage of a sunny day to rent a bike, pedaling without particular effort along the gentle slopes of Gràcia.

If you have already seen Parc Güell, or you want to take a shorter route, you can start from Lesseps station (line 3), thus reducing the total to 2,9 km, to Diagonal station (lines 3 and 5), the end point of the path.

What to see in Gràcia

Parc Güell was originally designed by Antoni Gaudí like a new exclusive neighborhood with 60 villas surrounded by greenery. The results of the sale of the lots were very bad and over time it was converted into a public park.

You can get to Park Güell from the Lesseps or Vallcarca metro stops, both on line 3.

The large central square is certainly worth seeing, with its privileged view of the city, framed by an undulating bench in trencadís, the work of M. Jujol.

Gaudí also took care of the arrangement of trees and paths inside the large garden of the park, with arcaded galleries, fountains, columns, all adapted to the context according to the fervent imagination of the famous Catalan architect. You can read more about Parc Güell, with directions on how to get there, times and entrance fees, on this page.


Visit Park GüellDiscover all the info

From the park exit located in Carrer d'Olot, go down the Avenida Santuari Sant Josep de la Montaña to the end, crossing the Travessera de Dalt, follow it to the right, and you will arrive at Plaça Lesseps, with Casa Ramos, the next stop on our itinerary.

Casas Ramos is a another jewel of modernist architecture: designed by the architect Jaume Torres in 1906, it consists of three separate buildings joined by a single facade.

The complex is recognized for its characteristic yellow color and the original shape of the facades. Inside, also, in the patio, there is a small marvelous modernist enclosure: the patio is located on the corner with Carrer Mont-Roig, on the back side of the house complex.

The building also has a certain notoriety for being used as a film set for the film All About My Mother, by Pedro Almodóvar.

From Plaça Lesseps now walk towards Carrer Grand de Gràcia: it is easily recognizable, as it is a pretty street, full of bars, shops and restaurants. Follow the Carrer towards the sea until you cross Carrer Carolines on the right. 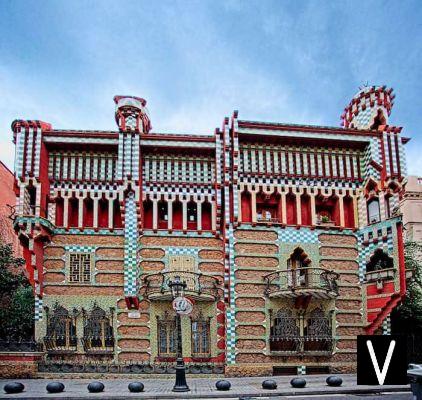 In Carolines Street, at 74, you will find one of the first important works of Antoni Gaudí, Casa Vicens.

Originally it was a summer house, outside the city at the time. The house was a commission from the ceramics manufacturer Manuel Vicens, who wanted, in addition to building his own home, to advertise the constructive possibilities of the products he sold, namely the azulejos.

Construction of the house began in 1883, and ended 5 years later. The references to the owner's wishes are constant, and are manifested by the extensive use of green and white azulejos, used to cover a good part of 3 sides of the house.

Gaudí combined these materials with simple red brick, subsequently enriched with plaster applications, decorative paints and a skilful craftsmanship of wood and wrought iron. The shape of the house is inspired by Asian art.

The entrance gate is built entirely of wrought iron, with the curious leaf shapes of margallón, a native palm of Catalonia, represented here with an authentic work of art.

The Mudejar influences in this building are highlighted in the room called el fumadero, dominated by a Mudejar ceiling in colored plaster, and by the intricate floral decoration. Casa Vicens is one of the most interesting modernist buildings in Barcelona, ​​unfortunately the interior cannot be visited as it is currently private property.

Back on the Gran de Gràcia, continue towards the sea until you meet the most modernist street in the whole neighborhood: the Rambla del Prat.

La Rambla del Prat is the street with the most modernist examples in the Gràcia neighborhood, with a good number of residential projects. The current road stands on an area that had remained rural until 1890, urbanized following the growth of the city at the turn of the nineteenth and twentieth centuries. On the Rambla del Prat the first shops of the neighborhood were also built, making it the nucleus of the social life of the time.

Among the numerous examples of architecture present along the Rambla del Prat, the Bosc Cinema it is undoubtedly the most important: an ancient theater converted into a cinema in 1905, in the midst of the modernist explosion, with decorations by Pau Gargallo. Among the various characters represented, there is also Pablo Picasso, a friend of the sculptor.

At number 21 instead you can observe the Almost Joan Fatjó: designed in 1904 by Domènec Boada i Piera, they appear as houses with the upper floors richly decorated with floral motifs.

Returning to Gran de Gràcia, almost opposite you can find the Carrer de Astúries. Follow it to the end until you reach one of the most characteristic squares in the neighborhood: Diamond Square.

From the Plaça, take the Carrer de l'Or, where another modernist attraction of the neighborhood is located: Rubinat House.

Work created by the architect Francesc Berenguer in 1909, it is recognized for its wrought iron balconies, and for its facade decorated with white natural shapes on a reddish background, giving it a very original aspect.

From Carrer de l'Or you can continue turning into Carrer de Torrijos, continue to number 14 where you can see another work by the same architect Berenguer. 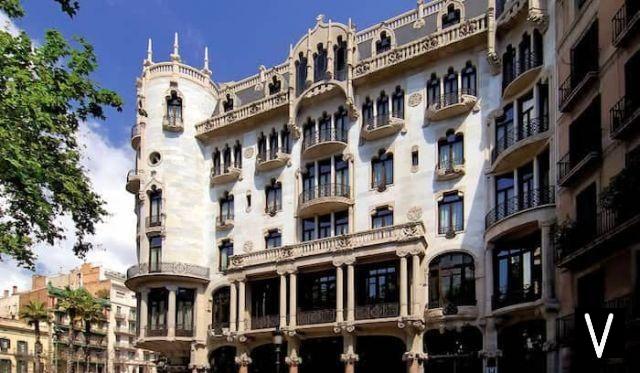 Go back to Carrer Gran de Gràcia, and go down until you cross Carrer del Cigne, take it and continue to Plaça de la Llibertat, home to the homonymous market.

Il Freedom Market it is still today one of the largest in the neighborhood, and alone it would deserve a morning excursion to get involved in the richness of aromas and flavors, as well as to visit the lively surrounding area.

Lovers of modernism will also be able to admire various elements incorporated in the iron roof of the market, especially on the facade, the work of Francesc Berenguer i Mestre and Miquel Pascual i Tintorer. In the market there are also some bars where they serve tapas, with very affordable prices.

Exit the market, go back to Carrer Gran de Gràcia, and continue going down towards the sea, until you reach the Jardinets de Gràcia.

In front of the entrance you can see August Font's 1906 banking office, still in operation and currently occupied by the La Caixa group.

Along the Jardinets, you will be able to see two significant buildings: the Fuster house, and just opposite the House of the Four Busts.

Casa Fuster was the last work of the architect Domènech i Montaner in Barcelona.

It is a neo-Gothic building with three white marble facades and a grandstand at the corner, a typical solution among those adopted by Domènech i Montaner.

The building was supposed to be completed with a tower similar to the one existing in the Sant Pau Hospital, but was never completed.

The building now belongs to a chain of luxury hotels, as does its café: the Vienès, which, together with the adjoining ballroom, the Danube, has long represented one of the city's privileged meeting places.

The Diagonal metro station (lines 3, 5, with the underground interchange for line 7) is very close, and from there you can easily reach every corner of the city, otherwise, you can continue along Passeig de Gràcia, a short distance away. you can find Casa Milá and Casa Batlló, up to Plaça de Catalunya.

The Sagrada Familia, on the other hand, is about 2 km from Plaça de Juan Carlos I.

Where to eat in Gràcia

A restaurant located in the heart of Grace district it has very few tables and is equipped with an informal, simple but - at the same time - very nice furniture. The staff is highly qualified, friendly and always attentive to the various needs of guests. Ideal for couples, families and for those who want to stay in a quiet place that transmits good humor.

Do not miss the specials and dishes of the day, with variations for vegans and vegetarians with a very rich dessert trolley.

La Polleria fontana it is a spartan, simple place and seems to have stopped in another era precisely because of the unmodern furniture that offers an atmosphere far from the cheerfulness of Barcelona.

Despite this, the staff is prepared, friendly and always attentive, as well as ready to transform a small space into a large one. Few places but well arranged for your privacy, especially if you are a couple and if you are on their honeymoon; for a group of friends booking is recommended as it has few seats.

A place typical, small and traditional, with a very friendly and contemporary atmosphere. Inside there are no tables but you can eat directly at the counter, served by qualified staff. The prices are low but the portions are very large, ideal for groups of friends or to be able to taste all together many types of dishes with right proportions. Not to fear a possible request for a variant both in case of intolerances and in the case of vegan - vegetarian preference.

Do not miss the desserts, traditional and handmade, which the staff always offers with great enthusiasm.

Un typical and traditional place, frequented by locals and less by tourists. Small but well laid out, you are greeted by the owner at the entrance and then accompanied directly to your table, in total privacy. Professional staff and prepared, multilingual and ready to recommend the dish of the day or what to eat according to your personal taste.

You can taste traditional dishes served with fish and fresh meat, with some variations in order to satisfy even those who eat only vegetables or have different types of intolerances.

Un hidden place in the heart of Gràcia which must be found or recommended. A familiar and informal atmosphere, medium in size and with well arranged tables. Very attentive and friendly staff who accompany guests through the choice of the dish to taste or the best of the house.

It is a very pleasant environment dedicated to couples, families with children or groups of friends on vacation who want to discover traditional tastes, ideal for every palate. There is no shortage of variants in case of vegetarian - vegan - or celiac requests.

An important note is on the desserts served in typical Tapas style, with tastings various always excellent.

A delightful restaurant that offers its guests not only asophisticated and refined atmosphere, but also excellent Argentine cuisine proposed by the owners, or husband and wife. Spouses and staff accompany customers through the best choice of food and drinks.

Do not miss the homemade desserts as per ancient tradition, with particular tastes typical of Argentine cuisine. Many locals recommend it to tourists this venue just to taste typical dishes or to try something new, innovative and made by expert hands.

Route map: what to see in the neighborhood

What to see nearby

This work is under a Creative Commons Attribution-NonCommercial-NoDerivatives 4.0 International License. 2021 / forbarcelonalovers.com