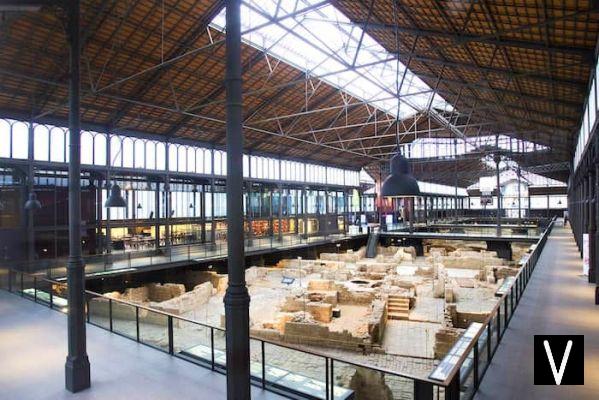 Il Born Cultural and Memory Center (in Catalan Center de Cultura i Memòria del Born, or Born CCM) is a center dedicated to the exhibition of exhibitions of an artistic and cultural nature. Built inside the ancient Born Market, it was opened in 2013 after a long preparatory work to make its archaeological site accessible.

History of the Born Market

The Born Market was born in 1876, as first structure in glass and iron of Barcelona, ​​demonstration of the economic vitality of the Catalan city in the XNUMXth century. The location was chosen for his proximity to France Station, with the idea of ​​making it one of the most important markets in the city, but it was transformed after some time into a wholesale market, due to the low turnout. In 1971 the market was closed, and a first restoration began. At the end of the 90s it was decided to reuse the market to house a library, but during the preparatory work the remains of the houses destroyed after the war of the Spanish succession of 1714 were found.

The city had rebelled against the Bourbon domination, and had been reconquered after a violent siege. King Philip V ordered the construction of an imposing military citadel, with a fortress that could control both strategic access to France and Barcelona itself, at the time considered among the most revolting cities in all of Europe. A part of the district of La Ribera was thus razed to the ground, to create a huge esplanade around the citadel. The citadel did not have a long life: deeply hated by the people of Barcelona as a symbol of the oppressive power of the Bourbons, it was dismantled during the revolution of 1868, to make room for the current Parc de la Ciutadella. Some areas closer to the center were used to build public buildings, such as the Estació de França and the Born market itself.


The archaeological site and the permanent exhibition

Inside the Born field you can see some complete streets, with the foundations of at least 60 houses, distributed in three distinct parts, which perfectly represent the complexity of the urban and social fabric of the La Ribera district from the XNUMXth to the XNUMXth century. A large amount of archaeological finds have been found in the deposit, visible in the permanent exhibition: most of them are ceramics, but glass, iron, bronze or copper objects, stone elements and even clothes and objects have also been found. leather. Several Italian ceramics present on the site, testifying to the commercial importance that Barcelona had assumed in the XNUMXth century: among the production cities there are Genoa, Faenza, Pisa, Savona, Albisola and Montelupo, as well as some glass from Murano.

Prohibited Vibracions - Pop Music and Discographic Censorship (from 24 May to 28 August 2016). Rock music became the object of censorship by the Franco dictatorship starting from the decade of the 60s, at a time when this music was beginning to form part of the popular culture of young Spanish people. The exhibition features censored record covers, showing the original drawings and the censored versions that are edited in Spain, interesting to understand some aspects of Spain during Francoism.

How to get to Born CCM

The Born Cultural Center is located in Plaça Comerçal 12, at the lower end of La Ribera, near the church of Santa María del Mar. All metro stations are located approximately 4-500 meters from the Born. CCM: Jaume I, Barceloneta , Ciutadella-Vila Olimpica (all on line 4 yellow), and Arc de Triomf (L1 red). By Bus Turístic you have to take the red line and get off at the Parc de la Ciutadella - Zoo stop. Numerous buses and suburban trains pass or arrive at the nearby Estació de França.

During the summer hours (from 30st March to 10th September) the Born CCM opens from Tuesday to Sunday, from 00:20 to 00:19. In winter it closes at 00:20, except on Sundays and holidays, these days it closes at 00:24. The Born CCM is closed every non-holiday Monday, in addition to January 25st, May XNUMXst, June XNUMXth and December XNUMXth.

The cost of the full ticket is 4,40€, and includes both access to the archaeological site and exhibitions. Reduced admission costs € 3,08, those aged between 16 and 29 or over 65 are entitled to it. Children under the age of 15 and holders of the Barcelona Card, on the other hand, can take advantage of free admission. Those who have the Bus Turístic discounts pay € 3,52. Every first Sunday of the month all day, and every other Sunday from 15:00 pm until closing, you can visit the permanent and temporary exhibitions for free.

Audio Video He Born CCM
Barcelona in September: all the events not to be missed ❯