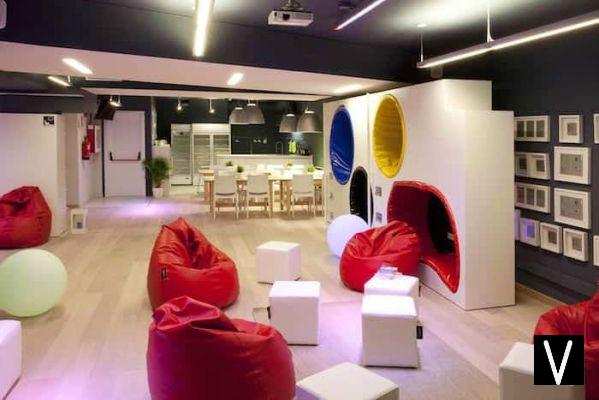 Barcelona is one of the most popular destinations for young people, and it is not difficult to understand why: in addition to offering a varied nightlife, housing costs are cheap compared to other major European and non-European cities.

Compared to the past, when the hostels were all located around the Ramblas and the customers were mostly young people in their first travel experience, today's situation has changed: the municipality of Barcelona has made great efforts to reduce the excesses of the Catalan fiesta, to aim for a more sustainable and responsible tourism.

At the same time, the strong competition, and the arrival of web 2.0, has brought the most dilapidated structures out of the market, and improved the general offer, allowing even realities far from the most touristic areas to offer themselves as valid alternatives. Today, most hostels include the free wi-fi and dormitories with more reasonable spaces, providing the possibility of check-in during the 24 hours, and, in some cases, the proposed offer is comparable to superior category hotels.

Finally, one can add another advantage: in almost all reception areas, more and more employees speak Italian.

Unlike other countries, the hostels in Spain tend to be very cheap in the city center, due to competition and wide offer. Cheaper hostels will tend to have more basic services, with a price that increases depending on the type of offer, or if the hostel is located in a historic building.

Those who arrive during the summer may prefer a hostel in an area closer to the beaches, although taking into account that some structures offer a swimming pool or a solarium among their services: in this case it is advisable to book well in advance.

Choosing a hostel in Barcelona

Choosing a hostel can affect the outcome of a trip: being close to the neighborhoods you intend to frequent is certainly a good saving, both in money and time, consequently having clear ideas on what you want to do greatly helps in the choice. of an accommodation suitable for your needs.

On the other hand, Barcelona it is a city of small dimensions, especially when compared to other cities such as London or New York; for example, you can reach Plaça Reial (about halfway up the Rambles) in 30 minutes from the Gràcia district, located north of the center, so you can hardly end up in a hostel really cut off from the city.

The area with the greatest concentration of hostels is that of Ramblas: it is certainly the place in Barcelona that offers the most international breath; probably along the Ramblas it will be more common to hear people speaking English, German or Italian on the street (or in a hostel) than Spanish or Catalan. The choice is excellent from a strategic point of view: from the Ramblas you can easily reach any other destination in the center with a few minutes' walk, without having to take public transport.

Backpackers from the north, essentially from Girona or France, may have an added advantage in choosing a hostel in the neighborhood, given the neighborhood's proximity to Estació del Norte, where buses from those locations arrive.

A different choice awaits those who decide the neighborhood of Grace as your own accommodation. Compared to the other districts of the city, Gràcia maintains its own specific rhythm, different from the rest of the city, which recalls its origins different from the rest of Barcelona. There fair of Gràcia, held in August, is a major event in the neighborhood, so you need to book accommodation well in advance.

Those arriving in the summer might consider hostels close to the beaches, such as a Raval and New town. Having the beach just a few minutes away is ideal during sultry days, when walking around the city could be a challenge not easy to overcome, with the possibility of staying in areas full of events and well connected to the rest of the city.