How to get around Barcelona 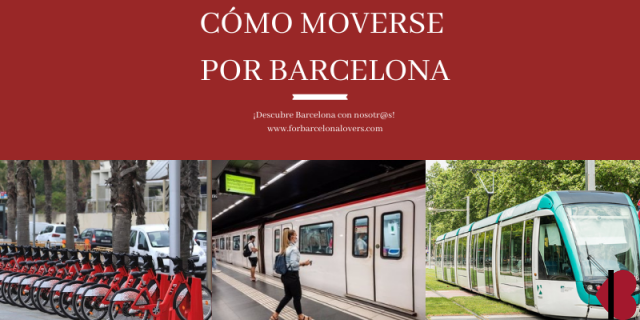 Are you thinking of coming to Barcelona but don't know how to get around the city? Don't worry! In ForBarcelonaLovers we have created a list with the best transports in Barcelona so you can move around the city without worrying. Let's get to it!

Get to know Barcelona's public transport

Barcelona is a very big city and if you are going to spend a few days here you will need to know how to get around Barcelona. That's why we have created a list with the most common and recommended ways to move around the city. In addition, we will tell you which tickets will be the most economical for your stay.

The metro timetables are as follows:

Barcelona has a great line of buses with which you can go to any point of the city. Day and night city buses (day buses are red and white, night and intercity buses are yellow and white) can be used in combination with other means of transport. This is a very common way of getting around Barcelona, and increasingly so, as it is safer than the metro.

two sections of tram (called Tram) in Barcelona (Trambaix and Trambesòs) which are divided into 3 lines each. The Trambaix starts at Plaça Francesc Macià and reaches towns such as Cornellà and Sant Feliu in the Baix Llobregat region. The Trambesòs starts at Ciutadella Park and Vila Olímpica and goes to Badalonà and Sant Adrià del Besòs.

Barcelona has another tram line with a recreational/tourist character. It is the tramvia blau (blue tram). It is an old tram with a single carriage that runs along the Avinguda del Tibidabo.

The train is another option, there are not as many stops as the metro, but it is perfect if you want to go to the outskirts of the city or nearby towns. Remember that if you are travelling outside the metropolitan area of Barcelona you have to see how many zones you are going to travel to buy the corresponding ticket.

Passes and tickets for public transport in BarcelonaAlthough

there are many options, in ForBarcelonaLovers we believe that the best for someone who is going to visit Barcelona in a week or who are passing through the city, are the following:

Get to know BarcelonaBicing private transport


Bicing is the bicycle rental service in Barcelona. In this case it would not be a way to move around Barcelona by public transport for tourists because they are designed for people who live in the city because they offer annual passes. It has 424 stations spread throughout the city and a network of exclusive lanes of more than 200 kilometers. The price is 50 euros a year and every time you take a bike you can use it for 30 minutes.

Taxis are a good option in Barcelona if you need to use public transport privately. Public because it is managed by a public entity and private because you go in a vehicle for you. It can be a good option for night transfers, to go to the city from the airport or, in short, for whatever you feel like.

add a comment of How to get around Barcelona