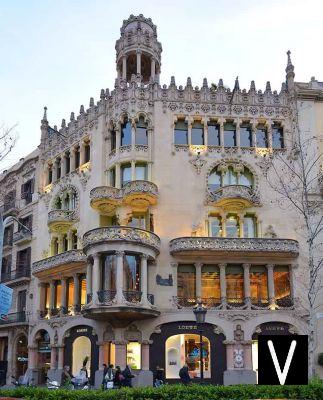 The Casa Lleó i Morera it is one of the most emblematic modernist buildings in Barcelona, the architect's work Lluís Domènech i Montaner. The house is part of the so-called manzana de la discordia, together with Casa Amatller and Casa Batlló: in the same block there are three of the most significant buildings of Catalan modernism, designed by its three most successful architects.

Domènech i Montaner will inextricably link its name to the Palau de la Musica Catalana, an authentic modernist marvel, while the other two houses on Paseo de Gràcia were built by Gaudí - who designed Casa Battló - finally Puig i Cadafalch, author of the modernist pavilions at the hospital of Sant Pau, he took care of Casa Amatller.

The building has been closed to the public since July 2016 for restoration.

The owner of the house, Francesca Morera, commissioned the architect Domènech i Montaner in 1902 to renovate the house she owned, built in 1864, at number 35 of Paseo de Gràcia. With the death of the owner in 1904, the works were continued by his son, Albert Lleó i Morera: the works were completed in 1905 and Albert gave his name to the house. The construction of Domènech i Montaner was awarded in 1906 as the best architectural project by the Municipality of Barcelona.

Albert Lleó i Morera died in 1929, and the house ceased to belong to the family in 1943. The history of the building followed that of architecture: during the rationalist period, some of the statues that adorned the building were simply thrown away, only to be recovered by the porter and sold for little money to Salvador Dalí, who took them to his house-museum in Figueres, where they still stand today. After various purchases and sales, the house was acquired by a private group, specializing in renovations.

The exterior of Casa Lleó i Morera

The building is located on an uneven ground, at the corner of the block, with the facade divided into two parts of different lengths. After the renovation of Domènech i Montaner, the building is divided into a ground floor intended for commercial activities, the first floor - noble part of the house - for the Lleó i Morera family and three apartments to rent on the upper floors. This is a typical layout of the Eixample houses. The architect managed to hide the asymmetry between the two parts of the house by building a tribune in the corner of the noble floor, completed by a small temple in the same corner on the roof to give verticality to the building, deluding the eye with a non-existent symmetry.

The distribution, size and composition of the windows is different on each floor of the building.

Most of the sculptures and stone reliefs were made by the sculptor Eusebi Arnau, one of the most important of the modernist era: other works of his are visible in Casa Amatller, in the Recinte Modernista of the Sant Pau hospital, in the Palau de la Musica Catalana and in Casa Garriga i Nogués.


Interiors of Casa Lleó i Morera 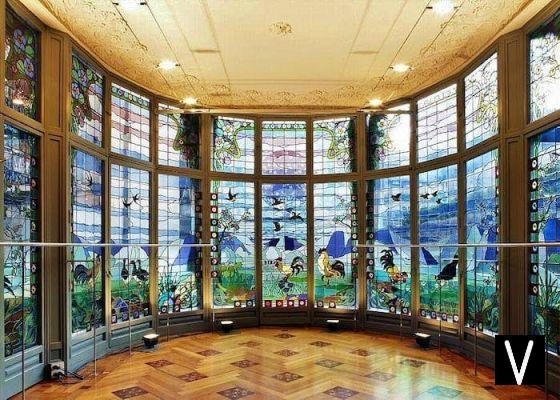 Stained glass window in the dining room
The greatest wonders of Casa Lleó i Morera are found inside: Domènech i Montaner surrounded himself with the best craftsmen of the time to create the interior decorations. The excellent state of conservation of the building allows you to admire mosaics, stained glass windows, wood and stone sculptures, marble works, decorations with scratches and ceramics, all in a modernist style.

Il vestibule is divided into two parts: the first, immediately after the entrance door, houses a piece of staircase leading to the second part, formed by a small vestibule, from which the staircase leading to the upper floors develops. The first part of the vestibule is richly decorated, to show visitors the wealth of the family. There staircase is in marble, the risers are decorated with white and yellow ceramic flowers - incidentally they are blackberry flowers, playing on the family name, Morera - on a pink and green background. All walls and ceiling are decorated with ceramic floral motifs and with scratches. The lift, decorated in wood, has been slightly adapted to adapt to current legislation, without changing its original layout.

The entrance to the main floor is gorgeous, to impress the visitor with a sculptural decoration, based on a nursery rhyme for children, in the arches and passages leading to the rest of the house. The entrance leads directly to the two large halls overlooking the street and to the central grandstand. A large part of the artistic works conceived by the architect Domènech i Montaner and created by master craftsmen are concentrated in these halls.

Il first salon, on the Paseo de Gràcia, is the main one and was intended to receive guests. Every detail has been decorated with the utmost care. To the right is another smaller salon, and between the two halls there is a triangular space that leads to the circular tribune, where there is a richly decorated fireplace. At the end of the corridor is the dining room, which ends with a large round crystal room. There dining room it is decorated with mosaic panels with porcelain reliefs. The scenes represent rural scenes, with characters inspired by family photographs, animals and natural scenes. The faces and hands of the characters are made of porcelain in relief, increasing the degree of realism of the joint. There circular glazing it is decorated with natural scenes, floral and geometric motifs, demonstrating the great level achieved in the glass art.

At present - November 2016 - Casa Lleó i Morera is closed for renovations. For more information, you can access the official website, in English, Spanish and Catalan.

How to get to Casa Lleó i Morera

Casa Lleó i Morera can only be visited on a guided tour. You can choose between an express tour, lasting 30 minutes, and the normal one hour tour. The cost of the first is 12€, the second instead costs 15 €. With the Barcelona Card and the Bus Turístic discount booklet there is a reduction of 20%.