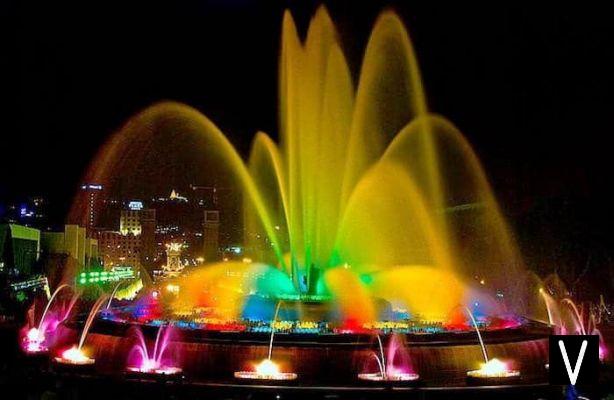 La Magic Fountain (in Castilian Fuente Mágica) is the largest fountain in Barcelona, and is the main element of a complex of plays of light and water that extends from the nearby Plaça de Espanya to the Palau Nacional, home of the MNAC.

It offers a wonderful show of water games every weekend, music and lights, unique of its kind, given the privileged position of the site, in one of the most evocative areas of the Catalan city.

The fountain show is held on Wednesday (summer only), Thursday, Friday, Saturday and Sunday of each week. It is repeated every 30 minutes, starting from the starting time, and lasts about 15 minutes.

From 1st June to 30th September

History of the Font Màgica

La Magic Fountain was built in 1929, on the occasion ofBarcelona Universal Exposition, by engineer Carles Buïgas i Sans.

Its construction took just under a year of work, with over 3000 workers employed, and had a greater number of waterfalls, smaller fountains and pools. Since its inauguration, the Font was a resounding success, and quickly became one of the icons of Barcelona.


The Font was initially to be dismantled with the end of the Exhibition, but it was decided to leave it in its place, leaving the main fountain and part of the minor ones intact, but removing part of the waterfalls and minor fountains located on the Avinguda de María Cristina.

Not having been designed to last long, the fountain began to show various problems after a few years, but the advent of the civil war first and of Francoism then delayed the first necessary restoration until 1954.

In the 80s, music was added, and just before the 1992 Barcelona Olympic Games, the fountain was provisionally restored to make sure it could function at full capacity until the games were over.

The Font was in a bad state, and it was possible to have it operate only until the start of the Paralympic Games, remaining out of function throughout 1993.
The general restoration project was not started until 1994, when the hydraulic systems were finally updated, fixing the lighting systems and minor pipes in the following years.

The restoration ended in 1998, returning the fountain to its former glory.

The main fountain is composed of three concentric lakes, whose largest, slightly elliptical in shape, has a diameter of about 60 meters, while the two inland lakes are circular and measure 12 and 35 meters.

The three lakes contain over 3 million liters of water, most of which is recycled in order to avoid waste.

The fountain has a installed power of 3.000 kW, including all the lights along the Avinguda de María Cristina, over 6.000 kW are required for its operation, used for 132 electric motors that drive the hydraulic pumps, lighting systems, water features and auxiliary systems.


The fountain's hydraulic system is able to move up to 3.000 liters of water per second, thanks to a 265 horsepower central electric pump, and a 125 horsepower auxiliary.

The area of ​​the Magic Fountain is the site chosen for the Pyromusical, the final event for the main Barcelona city festival, goods; the festival will be held on 24 September 2018 (date to be confirmed).

It is a big celebration of fireworks with music and a laser show. Furthermore, since 2013, the area has been used for Chimes party, a great show held on the occasion of the New Year.

Other musical fountains in the world

The inspiration for the Font Màgica was probably given by fontana di Křižík, built for the 1891 Universal Exhibition in Prague, and still functioning today. There are several animated fountains around the world, the two most famous being probably the Bellagio hotel fountains in Las Vegas, and the more recent Dubai Fountains.

How to get to the Font Màgica

The Magic Fountain is located in Plaça de Carles Buïgas (Metro Plaça de Espanya, metro lines 1, 3 and 8), in front of the Museu Nacional d'Art de Catalunya (MNAC), extending the auxiliary system along the avinguda de María Cristina to the Plaza de España. There are several points from which to observe the show, and photography enthusiasts are spoiled for choice for shots.