March in Barcelona, ​​between tradition and novelty

The temperatures rise (but not too much) and the days slowly get longer, making Barcelona even more captivating in the eyes of us tourists: March is certainly one of those times when it is pleasant to leave and enjoy a relaxing weekend in one of the most interesting cities of Europe.
Among the events in March in Barcelona that undoubtedly make our visit more exciting are the traditional festivals (such as Sant Medir) and important sporting events.

Traditional festivals in March in Barcelona

It may seem strange to visitors that a seemingly multicultural city like Barcelona manages to stay long anchored to its traditions, a city where each neighborhood rivals the others in offering one Most beautiful Fiesta Major, and to celebrate traditional re-enactment festivals, but it is one of the characteristics of Barcelona, ​​the community character of each neighborhood.

The feast of Sant Medir 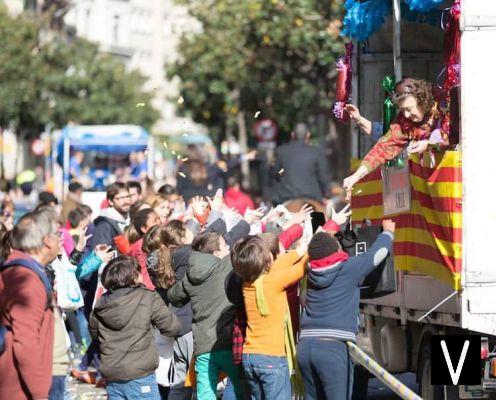 Sant Medir festival in Barcelona
March offers various festivals linked to ancient uses and customs, often dating back to centuries earlier: this is the case of Sant Medir the 3 March.

It is no coincidence that the festival is also known as the sweeter party with children - and parents - trying to get sweets, sometimes using overturned umbrellas; among the words you will hear most often on this day there will undoubtedly be here - here - to draw the attention of the participants.

The other appointment to mark on your calendar if you are in town is the Fiesta Major del Pi, also known as Feast of Sant Josep Oriol, the day of the festival is March 23, with events throughout the week: there will be the walks of the Gegants del Pi, large papier-mâché statues that walk throughout the historic center, as well as traditional shows such as the Castellers, and popular music, all near Plaça del Pi: to follow all the events you can check the twitter page of the historical reenactment group, or follow the hashtag # SJO17.

And let's not forget the St. Patrick's Day: although it is a holiday of the Irish people, Barcelona is also adopting the celebrations linked to the patron saint of Ireland in recent years and, therefore, if you are here for March 17 and you like Irish beer, get ready: in the pubs there will be themed menus and tastings are scheduled.

Sports events in March in Barcelona

During this period, Barcelona hosts several sporting events of the highest level. Let's start with Barcelona vs Paris Saint Germain, staged on Wednesday 8 March at the Camp Nou, return match of the Champions League round of XNUMX. Although the result of the first leg leaves little hope for the Catalans, tickets can be found at reduced prices, being able to enter one of the temples of football and live an unforgettable experience.

For those who love running and marathons, on 12 March Barcelona hosts the Zurich Marató de Barcelona, with a circular route that starts and ends from Avinguda de la Reina Maria Cristina near Plaza Espanya. One of the most anticipated appointments of its kind in Europe, the Barcelona Marathon it has been running since 1977 and sees the average participation of over 15.000 athletes from all over Europe and beyond. It is a very fast route, with passage in all the most iconic places of the Catalan city.


The other sporting events of this month in Barcelona will see the wheels involved: on March 26 the 105th edition of the Volta a Catalunya will end in Barcelona, ​​one of the oldest and most prestigious cycling tours in the world, third by seniority, after the Tour de France and the Giro d'Italia. A very heartfelt event, the Volta traditionally ends along the Avinguda de la Reina Maria Cristina, in a spectacular setting facing the Font Màgica, and below Montjuïc.

Barcelona is always rich in cultural events for all tastes and in March many museums start with new temporary exhibitions for the spring cycle:

add a comment of March in Barcelona: spring is coming