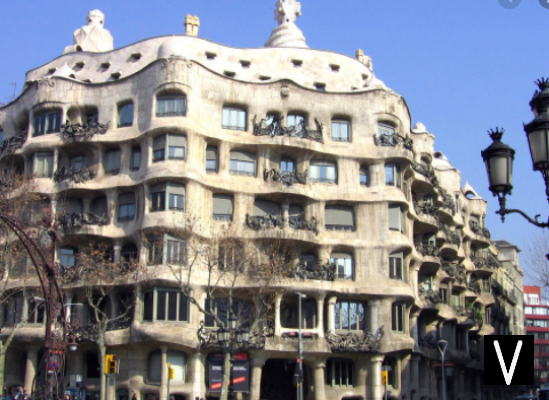 Welcome to Barcelona, ​​one of the most beautiful and cosmopolitan cities in Europe, where on the majestic Passeig de Gràcia avenue we find the most significant examples of modernist architecture.

One of these is Casa Milà, a work that we can admire today thanks to the creative and artistic genius of Antoni Gaudì, a Spanish architect, the greatest exponent of Catalan modernism, who lived between the XNUMXth and XNUMXth centuries.

The storia of La Pedrera

Casa Milà was built between 1905 and 1912 on behalf of Pere Milà, an illustrious lawyer, politician and industrialist from Barcelona who wanted to celebrate his wedding.

In 1984 Casa Milà, together with all the works of Gaudì (such as the Sagrada Familia but there are seven in all of Barcelona) was declared a World Heritage Site by UNESCO.

Everyone, even outside the borders of Barcelona, ​​knows that Casa Milà is also popularly called La Pedrera (in Spanish “the quarry”) because the façade has the appearance of a stone quarry: the surfaces in fact look like rock formations.

And not only for this, but also because, indeed, the facade is covered with limestone from El Garraf and Vilafranca del Penedès.

We are faced with a sumptuous, exciting and suggestive work for its shapes and the materials used. For the first time, reinforced concrete is used as the main structure on which tiles recomposed in mosaic according to the trencadìs technique, a decorative technique that consists in covering a surface with irregular fragments of ceramic and which finds in Gaudì one of his maximum exponents.

The imposing Casa Milà is spread over six floors. The façade has wavy horizontal planes, railings and wrought iron gates. On the balcony railings there are some very original decorative iron elements such as masks and birds.


The wrought iron doors resemble sculptures in their own right, being decorated and handcrafted one by one, although in the context of the facade they are harmonious and in any case well integrated. The roof is surmounted by chimneys from which medieval warriors appear.

A decidedly modernist style that reveals the originality of Gaudi also in the use of curvilinear and asymmetrical shapes and in the use of singular and unique decorations, mosaics and paintings. Some shapes also recall plant elements and this is not new since Gaudì loved the natural elements that entered fully into his artistic production.

Today Casa Milà, after an impressive restoration financed by Caixa Catalunya, is owned by the Fundació Catalunya and houses a museum dedicated to Gaudi and many cultural events and exhibitions. On the ground floor the auditorium is used as a hall for concerts and conferences.

On the main floor (which was then the dining room of the Milà family) temporary exhibitions are often set up, while on the fourth floor the rooms of the time (early twentieth century) are reproduced with original pieces of furniture from Casa Milà.

Going up to the attic we find a space dedicated to Gaudì: photographs, videos and models that will satisfy our curiosity about the creative talent of this artist.

The highlight of the visit inside the building is the ascent to the terrace, an original environment where you can admire many extravagant chimneys, ventilation ducts and bizarre exits from the stairs.

Once inside, don't miss the shopping too. You can buy the nice miniatures of Gaudi's furniture, art books on Catalan modernism and many themed souvenirs such as mugs, t-shirts, fans and so on.

As mentioned, La Pedrera is located in Passeig de Gràcia, at number 92.

You can get there by underground with lines 3 and 5 (Diagonal station) or with lines 2,3 and 4 (Passeig de Gràcia station).

It is still possible to reach it with the RENFE trains (Passeig de Gràcia stop) or with the FGC trains (Provença-La Pedrera station).

Casa Milà is open to the public every day from 9 to 18.

Tickets are discounted by € 3 Buy the Barcelona Card

The standard ticket costs € 22 and includes the audio guide.