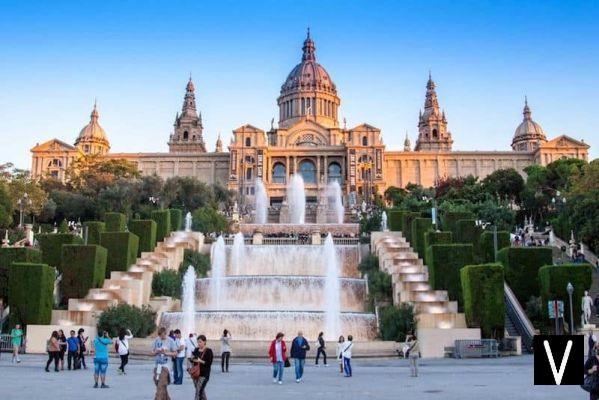 Montjuïc, together with Tibidabo, delineates the hilly promontory overlooking the city of Barcelona. A place rich in history, cultural testimonies, local customs and habits, a place that tells the authentic Barcelona, ​​the one that maintains its historical roots and hands them over to us and then after us to the new generations. It is the heart of the city, southwest of Barcelona, ​​Montjuïc, whose original name has given rise to various etymological interpretations. According to some, the name derives from the medieval Catalan language and therefore could be translated as a Hebrew mountain. According to another convincing interpretation, Montjuïc derives from the Latin Mons Jovicus or hill consecrated to Jupiter.

The splendid castle of Montjuïc is actually an ancient fortification erected for defensive purposes then transformed into a castle in 1694 by the Bourbons. It was also used as a prison, until the period of the dictatorship of General Francisco Franco and for this reason it was the scene of many executions during the Spanish Civil War. Today the castle hosts contemporary art exhibitions and events and is worth a visit if only for the fantastic viewpoint on the coast (Mirador del Migdia and Mirador de L'Alcalde). To visit the interior, the rooms and the cells of the prisons, you need to buy a ticket. Guided tours are also available to book in advance. The Castle also houses a military museum and a rich botanical garden that houses over 2.000 species.

Almost an ante litteram open museum, the Poble Espanyol conceived and designed for the 1929 Universal Exhibition based on the idea of ​​the architect Josep Puig i Cadafalch. 42 thousand square meters of surface, host these unique architectures made of 117 structures belonging to different architectural styles (bridges, buildings, squares) that speak of Spain. And it is not uncommon to come across craft shops that offer their visitors typical products, local crafts, sweets and other food and wine delicacies of the area.

A wonderful example of sports architecture, the Barcelona Olympic Stadium, designed by the architect Pere Domènech i Roura, was built in 1929 for the upcoming Olympics, but due to a series of historical vicissitudes linked to the Spanish Civil War it was really only used for the Olympics from 1992. The stadium belongs to the so-called “Olympic ring” together with the Palau Sant Jordi and the Montjuïc Diving Pool.

The Montjuïc cemetery complex was built around the second half of the XNUMXth century. Very suggestive and emotional place not only because it is dedicated to the burial of the dead, but also because it overlooks the sea. Inside you can visit the mausoleums dedicated to Joan Miró and to other Spanish personalities from the world of art and entertainment. Another place that tells the Spanish history is the Fossar de La Pedrera, a mass grave that welcomes the approximately 4000 victims of the Franco period. Admission to the cemetery is free and open.

In addition to the Olympic Stadium, sports enthusiasts cannot miss the Formula One circuit of Montjuïc. Four Grand Prix were held here but a serious accident (a car crashed into the crowd) in 1975 caused the death of four spectators and since then the circuit was definitively abandoned by the top series, but was used by other categories, such as the Motorcycle Formula TT.

It too was built on the occasion of the 1929 Exhibition and today houses the National Art Museum of Catalonia - the main museum of Barcelona, ​​created in 1990 from the merger of the collections from the Museum of Modern Art and the Museum of Art of Catalonia . From the National Palace it goes down along Avinguda de Maria Cristina to Piazza de Espanya, a spectacular one Magic Fountain, which is part of a complex of water games and lights, ponds and waterfalls. The first show was held on the occasion of the Universal Exhibition of 1929 and today it entertains visitors and tourists with its amazing and spectacular games between jets, sounds, colors and music. It houses exhibitions from the Romanesque and Gothic periods and a numismatic collection of approximately 135 pieces.

The Montjuïc cable car (buy tickets) is the best route to enjoy the best views of Barcelona. It serves to reach the castle in comfort aboard comfortable cabins. The funicular makes three stops before reaching the top: Parc Montjuïc, Mirador and Montjuïc Castle.

Do not miss the foundation dedicated to the greatest artistic exponent of the city which gathers 14.000 of his works as a permanent collection and many temporary exhibitions that demonstrate how Barcelona is a city with a great cultural ferment (click here for more information).

How to reach Montjuïc

There are several ways to get to the top of Barcelona, ​​Montjuïc: from Plaça de Catalunya, you can take bus number 55 to go up the hill. Alternatively, it is also possible to take the Parallel metro, and then the Funicular to Parc de Montjuïc.