New Year 2021 in Barcelona: all the info 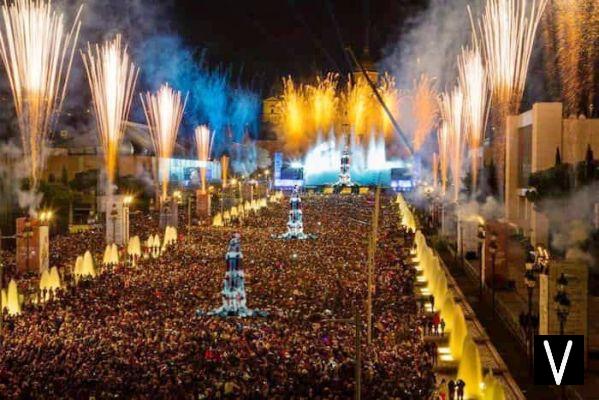 New Year, in Spanish New Years Eve and in Catalan Cap d'any, it is one of the best parties to enjoy in Barcelona: the whole city pours into the street to eat the classics 12 grapes at the stroke of midnight, and then the evening continues in discos, bars, concerts and various parties scattered in every corner of the city, helped by the fact that the metro remains open all night, certainly a great help. The downside is that you are not alone in having the same plan: forget the taxi, expect long lines to take public transport, and calculate that everything will be more expensive.

Unlike other big cities like Madrid, Barcelona didn't really have a place to meet to celebrate the last tolls. To remedy this problem, a few years ago the Municipality of Barcelona started organizing a fireworks display in Avenue of Maria Cristina, at the foot of Montjuïc. The location could not be better: with the MNAC in the background, the water games of the Font Màgica and the fireworks combine perfectly to offer an certainly exciting spectacle. The show starts at 22pm with music and percussion, and continues until 00 minutes after midnight.

After midnight, to return to the center by metro, avoid the Plaça de Espanya station and go up to the previous stations: Tarragona (green line 3) or Hostafrancs (red line 1).

If you go to a restaurant, the problem of midnight does not arise, as usually the toast is made inside the restaurant. To enter the most popular restaurants you need to book well in advance: for classy choices, read our review on the best starred restaurants in Barcelona.

How to continue the night?

All the clubs in Barcelona will be open for the occasion, so there is no problem of choice, but better organize yourself in time. If you plan to go to one of the most famous places, it is good to buy the ticket online in advance, saving something and reducing the line. For pre-sales, just take a short excursion on La Rambla in the early evening to find as many as you want.

These are the most international evenings:

Roughly speaking, most of the clubs will be full of people toasting and dancing, if anything the problem is finding a place to leave the jackets - and keep an eye on them so as not to be stolen - apart from this the situation is more or less the same everywhere, with full house between 2 and 4 in the morning. You can easily choose the neighborhood where you are staying, so it is easier to return.

Audio Video New Year 2021 in Barcelona: all the info
Barceloneta: what to do, what to see and where to eat ❯

add a comment of New Year 2021 in Barcelona: all the info