Are you in Barcelona and it's a cloudy day? Don't worry! In Barcelona you never run out of plans. That's why in ForBarcelonaLovers we have created a list of things to do on a rainy day in this city. 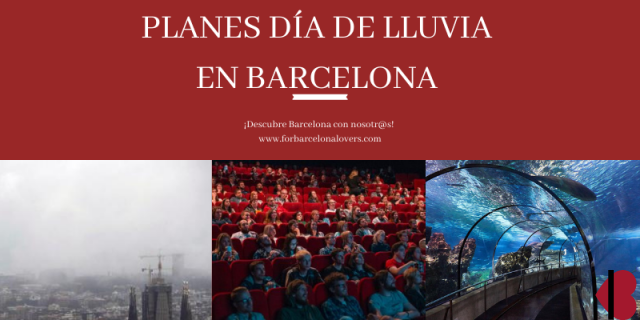 Are you in Barcelona and it's a cloudy day? Don't worry! In Barcelona you never run out of plans. That's why in ForBarcelonaLovers we have created a list of things to do on a rainy day in this city.

What to do on a rainy day in Barcelona

Although in the Catalan capital it only rains an average of 53 days a year, you have to have a plan B just in case. Whether it's taking advantage of Barcelona's many incredible museums, or exploring the city's boutiques and designer shopping malls, here are 12 fun things to do in Barcelona when it rains.

As a cosmopolitan city with a large English-speaking population, Barcelona has many cinemas showing films in English or with English subtitles. The Renoir de Floridablanca in Sant Antoni and the high-definition Verdi cinema in Gracia regularly show films in the original version, including many British and American films.

The CosmoCaixa is a museum that consists of 5 floors, although only the last one, the ground floor, stands out. In fact, the other floors consist mainly of rooms that can be visited only for school groups or if you book online days in advance.

In fact, one floor out of five may seem cheap, but I assure you that the ground floor is worth the price of admission (not even 4 € each). On this level the Amazon jungle has been recreated, complete with plants and animals typical of those areas.

Located on Montjuïc, right next to Plaça d'Espanya, the MNAC is the National Museum of Catalan Art, covering over 1,000 years of art from all over Catalonia. The collection encompasses Gothic and medieval Romanesque art, as well as more modern trends such as Catalan modernism and avant-garde currents. On the top floor of the museum, the Òleum restaurant is run by Catalan chef Fina Puigdevall, of the two-Michelin-starred Les Cols restaurant near Olot, and offers a gastronomic experience with panoramic views of the city.

Do an Escape Room

One of the latest trends in Barcelona, Escape Rooms challenge participants to find clues, answer riddles and crack codes to get out of the room. Each room has its own theme, from Gaudi's architecture to Roman-era Barcelona, and you and your teammates have an hour to work your way through and try to get the best score.

Among the things to do in Barcelona when it rains, you can't miss the Palau de la Música Catalana, right in the centre. Also because it is among the most instagrammable places in Barcelona .

To visit it, you can choose the language of your guide (between English, Spanish, French and Italian) and book online or directly at the counter of the Palau. The price is 18 € for adults, 11 € for students and senior citizens and free for children under 11 years old. The tour lasts about an hour.

If you're in the centre of Barcelona and you're caught in a sudden downpour, as we were, fear not, there's a solution. Take shelter in the covered market of Santa Caterina, not far from the Palau de la Música Catalana.

Here you can take a tour inside one of the most important markets of the city, among the various counters of fresh fish, meats, cheeses, fruits and any food you need.

Barcelona Aquarium, the largest Mediterranean aquarium in the world, houses more than 11,000 animals and some 450 different species. There is an 80-metre long tunnel that allows visitors to walk through the tanks and admire sharks, rays, octopuses and countless species of native fish.

Have a beer in Bharma


When it rains in Barcelona it's the perfect time to go to an unusual place, but an ideal shelter from the bad weather. Bharma, or the "Lost" themed pub.


Take advantage of a rainy afternoon to have a beer in this pub. Inside, you'll be immediately struck by the model of the plane that crashes on the remote island in the series, as well as the walls made up of fake rocks and plants to simulate the island itself. But if you've been following the series well, you'll notice several details inside the pub.

Another of the things to do in Barcelona when it rains is a must-do in the city: enter Casa Batlló. The prices are certainly not affordable, but I guarantee you it's money well spent.

Once inside, you will be given an audio guide in the form of a smartphone with augmented reality function. In the sense that if you point the audio guide at a point in the Casa Batlló, the screen shows you exactly what that point looked like at the time Gaudí built it.

add a comment of Rainy day plans in Barcelona