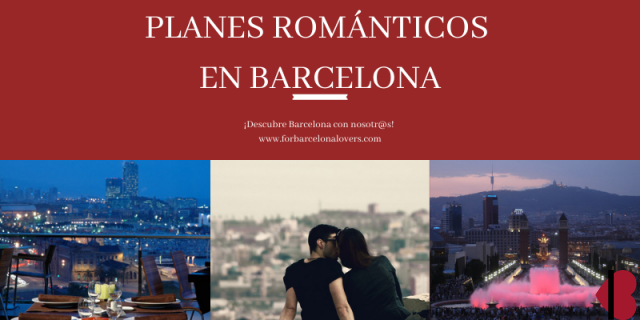 In love with Barcelona? Well, you'll be even more so after seeing this guide. In ForBarcelonaLovers we have created a list of romantic and original plans to do with your partner in Barcelona. Choose one and surprise your partner with a great plan that he or she will never forget. You'll love it!

Plans to do with your partner in BarcelonaBarcelona

is a city that goes beyond museums, monuments and visits that can be boring. If you are in this wonderful city with your partner and you want to make more original and unique plans, this is your guide. Here are some of the best romantic plans that you can do in Barcelona with your partner or with someone you want to surprise.

a couple of years ago, night access to this architectural jewel was only granted to VIPs, but since even mere mortals have this privilege, seeing it in the dark has undoubtedly become the most suggestive way to visit La Pedrera. Take a guided tour of the building, which includes special lighting and a sublime soundtrack, wash it down with a glass of cava and a videomapping show projected directly onto the rooftop chimneys and you'll have one of the most unforgettable experiences in Barcelona.

Relax on the terrace of a rooftop barIn

spring and summer (but if you're lucky with the weather, even in autumn), the real romantic Barcelona is experienced on rooftop terraces, sharing a bottle of wine or a pitcher of sangria in front of a spectacular view and away from the chaos of the city. There are few places more romantic than La Isabela at Hotel 1898 (La Rambla 109, green metro L3 stop Liceu), with direct views of the Rambla, with its 360 ° panorama and its comfortable armchairs. The quintessence of relaxation and complicity!
For a cheaper option with an equally magical view, try the Sky Bar at Hotel Central (via Laietana 30, yellow metro L4 stop Jaume I) from 8pm, or the cosy terrace at Hotel Pulizter (Carrer de Bergara 8, metro L1, L3, L6 and L7 stop Catalunya) just a stone's throw from Plaça Catalunya.
If you're not in Barcelona between March and October (when the rooftop bars are active), you might want to try a place indoors; the stylish Mirablau bar, (Plaça del Doctor Andreu, railway L7 stop Av.Tibidabo) near Tibidabo, has a splendid covered terrace from which you can admire Barcelona at your feet.

Sleep in a fairytale neighbourhoodI

a particularly romantic person, but when I walk down certain alleyways in the Born lit up at sunset or through the city's charming squares, such as Sant Agusti Vell in the Born or La Virreina in Gràcia, I want to share the feeling of intimacy and magic with someone special. If you want to experience the same spell, book a hotel in a secluded and charming area; my recommendations are Gracia or Born.
4 - Discover Parc Güell
No romantic weekend would be complete without a visit to Park Güell. Originally conceived and built as a utopian community by industrialist Eusebi Guell and the great architect Antoni Gaudí, today it's most famous for its undulating benches decorated with rich mosaics and magnificent view of the city. Whether you're visiting the monumental area or want to picnic in the wooded upper part (where you don't have to pay admission), there are few better places for a couple in the city than this fairy-tale space on the hill.

You're already sharing just about everything else, so why not add some rice?

The most popular Spanish dish is meant to be shared (the portion is always for two, so you'll have to agree on which one to choose first!), and if you add the sea view and a good bottle of wine to the gastronomic pleasure, it serves up a perfect lunch. If you have a hard time choosing paella, I recommend the fish of the day or the seafood paella. A word of warning: there are many places in Barcelona where paella is not worth it, so before you choose, check out our list of our favorite restaurants.

Watching the sunset from the bunkers (Turó de la Rovira)

From these former bunkers located near Parc Güell, built at the time of the Spanish Civil War to protect the city from air raids, you can literally enjoy a 360° view over Barcelona: from the Sagrada Familia to the hill of Montjuic, all for the price of a metro ticket! The bunkers are in fact part of the city's heritage and can be visited at any time for free, including a small but interesting exhibition of the Barcelona History Museum, which tells the function of the shelter and the history of the neighborhood that developed around it.

The place is spectacular at any time of day, but to get to the peak of romance you should arrive the night before sunset, when the sky begins to take on colour and the view becomes even more beautiful. Don't forget to bring something to drink and maybe to snack on, because you won't find anything at the top.


Have a couple's massage at Aire de Barcelona

Getting a massage, perhaps after a day of walking around the city, is always a great idea. And if you decide to try it in one of the most beautiful spas in Europe as is Aire de Barcelona (Passeig de Picasso 22, metro red line L1 stop Arc de Triomf), the experience becomes divine. Before the massage you can relax in the 6 heated pools (there is also a hammam and a salt pool), in a truly unique place, a kind of stone cave from another time. The limited number of guests means that privacy is guaranteed, as well as the quality of the treatments. To pamper yourself during your holiday and share together a moment of perfect calm. Attention: book in advance on the Aire de Barcelona website because it fills up very quickly.

Tapas dinner in a charming little square in Gracia

An oasis of authenticity and liveliness in the chaos of the centre is the Gracia neighbourhood. Here, narrow pedestrian streets and orange-scented tree-lined alleyways open onto picturesque squares that look like something out of a movie. The best thing about the neighbourhood, which helps to give the impression of being in a village, is its strong sense of identity, which has managed to keep the big chains and tourist traps at bay. Here you'll find local shops and cafés with cosy outdoor tables, for example, explore the clubs of Plaça de la Vila (with its colourful mix of children quietly playing football, street players and young people of all nationalities), Plaça de la Virreina or del Sol. Sit at one of the many tables, order some tapas to share and enjoy the simplicity and beauty of the moment.

The metro stop is Fontana (green line L3), from there enter the neighbourhood and play at getting lost!

Getting lost (together) in the Labyrinth of Horta

Maybe you only saw a labyrinth in the movies you watched as a child, or you imagined it as something fantastic and impossible to solve; but in Barcelona there is one that really can be done and finding the exit is no easy task: it's called Laberint d'Horta and is located inside the splendid garden of the same name in the district of Horta (Passeig dels Castanyers 1, metro green line L3 Stop Mundet). Here you can take a stroll and challenge yourself to get out of the labyrinth as quickly as possible, in the centre you will find a statuette of Eros.

Entrance to the park is subject to a fee (except Wednesdays and Sundays) and while you are in the area you can stop for lunch or a drink in the pretty neighbourhood of Horta, for example at the Quimet d'Horta in the blue Plaça d'Eivissa L5 stop Horta).

A kiss before a kiss

Not everybody knows it, but in Barcelona there is a big mosaic on the wall of a square in the Gothic Quarter, which represents a kiss. It is called "The world is born in every kiss" and is the work of photographer Joan Fontcuberta, who has collected hundreds of photographs to compose the image of a kiss. A stone's throw from the Cathedral, it's worth stopping by to admire it and perhaps give in to the urge to kiss! You can find it in Plaça d'Isidre Nonell (yellow metro L4 stop Jaume I).

An ice cream immersed in history

Maybe because I'm an ice cream fanatic, but grab a cone at the very good ice cream shop Gelaaati de Marco (Carrer de la Llibreteria 7, stop Jaume I on the yellow metro L4) and eat it walking to Plaça Sant Felip Neri. It's one of my favourite things to do when I'm in the centre. The romantic little square is perfect for listening to the echo of footsteps and perhaps a melancholic Spanish guitar piece while sitting on the edge of the fountain. In fact, the past of this place is quite tragic: the square was actually the scene of a bombing raid during the Spanish Civil War that is said to have killed over 40 people. The splinter marks can still be seen on the wall today - it's a good reminder of how lucky you are to be alive, in love, in Barcelona!

Think it's time to pull the oars out of your relationship? Don't do it before taking a ride on one of the rowing boats in Ciutadella Park! The £6 rental for half an hour won't break the bank, and it might be fun to watch your sweetheart struggle with her own rowing style. To look like one of those romantic comedy couples, but in a comic version!