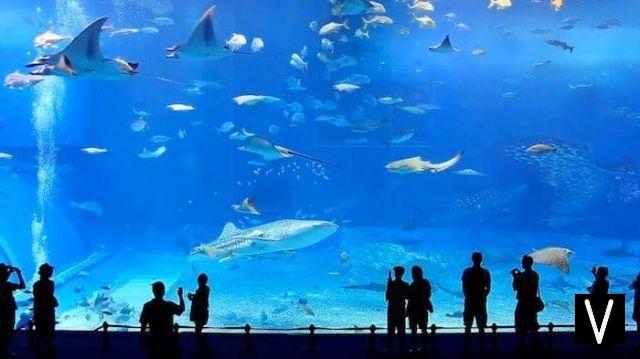 THEAquarium is the aquarium of Barcelona, ​​located in Port Vell, near the Barceloneta.

Consisting of approx 35 tubs, it contains over 11.000 animals, belonging to about 450 different species.

As for the fish fauna of the Mediterranean Sea, it is certainly the largest structure in the world.

Sharks, rays, seahorses, penguins, tropical fish and corals are just some of the inhabitants of the Aquàrium, able to offer a pleasant experience not only for children.

THEoceanarium it is the largest basin in the Aquàrium in Barcelona, ​​with a diameter of 36 meters and a depth of 5, it contains about 4 million liters of water.

Inside live very different species, such as the sunfish, manta rays and a bull shark. At the bottom there is an underwater crystal tunnel for 80 meters in length: the view is simply fascinating.

The Aquàrium offers the richest collection in the world: 14 tubs they reproduce as many different marine habitats, some typical of the whole Mediterranean, such as the Posidonia colonies, or the sandy and rocky habitats of shallow depth; in other cases, however, the basins host niche environments, such as the delta of the Ebro river, and that of the Medas islands, both protected areas of Catalonia.

Il path is designed in such a way as to be able to understand existing interactions and balances among the various ecosystems, allowing you to have a complete overview of the complex underwater world.

Thematic aquariums allow you to closely observe some inhabitants of the sea that are difficult to see, both for their extreme rarity and for their surprising ability to camouflage in their habitat: this is the case of seahorses.


Other tanks are dedicated to invertebrates from different underwater environments, both in the Mediterranean and in tropical seas, such as starfish, sea urchins, crustaceans and sea cucumbers.

A tank is dedicated to shark eggs, contained in the so-called mermaid purses. Each tank is accompanied by an interactive module that can be used to learn more about the species contained and their habits.

Thanks to the meticulous reconstruction of entire stretches of coral reef, authentic creations of nature of singular beauty, it is possible to admire 7 different tropical environments, coming from all over the world: among these you can see tanks dedicated to the Caribbean Sea, the Red Sea, up to the Great Barrier Reef of Australia.

The Barcelona aquarium owns a area dedicated especially to children, designed to introduce children to the marine world.

A series of interactive activities allow you to observe, listen, touch and discover the wonders of nature.

Within the children's area were reproduced three underwater environments of Catalonia, giving children the opportunity to learn countless information about the marine world.

The Aquàrium is located on the Dock of Spain, in Port Vell.

It can be reached on foot in less than 10 minutes from the Barceloneta metro station (line 4), or from Drassanes station (line 3): passing through the Rambla de Mar it takes about a quarter of an hour on foot.

The closing time is 19pm on weekdays in winter, and 30pm on weekends in winter. In April, May and October, the opening hours are extended until 20:00 on weekends.

In summer the Aquarium closes at 21pm in June and September, and at 00pm in July and August.

The Aquàrium is open every day of the year.

Fish meal times may vary according to the seasons, however, the shark meal time is between 12:00 and 13:00 on Tuesdays and Fridays.

Holders of the Barcelona Card are entitled to a 20% discount.