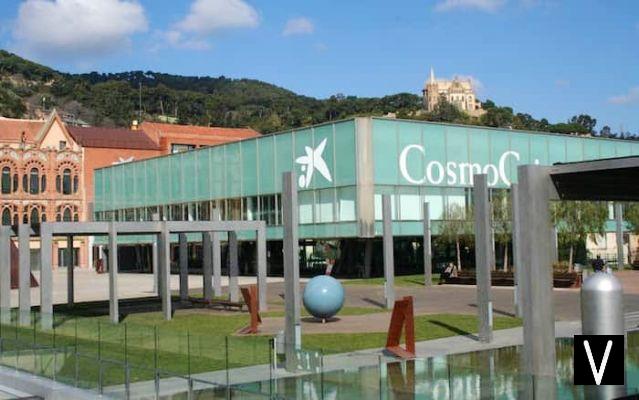 The CosmoCaixa is a very innovative science museum, in the already wide choice of Barcelona: its aim is to spread knowledge about science and nature, favoring children and adolescents. Even the greatest will not be immune from involvement: keep your schedule wide open, as you could spend a lot of time in this museum without realizing it. The CosmoCaixa is managed by a Spanish banking foundation, the Caixa precisely, which financed the renovation of the building that houses it, an ancient hospice for the blind of modernist architecture designed by the architect Domènech i Estapà in 1906, which became in 1981 home to the old Museu de la Ciencia. In 1999 it underwent profound changes, with a 4-fold expansion of the available surface, to be inaugurated in 2004 as CosmoCaixa.

CosmoCaixa is divided into different paths, some fixed, others temporary, to guarantee a certain turnover in the offer. The laboratory activities are also cyclical, with new activities proposed with some frequency. The routes have explanatory signs in Catalan, English and Spanish, however they can be followed without particular problems. Most of the side activities are prepared for Saturday and Sunday.

Tropical forests are an environmental and scientific treasure. The flooded forest allows us to enter in a way full of sensations. If you want to see how the colonies of leaf-cutting ants are organized, see how capybaras swim, or touch the trunk of a rubber tree, you only need to visit the forest, remain silent and open your eyes. The rain, the humidity, the sounds, the water, all make you think you are thousands of miles away. In the Inondato Forest it is possible to follow a path located underground along an area of ​​more than 1000 square meters, with areas flooded by the rain, which falls every 15 minutes. In this piece of the Amazon jungle in the heart of Barcelona, ​​living beings live and inhabit in harmony: caimans, ants, buoys, fish, tropical birds and plants of different colors and shapes.

The geological wall is one of the most emblematic elements of CosmoCaixa. Each of the scenarios illustrates a geological structure and is accompanied by an experiment, specially designed by the museum's technicians, which shows the geological processes at their origin. Some of these structures are formed by surface processes, such as erosion and sedimentation, and others are related to internal processes, such as volcanism or faults. Along the way you can admire 7 stone blocks weighing more than 90 tons and 24 meters long, coming from various locations around the world. Each object illustrates a fundamental geological process in the structure and formation of our planet.

This is a list of the workshops that can be done, and when to do them. Each workshop costs € 4 per child, including the adult who must accompany him. All routes are offered in Spanish and Catalan, with some sessions in English scheduled during the weekends of the summer season. Without knowing any of these languages, a child may have fewer problems with Catalan, given the similarities with the Italian language.

How does the earth move? How long does it take to go around the sun? Are the stars visible only at night? The Bombolla planetarium is a space designed to bring the little ones closer to the world of astronomy in a stimulating, friendly and at the same time rigorous way. A specialized educator invites the little participants to look at the sky with other eyes, to discover the cosmos and to travel with the imagination. With very attractive objects and materials, children will be able to develop different aspects, through the model they can be involved in different aspects, such as the succession of the phases of day and night, the phases of the moon, the seasons or eclipses, depending on the age of the child. to which the activity is directed.

The starry night is one of the most beautiful landscapes that we can contemplate from the earth, and the blacker the background of the night, the better. Thousands of stars fill the sky above our heads, making us feel part of something infinitely large, while being infinitely small. In addition to what we can see, the sky is full of surprises, peering beyond the dark darkness what would be seen? In recent decades, large telescopes and space observatories like Hubble have been spying on the black background of the night and have brought to light a fascinating, dynamic and complex universe. Hundreds, thousands of millions of astronomical objects hidden from our sight, have surprised us with an explosion of unimaginable colors, shapes and sizes.

The Clik room, for children aged 3 to 6, is an interactive space where play, observation and deduction are converted into tools for discovery. Through smells, tactile sensations, bubbles or machines, this space seeks to increase curiosity for the world of science and stimulate the experimental attitude in children. Accompanied by adults, in school groups or with families, boys and girls will experience their first approach to science: mirrors and kaleidoscopes, the environment of the forest of sensations, all to stimulate them into an engaging experience. The workshop is available every Saturday and Sunday.

Check how the human being has discovered the mysteries of flight, from ancient times to the present day, through great inventors such as Leonardo Da Vinci, the Montgolfier brothers or the Wright brothers. Experience the adventure and discover how the dream of flight, something that humanity has always cultivated, has finally managed to come true. Produced by the Copernicus Science Center in Warsaw, this immersive 3D cinema program is more than just a tale of aviation history. The combination of spectacular images, emotional music and poetic narrative make El Sueño (El Somni in Catalan) above all an authentic work of art. The activity is available from Monday to Friday at 17pm, on Saturdays and Sundays at 30pm, 12pm and 00pm, alternating sessions in Spanish and Catalan.

Toca Toca is an environmental awareness activity. Turtles, snakes, lizards, are some of the animals of the forest, the desert and the Mediterranean area. They will be able to meet and learn how to relate to them, learning to protect them. The activity is available on Saturday and Sunday, in two sessions at 12:00, 13:00, 16:00 and 18:00, costs € 4 per child and adult, and is one of the most popular with young participants.

There are numerous activities and workshops designed specifically for children, at a modest cost (from € 2 to € 4), where children can participate and interact in ad hoc paths, for age groups, under the protection of specialized personnel: although the workshops are held only in Catalan (more frequent) and English and Spanish (less frequent), these are practical experiences able to actively involve children.

How to get to CosmoCaixa

CosmoCaixa is located on Carrer Isaac Newton, 26, near Tibidabo, in the northernmost part of Barcelona. It can be reached by metro, getting off at the terminus of line 7, at the Av. Tibidabo stop. At the exit of the metro follow the road towards the hill: you will arrive in about 10 minutes. Alternatively, you can reach CosmoCaixa with a city bus, the area is served by lines V15, 22, 58, 60, 73, 75 and 196. Those who get off from Tibidabo must still take public transport, as the CosmoCaixa is almost 5 km.

In today's Barcelona, ​​CosmoCaixa is a very affordable choice, with general admission for adults only € 4. Children under 16 and holders of the Barcelona Card are entitled to free access. The general ticket is valid for all routes: the Sala della Materia, the Flooded Wood, the Geological Wall, the Weather Station, temporary and family routes. The show in the planetarium, as well as the activities of the educational workshops are paid separately. Among the things to do with the family in Barcelona, ​​CosmoCaixa is one of the most convenient, as well as being among the most engaging and interesting.

The museum has its own app, containing useful information on the fixed and temporary exhibitions scheduled: you can download both the version for Android from GooglePlay, or from iTunes for iPhone.

Audio Video The CosmoCaixa: science museum
Barcelona Card: what it is, how much it costs and when it is convenient ❯