The Egyptian museum of Barcelona 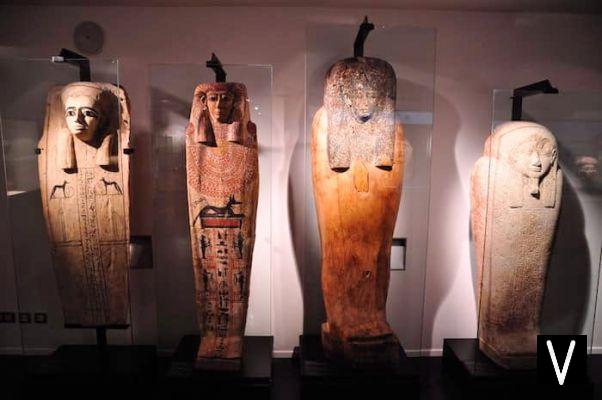 Also in Barcelona there is a Egyptian museum: let's say how things are, it's not like Turin, so you won't need a day to visit it, but it's in a great location, in Passeig de Gràcia, one block away from Casa Batlló, the collection is very interesting, it is not crowded, and to top it off if you have the Barcelona Card entry is free.

Open since 1994 thanks to the donation of a private collector, the Museum's collection has been continuously enriched over the years: it is currently divided into 10 thematic rooms, concerning both various aspects of daily life in ancient Egypt, such as daily activities or cosmetics, and aspects related to the sacred, such as funerary practices or worship in temples. One of the museum floors is devoted exclusively to temporary exhibitions, with loans from other museums in Europe and the Middle East.

Tutankhamun: story of a discovery. Few archaeological discoveries have aroused such universal uproar and interest as that of the tomb of the pharaoh Tutankhamun. The discovery of his tomb in November 1922 was a milestone in Egyptian archeology, and this temporary exhibition aims to trace its history, with photographic material from the Griffith Institute of the University of Oxford.

Osiris, God of Egypt. The being that remains perfect. The exhibition allows you to delve into the figure and myth of Osiris, one of the most fascinating among the Egyptian beliefs. Osiris represents a primordial myth of the divinity who dies and then resurrects, linked with fertility and the cycles of nature. Statues, amulets, stems and other material form part of this collection that forms the temporary exhibition, presented in a path able to explain various aspects of this deity.

The texts inside the rooms are in Spanish and Catalan, but don't worry: at the museum reception they give you a sheet with the translation into Italian. Every Saturday at 17:00 pm a guided tour in Spanish is organized, included in the normal admission price: go there even if you don't speak Spanish, as the guides are very prepared, and all in all it is quite easy to understand: your visit will be much more interesting.

How to get to the Egyptian museum

The Egyptian museum is located on Carrer València, 284, a side street of Passeig de Gràcia one block away from Casa Batlló and Casa Amatller, and not far from the Antoni Tàpies Foundation. To get there by metro, you can get off at Passeig de Gràcia stop, served by lines 2, 3 and 4. With the Bus Turístic, the closest stop is Casa Batlló - Fundació Antoni Tapiès, in common with the blue and red.

Buy tickets for the Egyptian Museum

The full ticket costs 11€, while the reduced one € 8: in both cases the ticket includes the visit to both the permanent section and the temporary exhibitions. Young people between 15 and 18 years old, students with a university card and adults over 65 are entitled to the reduced rate. Children between 6 and 14 pay € 5 instead. The visit is free for children up to and including 5 years of age, as well as for holders of the Barcelona Card. With the Bus Turístic discount booklet, the full ticket costs € 8,80, while the reduced ticket costs € 6,40. There is the possibility of buying the combined entrance with the Museum of World Cultures, in the La Ribera district, allowing entry to both museums for only 12 €, instead of 16 €.

add a comment of The Egyptian museum of Barcelona