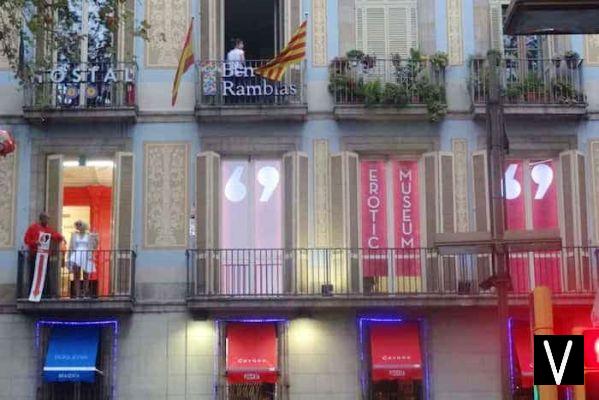 He could miss in Barcelona a Museum of Eroticism? The Museum of Erotica of Barcelona, ​​or MEB, is located in the middle of the Rambla, almost opposite the Boquería market. The Museum offers a broad historical-cultural path on the influence of eroticism on man from prehistoric times to today, with material from different eras and civilizations. Walking through the museum you can see how human sexuality has been a source of inspiration, represented both explicitly and implicitly, according to the various cultures and codes of conduct in different societies and historical moments.

Among the original materials presented there is also the private collection of King Alfonso XIII, the last king of Spain before the proclamation of the Republic and the subsequent Spanish Civil War, as well as great-grandfather of the current ruler Felipe VI: these are short films made around to 1926 in nearby Raval, characterized by a high quality of production, and can be considered among the first European pornographic videos.

The collection of the museum in general is interesting, of course, if you have been in similar structures in Amsterdam or Paris, then forget it, as the one in Barcelona is little thing compared to these, however it may be worth a visit to pass by a carefree hour. One criticism to make concerns the audio guide, not included in the ticket price, but rentable separately: definitely pretentious.

The cost for the normal ticket is 9€, for retirees and students a reduction of € 1 is available. Holders of the Bus Turístic discount booklet are entitled to a discount of € 1, while the discount is € 2 for those with the Barcelona Card. Audio guides in Italian are available for an additional € 3.