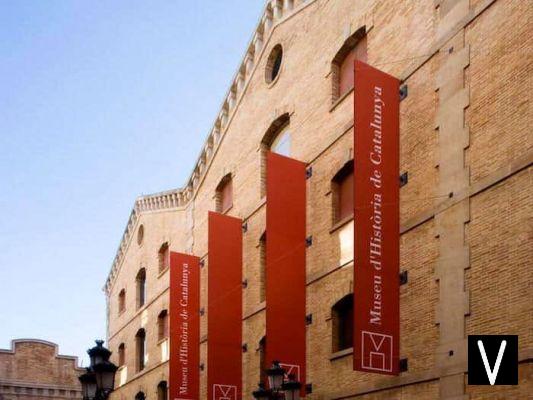 The history museum of Catalonia was founded in 1996: known locally as Museum of the History of Catalonia or MHC, the Museum collects and presents Catalan history and culture, explaining its evolution and its relations with the rest of the world. The building that houses the Museum is the old trade warehouse, the only remaining building of the old industrial port of Barcelona. Designed in 1881 based on the London and Liverpool docks as a model, it was adapted to house the Museum, the Center for Contemporary History of Catalonia and a library. In addition to the collection, certainly extensive, the museum periodically organizes temporary exhibitions on various themes, which can be accessed independently.

The Museum is divided into 8 areas, leaving from prehistoric times to the present day. The collection is very extensive, and carefully organized in order to explain both the various most important historical moments of Catalonia, and the style and conditions of life during the various eras. The explanations are in Catalan, Spanish and English.

It was Spain! Mussolini's outlook on the Spanish civil war (from November 2016 to February 2021)

Through the photographs of the private collections preserved in the Provincial Archives of Bolzano, the images preserved in the Italian military and diplomatic archives and the images published in the press of the time, the exhibition aims to involve the old and new generations in the recovery of historical memory , in the face of such a tragic event as the Spanish Civil War. Franco's armed insurrection managed to overwhelm the Republic thanks to the material and ideological help of Italy and Germany, and had repercussions on the European geopolitical chessboard in the years immediately following.

On the occasion of the 80th anniversary of the beginning of the civil war, the exhibition explores the relations between Italy and Spain, between 18 July 1936 and the withdrawal in 1939 of the Corps of Voluntary Troops (CTV), the Italian combat force sent by the Benito Mussolini's fascist Italy, as well as the Italian Legionary Aviation. A little-known page in Italian historical memory, which led over 50.000 Italian soldiers to fight under the Spanish sun.

The Templar theme has captured the interest and imagination of several generations. History and legends have collaborated to feed a myth that has often overcome the barrier of reality. This exhibition, the first of its kind in Catalonia, aims to make known who the Templars really were, in a rigorous and attractive way, immersing the visitor in the historical period of the Crusades.

The exhibition aims to show how female representation in the mass media has evolved during the second half of the twentieth century through a collection of images from different formats, such as photographs, cinema, television and advertising. The way of representing women in the mass media produces a great impact on the construction of the collective imagination on women, marking the advent of styles, fashions and aesthetic canons.

The History Museum is very large, allow at least a couple of hours to visit it. Don't forget to go up to the mirador, on the fourth floor of the building, from which you can enjoy a wonderful view over the whole old port and the Barceloneta.

How to get to the History Museum of Catalonia

The museum opens Tuesday through Saturday from 10am until 00pm, with extended opening until 19pm every Wednesday. On Sundays and public holidays the opening hours are reduced from 00:20 to 00:10. The museum closes on non-holiday Mondays, as well as on 00 and 14 January, 30 May, 1 August, 6 and 16 December.

The entrance ticket to the museum is € 4,50 for the permanent exhibition and € 4 for temporary exhibitions; the combined ticket is € 6,50. If you are under 25, over 65, or are a family of two adults plus a child, then you are entitled to the reduced rate: € 3,50 for the permanent exhibition, € 3 for exhibitions and € 4,50 € for the combined ticket. Children under the age of 8 are entitled to free access. If you have the Bus Turístic discount booklet or the Barcelona Card, you are entitled to a 30% discount on full fare tickets. The museum offers several free open-door days: the last Tuesday of each month, February 12 (Santa Eulalia), March 8 (Women's Day), April 23 (Sant Jordi), May 18 (International Day of museums), 11 September (Diada de Catalunya) and 24 September (la Mercè).

add a comment of The History Museum of Catalonia (MHC)