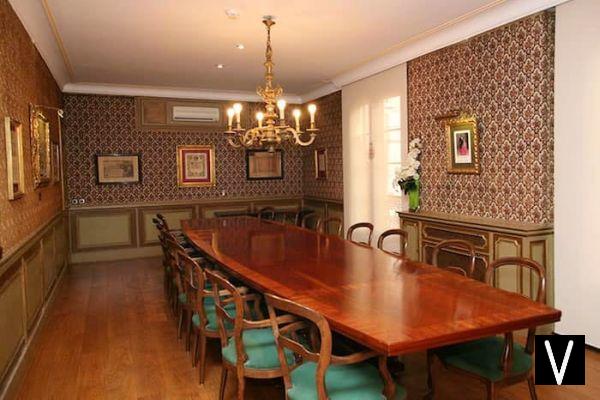 La Silk House, also known as House of the Guild of the Sailboats it is the only remaining seat of the ancient guilds that once dominated the economic life of Barcelona. Specifically, the guild for which this building was built was that of the manufacturers of silk fabrics, one of the richest in the city, testified by the sumptuousness of the palace furnishings. The building was built between 1758 and 1763 to house the headquarters of the guild, and is very easily recognized from the outside for its very elegant and original XNUMXth century sgraffiti decorations. The interiors of the House are very luxurious: the walls are covered in silk, and all the interior decorations stand out for their splendor, with various high-quality cabinet-making works and various artistic works of religious theme.

Also noteworthy is the library, with original documentation from the Corporation. However, the thing that you will probably appreciate the most when visiting the Casa de la Seda will be the explanation of the guide in Italian: our compatriot Francesca will be able to explain to you in an hour practically the entire economic history of the ciudad condal, making you delve into the role played by the corporations in the life in Barcelona, ​​the development of the port and its decline. If you like history, or just want to know more about Barcelona, ​​then a visit to the Casa de la Seda is for you.

The Casa de la Seda has only recently been open to the public, so it has not yet entered the tourist circuits of the city. If you book your visit on midweek days, you have a good chance of having the guide all to yourself.

How to get to the Casa della Seda

The Casa de la Seda is located on Carrer Sant Pere Més Alt, 1, on the corner with Vía Laietana, practically one block from the Palau de la Musica Catalana and a few hundred meters from the Cathedral. To get there, you can get off at the Urquinaona metro stop (lines 1 and 4), or at Jaume I (line 4). By Bus Turístic the closest stops are those of Barri Gòtic (red line) and Plaça de Catalunya (red and blue lines).

The Casa de la Seda can only be visited with a guided tour, lasting about 50 minutes, and is open to the public from April 31st to October 10st, from Monday to Saturday. The opening hours are from 00:13 to 00:13, with a guided tour in Italian scheduled every day at 00:XNUMX.

The ticket includes admission and a guided tour, and costs € 10 for adults, € 8 for children under 18, over 65, students, and groups of 10 people. Children under 11 can enter for free. Finally, there is a 20% discount for holders of the Barcelona Card and the Bus Turístic discount booklet.