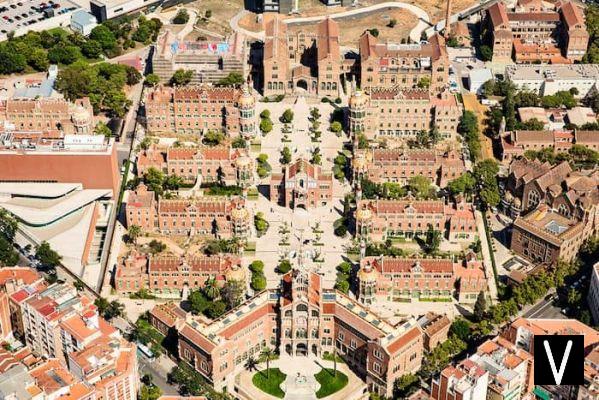 The modernist enclosure of the hospital of Santa Creu i Sant Pau is one of the most emblematic architectural works of Lluís Domènech i Montaner. It is a modernist-style hospital complex, inaugurated in 1930, consisting of a main building, 27 pavilions and a series of underground tunnels, all immersed in a large green area. The Recinto is a real miniature city, able to offer continuous surprises passing from one pavilion to another: the trencadís cladding, the windows, the stairways and the gardens, every detail has been taken care of in the smallest details to respect the canons aesthetics of the time. It is a work that represents, together with the Palau de la Musica Catalana, one of the best realized examples of modernist architecture built on a large scale. Declared World Heritage Site by UNESCO in 1997, the Recinte is currently used as a cultural center, hosting a wide range of events, exhibitions, exhibitions and concerts throughout the year.

History of the hospital

THESanta Creu i Sant Pau hospital was originally born in 1401 from the merger of 6 previous hospital structures existing at that time in Barcelona. The Santa Creu hospital, as it was called during this period, was built in the Raval district in one of the most important buildings of the Catalan Gothic, which today houses the Biblíoteca National de Catalunya. At the end of the XNUMXth century, Barcelona's population growth and medical advances made the old structure inadequate for the needs of a modern hospital. The last years of operation of the hospital in the Raval coincided with the great urban transformation of Barcelona: the construction of the Eixample.

In this context of expansion beyond the ancient city walls, another fact allowed the construction of the new hospital. In 1896, Pau Gil, a wealthy Catalan banker residing in Paris, died. In his will he arranged that his inheritance should be used for the construction of a new hospital in Barcelona. Among his provisions, Gil established how the new medical center should bring together the most advanced innovations in the medical, architectural and technological fields, placing one condition: the new structure was to be dedicated to Sant Pau. Hence the current name of the hospital, Santa Creu i Sant Pau.


Thanks to this important donation, the January 15 1902 the first stone of the new hospital center was laid, designed by the architect Lluís Domènech i Montaner. The Catalan architect was inspired by the most modern centers in Europe, conceiving a joint composed of 48 buildings, organized in separate pavilions, surrounded by gardens. New medical knowledge began to take shape in twentieth century Europe, suggesting to architecture the creation of environments that were pleasant to patients, separating the types of diseases in such a way as to improve overall hygiene conditions. The Domènech i Montaner project was only partially completed, with the construction of the large main building of 27 pavilions, and the gardens around them.

The inauguration of the new structure took place in 1930, and the hospital immediately became one of the most advanced medical centers in Spain. After more than 80 years of health activity in the Recinte Modernista, the hospital moved in 2009 to a new complex, located next to the old hospital. An ambitious rehabilitation project began in 2009, to recover and highlight the great architectural and artistic value of the hospital. Currently, part of the pavilions are used as headquarters by some organizations and institutions that deal with education, social services and sustainability.

How to get to the Modernist Recinte

The Recinte Modernista is located in the right Eixample, in Carrer de Sant Antoni Maria Claret, 167. It can be easily reached by metro (line 5, Sant Pau - Dos de Maig stop) or by bus (lines H8, 19, 20, 45, 47, 50, 51, 92, 117 and 192). With the Bus Turístic you can reach via the blue line, at the Sagrada Familia stop: from the latter you can reach the Recinte along the Avinguda de Gaudí, a lovely pedestrian street about 800 meters long, with numerous outdoor bars, and shops.

The Recinte Modernista has a summer and a winter opening. The summer one is in effect from April 1st to October 31st.

Guided tours are available in English, French and Spanish: those in English are daily at 12pm and 00pm, plus a visit at 13am during the summer. For all other times you can consult the official page. On request, by booking in advance, you can also ask for a guided tour in Italian.
The complex is closed on 25 and 26 December, in addition to 1 and 6 January.

The entrance fee for the free visit is € 10 at full rate, and € 7 for the reduced one. The guided tour costs 16 € and 11,20 € respectively. Young people between 16 and 29, as well as those over 65, are entitled to reduced admission. Children under 16 are entitled to free admission, provided they enter accompanied by an adult. Holders of the Barcelona Card and the Bus Turístic discount booklet are entitled to a 20% discount. Holders of the Ruta del Modernisme Card, on the other hand, can take advantage of a 50% discount. On the occasion of all the first Sundays of the month, and some holidays, admission is free for everyone: February 12, April 23, May 8, September 24.