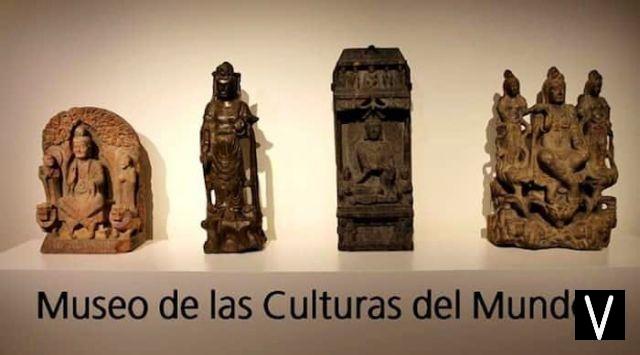 Without leaving the center of Barcelona you can immerse yourself in exotic and distant cultures within its historic rooms, being able to admire both everyday objects and real works of art: clothes, ritual artifacts in wood, ceramics and jewelry, all clearly presented with numerous reading panels in English and Spanish, videos and maps. The Museum of World Cultures is certainly suitable for families: at the entrance a brochure is offered with directions for a route designed specifically for children, where 12 objects scattered throughout the museum rooms are explained in a simple way.

Ikunde. Barcelona. A colonial metropolis (10 June 2016 - 5 February 2021): in October 1966 the discovery of an albino gorilla in the jungle of Spanish Guinea led to an unexpected outcome. The exceptional nature of the animal was a reason for international attention. In the midst of the climate of uncertainty that the Barcelona of the 70s was experiencing, the little gorilla, called Floquet de Neu, became one of the icons of the city. From this premise, the exhibition aims to explain the relationship between Barcelona and the Spanish colonies after World War II.

The museum of world cultures is housed in a building of great artistic and architectural value: Mora house. The palace is the result of a series of successive acquisitions in the 1705th century by the Codina family, one of the most important in Barcelona at the time. The palace was sold in 1714 to the Marquis of Llió, Josep Francesc de Mora i Catá, hence the current name. Severely damaged during the Bourbon siege of 1955, it has undergone numerous renovations over time, distorting the original plan. Purchased by the City of Barcelona in 2012, it underwent a long restoration before being used as the headquarters of the Design Museum until XNUMX, the year of the opening of the new center in Plaça de les Gloriès.


In the main floor of the building it is possible to admire two wooden attics with polychromatic decorations datable to the first half of the fourteenth century. It is an exceptional testimony of the interior decoration of medieval Barcelona: in addition to the coats of arms of the families owning the building, among the painted subjects there are lions, peacocks and griffins, as well as maritime and war scenes.

The museum is completely free of architectural barriers, so you can enter without problems even with a stroller.

Audio guide on your smartphone

The visit to the museum can be accompanied by an audio guide, available in English, French, Spanish and Catalan, for Android and iPhone. In the app you can select a 45 or 90 minute guided tour, or freely choose the individual works whose description you want to hear. Alternatively, you can rent an audio guide in the ticket office at a cost of € 2,5.

How to get to the Museu de Cultures del Món

The Museu de Cultures del Món is located in Carrer Montcada 5, opposite the Picasso Museum, in one of the most important monumental streets of the La Ribera district. The museum can be easily reached from the Jaume I metro station (yellow line 4): exit the station and follow Carrer Princesa, after about 200 meters the street crosses Carrer Montcada, turn right and continue for about fifty meters, the museum entrance is on the right. The closest bus lines are 120 (in Carrer Princesa), or lines 17, 19, 40 and 45 (on Via Laietana), near the metro station. You can reach the museum directly on foot from the Barri Gòtic: once you reach the Cathedral, take Via Laietana towards the sea for about 200 meters until you find Carrer Princesa on the left. By Bus Turístic, take the red line and get off at Pla de Palau station.

The Museu de Cultures del Món opens from Tuesday to Saturday from 10:00 to 19:00; on Sundays and public holidays the opening is extended until 20:00. The museum is closed on non-holiday Mondays, January 24st, May 25st, June XNUMXth and December XNUMXth.

The full entrance ticket costs € 5, while the reduced ticket costs € 3,50. If you want to enter and see only the temporary exhibitions, full and reduced tickets cost € 2,20 and € 1,50 respectively. Young people from 16 to 29 years old, over 65s and holders of the Barcelona Card are entitled to the reduction. Admission is free for children under 16; moreover, on the first Sunday of the month the museum is free for everyone, while every other Sunday you can enter for free from 15:00 to 20:00. The entrance ticket is also valid for entering the Ethnological Museum of Barcelona; for lovers of Egyptian civilization a total ticket is also offered which includes the entrance to the Egyptian Museum of Barcelona, ​​at a cost of 12 €.

The Egyptian museum of Barcelona

The Museum of Design

add a comment of The Museum of World Cultures