The National Museum of Art of Catalonia (MNAC) 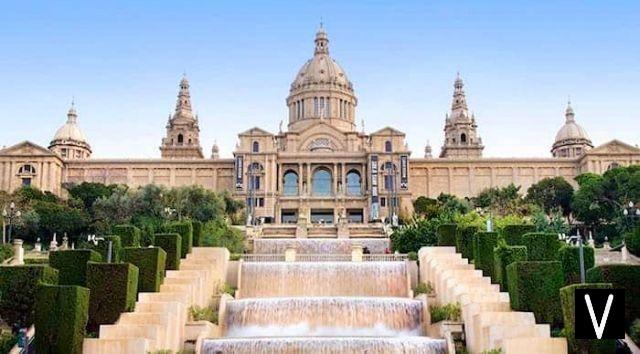 The Museu Nacional d'Art de Catalunya (MNAC) is the Barcelona's main art museum, which collects works by Catalan artists or artists related to Catalonia. The museum is located in the Palau Nacional, and was built for the 1929 Universal Exposition in a privileged position: at the foot of the Montjuïc hill, it is part of a complex that includes the Font Màgica, giving a wonderful perspective up to Plaça de Espanya , and is also within walking distance of the CaixaForum. The museum was opened in 1934, bringing together in one place all the medieval collection, until then dispersed in various places. In 1995, the new rooms of Romanesque art were inaugurated, and in 2004 those relating to modern art.

The museum contains a very extensive and varied artistic collection, ranging from the largest collection in the world of Romanesque mural painting, to the most expressive works of Catalan modernism, such as furniture by Gaudí or the illustrations by Casas. Important the Gothic art collection, as well as the collection of Renaissance and Baroque works, with the likes of Titian o Velazquez. Also noteworthy is the photographic section of the MNAC, with about 40.000 photos, ranging from the dawn of photography to journalistic photography, and gathering practically all the major Catalan exponents.

The museum collection is divided into a series of thematic itineraries, able to offer a complete overview for each single period examined. The collections of Romanesque art, and those relating to modernist architecture, are among the most important in the world, and alone are worth a visit to the MNAC.

MNAC has a rich calendar of temporary exhibitions throughout the year, so there are always at least 2-3 exhibitions inside the museum.


The exhibition, organized in conjunction with the Picasso museum in Paris, has 40 works, arranged in the permanent room of Romanesque art, which also contains the Virgen de Gòsol, the painting present in 1906 in the small village church frequented by Picasso , and which is now part of the museum's collection.

Allow at least a couple of hours to visit the museum's main collections and even half a day for a more in-depth visit that includes temporary exhibitions.


How to get to the MNAC

The MNAC is located at the foot of Montjuïc: it can be reached by metro from the Plaça de Espanya stop (lines 1 and 3): once you leave the station just follow the signs, the MNAC will immediately appear in view. By bus turístic you just need to get off at the MNAC stop on the red line.

The winter hours of the MNAC are from October to April: the museum opens from Tuesday to Saturday, from 10:00 to 18:00. On Sundays and public holidays it opens from 10:00 to 15:00.
The holiday schedule extends from May to September: the opening from Tuesday to Saturday extends until 20:00, while on Sundays and holidays it remains unchanged. The museum closes on non-holiday Mondays, as well as on January 1st, May 1st and December 25th.

Buy tickets for the MNAC

The general ticket costs 12 €, and also includes admission to temporary exhibitions. Access to the lookout terrace alone is € 2. Admission is free for children under 16 and over 65, as well as for holders of the Barcelona Card. Barcelona Card holders can also take advantage of the dedicated queues, allowing them to enter without queuing. The MNAC opens free to all every first Sunday of the month, and every Saturday starting at 15:00. Students and holders of the Ruta del modernisme Card are entitled to a 30% discount.