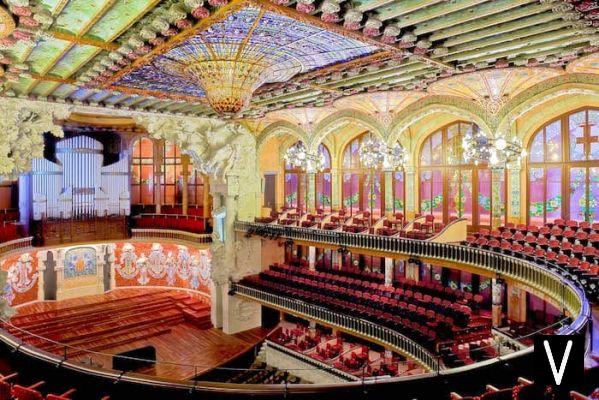 The Palau de la Musica, along with the Pedrera is considered one of the finest examples of Catalan Modernism for its brilliant architecture, and its magnificent decorations, which is why it was declared UNESCO World Heritage Site in 1997.

This appraisal redeems the years in which the palace was considered a modernist extravaganza, to the point that, during the 20s, the palace was jokingly renamed by the neighbors as the palau de quincalleria, i.e. the building of the trinkets, and several architects clamored for its demolition. Fortunately, this purpose was never completed, and the palace has remained unchanged, becoming an emblematic institution linked to the collective memory of the people of Barcelona.

The Palau de la Musica Catalana was a commission that theOrfeó Català, the company of the Catalan music choir, gave the architect Lluìs Domènech i Montaner in 1904, with the aim of building a place that could be the home of choral music in Barcelona. The first stone of the new building was placed on the day of Sant Jordi, patron saint of Catalonia, in 1905, and the works lasted for three years.

The Palau de la Musica was inaugurated in 1908, with a short concert in which music by Clavé, the father of modern Catalan choral music, and Handel were interpreted. The result was a sumptuous concert hall, arguably the best example of modernist architecture in Barcelona.

The building stands on the land where the ancient convent of San Francesco da Paola once stood. The small size of the land and the high cost of the surrounding land forced the architect Domènech i Montaner to encase the auditorium within a network of narrow alleys that limited the possibility of contemplating the building from the outside, and the adoption of peculiar solutions to ensure that the scenario had the necessary breadth for musical performances, as well as to be able to contain both the offices and the theater archives inside the building.


The church of the old convent, converted into a parish, survived until it was necessary to demolish it to undertake an expansion of the auditorium. The intervention, directed by the architect Tusquets in 2003, allowed the construction, on the church grounds, of a square that would highlight the huge Domènech stained glass window, previously hidden inside the internal patio located between the church and the Palau. On the sides of the window two towers of exposed brick were built, one of which decorated with floral motifs inspired by the original work of Domènech. In the same works, the Petit Palau, a new multipurpose room with 600 seats, was built in the basement of the square. 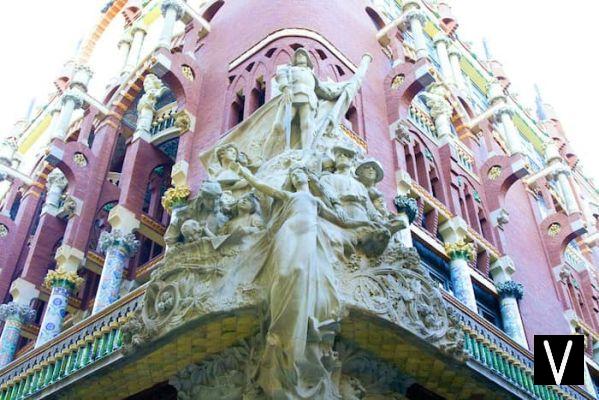 The facade designed by Domènech i Montaner is a real surprise for those who look at it for the first time: its eclectic style, very different from the sobriety of the surrounding buildings, includes large surfaces built with exposed bricks, and an extensive use of colored ceramics: in this material is used to cover the columns on the first floor, with their exuberant polychromies, and the mosaic at the top, on the pediment, is also in ceramic.

The sculptural group at the corner is the work of Miquel Blay, a huge stone prow representing an allegory of popular music. It is a work of great conceptual symbolism, with two boys and two elderly people embracing a nymph, while Sant Jordi protects them, with the Catalan flag waving in the wind. The mosaic on the facade represents "the balanguera”, From the poem by Joan Alcover, surrounded by the choristers of the Orfeó Català. Another point of interest outside the Palau are the curious ticket offices, now in disuse, located inside the columns that flank the main door.

Interior of the Palau

As soon as you enter you can continue to admire the beauty of the building: the finely decorated vestibule, the vaults covered with ceramics and the double staircase with the colored glass balustrades are just a taste of the real jewel: the concert hall.

The concert hall has a very rich set of decorations: polychrome windows, sculptures, mosaics and other decorative elements that constantly play with the perception of light and color. The hall's most famous image is probably the huge and spectacular inverted bell-shaped stained glass skylight, weighing one ton. This marvel of glassmaking represents a choir of angels surrounding the sun.

The architect's obsession with light is not limited to the skylight: the large windows around the whole room they create a kind of crystal chest, able to filter the external light through its windows, recreating the atmosphere of the Gothic cathedrals, and giving an air of sacredness to the auditorium. The stage undoubtedly contains the most spectacular sculpture in Palau: around the proscenium you can see a joint in pumice stone, designed by Domènech, but made by Didac Massana and Pau Gargallo.

On the left, you can admire a bust of Josep Anselm Clavé, one of the greatest exponents of Catalan classical music, with an allegory of May flowers above, representing popular music. To the right, a bust of Beethoven personifies universal music; Above his bust, Wagner's Valkyries ride towards Clavé, symbolizing the relationship between the new Wagnerian music with the ancient Catalan popular musical culture.

The scenario is completed with a magnificent German organ (restored in 2004 thanks to a citizen subscription) and the hemicycle, designed by Eusebi Arnau and made of trencadís, from which the 18 sculptures representing the spirits of music protrude, with the emblem of Catalonia in the center. A balcony and a colonnade of Egyptian influence help to embellish the perspective of the room, making it a real sanctuary of music, in which some of the greatest interpreters of the twentieth century have performed over the years.

Among the other spaces of the building that are interesting to visitors, we should mention the chamber music room, and the Lluis Millet room, perhaps the environment that is most faithful to the original design by Domènech i Montaner.

The Palau de la Musica is still used for concerts, so its access is limited to a few hours of the day. Guided tours are held in various languages, including Italian on weekends.

How to get to the Palau de la Musica

The Palau de la Musica Catalana is located in the La Ribera district. The closest metro stop is Urquinaona (lines 1 and 4): after exiting the metro take Carrer de los Jonqueres, to the left of the Borràs theater, continue for 150 meters until you cross Carrer Ramon Mas on the left, immediately after it once you enter, you can see the new part of the building. By bus Turístic, get off at Plaça de Catalunya stop (blue and red lines). City buses V15, V17 and 45 stop nearby.

The entrance ticket costs € 20 and includes the guided tour. Access for children up to and including 10 years is free. Holders of the Barcelona Card and the Ruta del Modernismo Card are entitled to a 20% discount.

add a comment of The Palau of Catalan Music