La Ribera is one of the historic districts of ciutat vella of Barcelona, ​​and one of the most particular of the city. It currently houses some of the city's most important attractions, such as the church of Santa María del Mar, the Palau de la Musica Catalana, and the Picasso Museum.

Once the economic center of the city, it was in the past a district of merchants, artisans, sailors and guilds, very flourishing during the golden age of Catalan trade, up to the XNUMXth century. The vestiges of this past can still be found in the names of the streets, which reflect those of the ancient trades that were practiced. Today La Ribera has become a very trendy district, with a strong vocation for design and art, and a good amount of trendy restaurants.

La Ribera in Catalan means "the“, In fact the district long ago, before the Barceloneta was joined to the mainland, had a direct outlet to the sea. Probably born after the XNUMXth century with the appearance of an inhabited center outside the medieval walls, the Ribera was initially born as a fishermen and sailors' district, slowly developing with numerous textile workshops and economic activities, until it became, between the XIII and XV century, the economic center of Barcelona.

The neighborhood has two very distinct areas: The Ribera properly so called, e he Born. The difference between the two areas is that La Ribera was inside the city walls, while the Born was outside. The term "born" can mean joust or tournament: it is assumed that in ancient times there was a square dedicated to medieval tournaments just outside the city walls, used for popular festivals such as carnival or popular processions, between the thirteenth and seventeenth centuries.


The district lost its economic importance with the construction of the new port in the XNUMXth century, which brought production activities to the Mercé district.

A part of La Ribera was razed to the ground in 1714, as a result of the Catalan defeat in the War of the Spanish Succession (1701-1713), to make room for a fortified military citadel, surrounded by an extensive esplanade that allowed for easy defense. for a total of about 28 hectares. During the XNUMXth century the military citadel was demolished, returning the land to the city of Barcelona, ​​and the esplanades were partially urbanized. Some of these spaces were used to build the Ciutadella park and the Born market, giving the neighborhood its current configuration.

Itinerary for La Ribera and the Born

You can start your journey starting from Plaça de Catalunya (widely served by metro lines 1, 3, 6 and 7), and take the Carrer de la Fontanella, until you cross the Via Laietana. This important city artery has a rather recent origin: designed at the turn of the 800s and 900s to connect the Eixample to the port, it was built in 5 years, between 1908 and 1913, demolishing over 2000 houses, including several buildings historians of the Gothic period. One of these, Casa Padellàs, was dismantled and rebuilt in Plaça Reial, becoming part of the MUHBA.

Take Via Laietana towards the sea, and continue for about 200 meters until you have Carrer Ramon Más on your left; once you have taken the Carrer you will soon find one of the most precious jewels of Catalan modernism: the Palau de la Musica Catalana. Opened in 1908, it is the most celebrated work of the architect Doménech i Montaner, and represents the true essence of Catalan modernism. Absolutely worth a visit inside, you can read more information on entrance times and the cost of tickets in this article.


After seeing the Palau, continue along the road in front of the main entrance of the Palau, Carrer Sant Pere Més Alto, to its end, to arrive at the Monastery of Sant Pere de les Puel·les in Plaça de Sant Pere. Once part of a larger Benedictine complex, the monastery was founded in the year 945, becoming an important Benedictine complex. Following the expropriations of the Spanish state, it passed into state hands and became a prison in 1835. Together with the church it was set on fire during the Spanish Civil War in 1939. The church has undergone extensive renovations over the centuries, however it can be found still many of its original elements from the Gothic and Romanesque period, surviving the numerous interventions undergone over time. The adjacent square of the same name is one of the most enchanting corners of the Ciutat Vella. 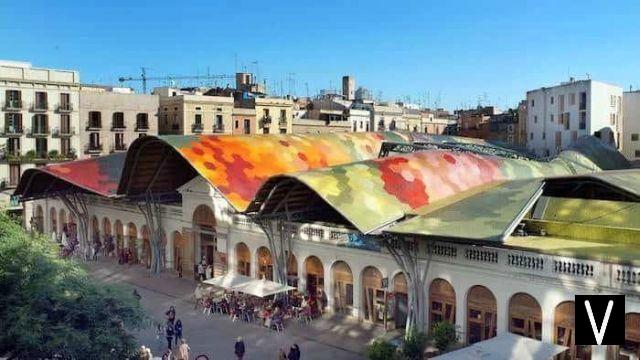 From Sant Agustí Vell to the Santa Caterina Market

Leave the square by taking the street immediately to the right of the La Caixa bank, after the intersection the street is renamed and becomes Carrer de les Basses de Sant Pere. This street leads up to the Plaça de Sant Agustí Vell. This square takes its name from the convent of the same name, razed to the ground in 1716 to build the military citadel, which was also dismantled in the XNUMXth century.

The place still retains architectural elements of the ancient convent: cross the square along the pedestrian area, on the left opens another square, Plaça de l'Academia, where you can see the remains of the facade. Enter the courtyard to see a part of the recently restored ancient cloister of the Romanesque convent. In the same building you can find the Chocolate Museum: inside you can find completely made reproductions in chocolate of the main monuments of the city, including that of the Sagrada Familia. To get to the Chocolate Museum, go out on the other side of the courtyard, in Carrer del Comerç, the museum is on the right.


Go back to Plaça de Sant Agustí Vell by taking the first left, Carrer dels Carders, named after the guilds of wool carders that operated in the street. Continue for about a hundred meters until you find Carrer d'En Giralt el Pellicer on your right, after a few meters you can reach the Santa Caterina Market.

Built between 1844 and 1848 in place of a convent, it was recently refurbished in 2004 with the addition of its characteristic wavy roof. The market opens on Mondays, Wednesdays and Saturdays until 15:30 pm, the other days until 20:00 pm, except Sundays when it is closed. Less famous than Boquería or San Antonio, this market is a great place to have a snack, inside there is a wide choice of tapas bars serving various dishes at affordable prices.

Go back on Carrer d'En Giralt el Pellicer until you cross Carrer dels Carders again. Immediately in front you will notice the Marcus Chapel. It is one of the oldest buildings in Barcelona, ​​and one of the few intact examples of Romanesque style in the city, from the XNUMXth century. His benefactor was the banker Bernat Marcús, who made important donations for the construction of a hospital, of which only the chapel remains today. The function of this hospital was to welcome visitors when the city gates were closed. After seeing the chapel, continue along the road: we are in Carrer Montcada, one of the areas with the highest concentration of museums and monuments in the city.

Carrer Montcada owes its name to one of the richest and most eminent families of Barcelona, ​​the Montcadas, who received the land in the XNUMXth century directly from the counts of Catalonia, for their support in the conquest of the city of Tortosa, up to that moment in arab hands.

The Montcadas, like other noble families and merchants, became wealthy thanks to the trade in the Mediterranean, and built their sumptuous palaces along this road. All the Gothic palaces in the area have a similar structure: built around a central patio, the main floor is accessed via a main staircase. Today most of the buildings have been converted into museums, forming an artistic center of primary importance in the city center.

Continuing to the end of Carrer Montcada you arrive at Paseo del Born: on the left you can see the church of Santa María del Mar. One of the most beautiful in Barcelona, ​​this church was built in the XNUMXth century, with the contributions and work of the faithful of the neighborhood, to which it still belongs. It is undoubtedly one of the best preserved examples of Catalan Gothic architecture. You can read the history of the church in this article, with more information on entrance times.

Leaving the church, go back to Passeig del Born, and walk it entirely up to the Born Market: designed by Josep Fontserè i Mestre in 1873, it was completed in 1876. Completely built in iron and glass, the market has undergone a profound restoration which has brought to light, in its subsoil, the remains of the ancient houses destroyed for the construction of the military citadel. Since 2013 it has hosted the Centro Cultural Mercat del Born (Born CCM): in addition to the permanent exhibition on Barcelona from the 8.000th century, with the findings of the archaeological site, the Born CCM hosts two temporary exhibitions, for which it has over XNUMX square meters of space.

The itinerary ends here. From the Born CCM you can easily reach the Parc de la Ciutadella, which extends on the other side of the cultural center, to get to the Arc de Triomf, or head towards the Barceloneta, towards the sea.

The itinerary, from Plaça de Catalunya to the Born Market, is about 2,7 km long, and can be covered in a couple of hours without taking into account any visits to museums, otherwise consider at least half a day. At the Picasso Museum there is almost always a queue at the entrance: around lunchtime there generally tends to be less. The route is completely flat and without architectural barriers: if you have rented a bike you will find racks almost everywhere. If you want to take the metro from the Born Market, the closest stations are Jaume I and Barceloneta, both on yellow line 4.

Route map: what to see in the neighborhood

Audio Video The Ribera
Miró and Barcelona: visit to the artist's places ❯