Do you want to try the best dishes in Barcelona? In ForBarcelonaLovers we help you to choose the best ones. This city has a great gastronomy that you will love. We help you with a list of dishes that you must order if you're going to eat out if you want to go out. 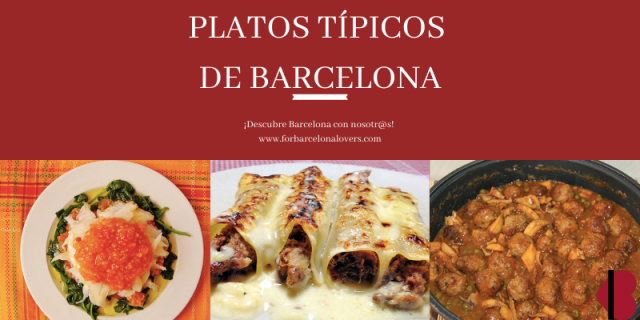 Do you want to try the best dishes in Barcelona? In ForBarcelonaLovers we help you to choose the best ones. This city has a great gastronomy that you will love. We help you with a list of dishes that you must order if you are going to eat out if you want to go out.

visiting Barcelona, one of the highlights is the food. Catalonia is not only a beautiful region, but it also boasts some of the best gourmet delicacies in Spain. The typical food in Barcelona is quite different from what you might have in mind if you have tried traditional dishes in other parts of the country. Here is a list of some of the best typical dishes in Barcelona.

Cod is very popular in Catalonia (you only have to go to a market to see that there is always a stall selling it in large quantities) and this dish is the proof; it is a fresh salad, eaten especially in summer, made with raw and chopped cod (esqueixat), to which tomatoes, onion and black olives are added, all seasoned with oil and vinegar. There is also a variant with green peppers. You can always find it in tapas bars and it is also excellent to balance, with its lightness, other heavier dishes on the menu.

Let us first say a few words about ham in general. In Spain there are mainly two breeds of pig, the Serrano and the Iberian (unofficially called pata negra). The name acorn indicates that the pig has been fed with acorns, exclusively or not (the percentage preceding the word acorn indicates the proportion), so you could easily find yourself in front of a pata negra fed only with cereals. The ideal, given the choice, is a 100% acorn-fed Iberian ham. That said, ham is an integral part of tapas menus and a holiday in Barcelona wouldn't be complete without it being added to your order (I'll even take it home for Christmas!).

Fideuá is a very popular alternative to paella among Catalans. In fact, the recipe remains essentially the same, but the rice is replaced by spaghetti (noodles), almost always accompanied by aioli sauce and lemon. There are several versions of the dish: with squid and prawns, with meat (chicken or rabbit) or mixed (the so-called mar i muntanya).

What a great Catalan invention. Meatballs cooked with cuttlefish in a rich sauce. Really tasty and original. In fact, this combination of meat and seafood is very common and we call it mar i muntanya, literally, sea and mountain. The pollastre amb llagosta, chicken and lobster (Mas de Torrent's version is the main image of this article) is definitely the king of this Catalan version of "surf & turf".

Adopted by the locals, cannelloni is considered a typical Barcelona dish. It usually has stewed meat inside the tubes instead of the Italian minced meat. That's why it's traditional to eat them on December 26th with the leftovers from Christmas dinner. In addition, the cannelloni are always covered with a bechamel sauce (little or no tomato sauce is used). There are different variations and Canelons d'ànec (duck cannelloni) are my favourite.

Made mainly with fava beans, broth and a little botifarra negra, a Catalan blood sausage. This filling and hearty bomba is usually cooked in an earthenware casserole. It is a favourite in our house in winter, when beans are in season. During the winter, I demand this meal at home, at least once a week ;-).

A great classic of Catalan cuisine, it is a very hearty dish and a good way to regain strength. The mongetes (white beans) are cooked on one side and the butifarra on the other and only at the last moment the 2 ingredients are mixed together so that the beans take on the flavour of the fat. Let's just say that if the thermometer reads 35 degrees it's not exactly the first dish you'll want to dive into, but we highly recommend you try it!

Slices of veal sliced and cooked in a rich sauce with seasonal mushrooms. Forget the Sunday roast with gravy. This is much nicer and a great way for meat lovers to try traditional food in Barcelona.

Here snails are mainly eaten in two ways: a la llauna, i.e. stuffed in little iron boxes and cooked with garlic, parsley, peppers and wine vinegar, or a la cargolada, with snails cooked directly in their shells with salt and pepper and sometimes lard. In both cases they are eaten with allioli and spicy sauce.

Bread and tomato "spread" is one of the most classic elements of Catalan cuisine; as simple as all the most delicious foods, it is made with good bread (pa de pages, the equivalent of our rustic bread, or pa de coca or pa de cristal, a thin, crusty bread with very little crumb), a little rubbed fresh garlic, tomato puree (there is a typical variety called tomàquet de penjar) and extra virgin olive oil. No tapas meal would be complete without a plate of pa amb tomaquet, the perfect accompaniment to an assortment of cheeses or Iberian ham.

Calçots are a variety of onion (similar to leek) typical of the western part of Catalonia, especially the town of Valls (Tarragona), and are always served with a special and delicious sauce. Very similar to romesco sauce, this delicacy is made with tomatoes, nyores (small dried red peppers), garlic, breadcrumbs, roasted almonds and other secret ingredients that vary according to the recipe. The calçots are first roasted over the coals wrapped in newspaper, which keeps their hearts tender, and then dipped in the sauce. It is impossible not to get dirty while eating, so many restaurants provide a bib. Be warned: the calçots season usually runs from the end of December to the end of March and the most authentic places to try them are outside Barcelona, in the countryside.

The word escalivada comes from the verb "escalivar", which means "to cook in ashes" in Catalan. Again, simplicity is the key: escalivada is a mixture of aubergines, peppers and sometimes onions, roasted over an open fire and seasoned only with olive oil, salt and pepper. There are actually many variations on the theme, and it's not uncommon to see it accompanied by toasted bread or anchovies.....

It's the star of Catalan desserts, a kind of local crème brûlée. The recipe (similar to custard) calls for milk, egg yolks, sugar, a little lemon and orange zest and cinnamon. When it's fresh it's the end of the world.

Mel i mató is very popular in Catalonia. It's a kind of cottage cheese covered with honey and decorated with nuts, in short a dessert for cheese lovers and not for those who, like me, always look for chocolate in the dessert list!

Coca, one of the most famous Catalan sweets, actually has both sweet and savoury versions, but the sweet one is probably the most popular and consumed. In fact, if you go into any bakery you will find several types, and special variants are prepared for the typical festivals (the most famous is St. John's Day, on June 24th). It is a kind of sweetened bread that can be filled with cream, decorated with candied fruit and icing sugar, shaped like a doughnut or elongated and very thin (in this case it is called coca de cristal and, in its savoury version, it is the same one that is usually used to prepare pa amb tomaquet).