What to do in Barcelona in August 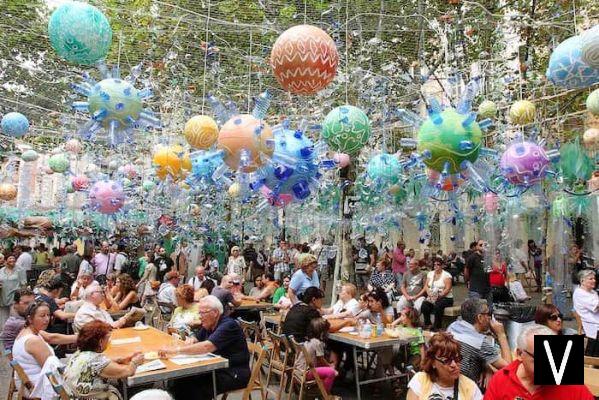 A Barcelona, to August, there is certainly no shortage of opportunities to have fun! Many of his own neighborhoods they dress up and some festival really interesting will animate the Catalan city.

If you have decided to spend yours holidays in Barcelona, that's what they are the appointments of the month of August that you absolutely cannot miss:

In August, in Barcelona, ​​one of the most anticipated parties of the year is held: it is the Festa Major de Gracia, one of the most impressive and cheerful neighborhood parties in the city.

From the 15th to the 21st of August the district of Gracia (which is located just 20 minutes from the center) and its streets will be filled with the colors of the decorations, music and lots of fun.

Each street is richly decorated by its residents, who each year hope their way will win the race more beautiful decorations. They are not missing not even concerts, markets and banquets with traditional food.

Of course, the one held in this area of ​​the city is not a grandiose party like the one in the Gracia district, but it comes very close; if you are in Barcelona during this period, therefore, it is certainly worth a visit.

Also on the occasion of this festival, the streets of the neighborhood challenge each other tender for the most beautiful decoration, and numerous activities are organized for young and old.

La feast of San Rocco is one of oldest in the city of Barcelona; think that it even dates back to second half of the '500.

From the 14 18 August, Barcelona will be animated by the celebrations for the Holy Pilgrim, which will start with the traditional parade.

The culmination of the celebrations it will take place on August 16, with the procession of San Rocco in the morning and other appointments throughout the day, which will end with a concert.

On August 17th it will be the day dedicated to dogs (the dog was the faithful companion of San Rocco during his pilgrimages); the most curious event of the day is undoubtedly the greeting to the dog of San Rocco.

On August 18, in the evening, there will be a parade with the mythology figure of Vibria, the Devils of the Gothic Quarter and, finally, the traditional correfoc. At the end of these evocative rites, there will be a folk music concert.

The Barcelona summer is enlivened not only by the biggest neighborhood parties in the city, but also by some festival absolutely unmissable.

As every year, from the 31 July to the 31 August you cannot miss the appointment with the most important festival dedicated to jazz, soul, blues e rock: the festival Mas i Mas.

As usual, during the long month of one of the biggest music festivals held in Barcelona, ​​big names in music and emerging artists will perform, to bring the sound of these fantastic musical genres to the Catalan capital.

Music in the Parks

Like every year, this August continues the Music festival in the Park, which brings classical, jazz and blues music to some of the city's major parks.

Precisely from 9 to 19 August, the festival dedicated to LGBT world, the largest in Europe, with so much music, art, sport and entertainment.

About sports! In August, in Barcelona, ​​there is no shortage of sports appointments. The first is with the Gamper Trophy, the traditional Barcelona football tournament that this year takes place on August 15th and will see FC Barcelona and the Brazilian team deol Boca Juniors take the field.

From 25 August (and until 16 September), it will be the turn of the famous cycling race "The return to Spain".

October in Barcelona: all the most important events

add a comment of What to do in Barcelona in August