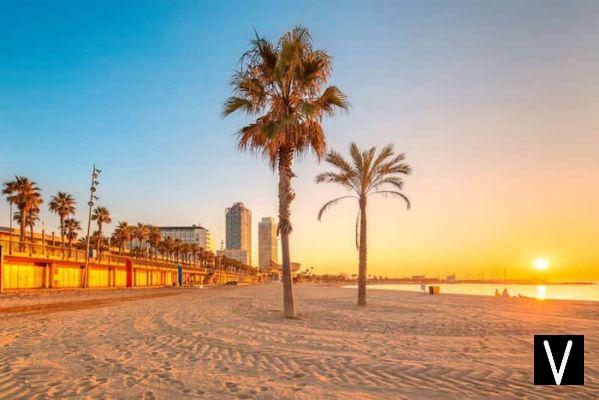 Barcelona, ​​in summer, is a city teeming with activities and events, which will make your holiday in Spain unique and unforgettable.

In the Catalan metropolis it is impossible to get bored between concerts e neighborhood parties that mark the rhythm of the days week after week.

Let's find out together the most interesting events of July in Barcelona.

In Barcelona, ​​the traditional neighborhood parties are not to be missed, either barrio parties.

Each district of the city, through its inhabitants, challenges the others in elaborating the most beautiful decorations and celebrations.

As always, the masters are there music, good food and the many handicraft booth that every evening invade the streets of the Catalan city. Two parties are scheduled in July, let's see what they are:

From the 19 to 28 of July, for 10 days, the Poble-Sec neighborhood will come alive thanks to the many activities that will be organized in the different areas of the neighborhood.

The particularities of the Festa Major del Poble Sec are the parades with the papier-mâché giants, the performances of the bagpipers and those of the castellers, who give life to real human towers.

From '11 to 14 July the Raval district celebrates its biggest festival, the Festa Major del Raval. These celebrations are done in honor of the Virgen del Carmen, patroness of the main parish of the district.

During these 4 days the streets of Raval, the most cosmopolitan district of the city, will be full, not only of people, but also and above all of activities and events.

Throughout the summer, in Barcelona you can take advantage of various events to participate in the rich cultural life of the Catalan capital. These are the events scheduled for July:

Wine of the week at the Mirador de Colón

From 1 to 28 July you will live a unique experience. Vino de la semana en el Mirador de Colón is a real journey through the flavors of the territory in the center of the Catalan city.

Every week in July, at the Mirador de Colón, they offer a different wine, with tastings and guided tours.

To reach the place of the event you have to get off at Drassanes stop of the L3 underground line.

Since 10 to 14 July in Igualada, near Barcelona, ​​the beautiful European Balloon Festival will take place this year, the European festival of hot air balloons, a competition but also an all-in-one festival that will bring over 50 hot air balloons to the sky of Catalonia. On the last day, for the grand finale, there will be a fireworks show.

To reach the venue, the Parc Central de Igualada, you must use the railway line R6 and get off at the station Igualada. THE'admission is free.

In the summer, great music never fails in Barcelona. The Catalan city becomes hot in this period and will be animated throughout the month of July by numerous musical events, able to satisfy any type of needs. Here are the most interesting events:

Since 4 to 7 July Can Zam Park the Rock Fest Barcelona will take place.

For 4 days the Catalan capital will host one of the most anticipated musical events of the summer.

Among the artists who will take the stage there will also be groups like the Dikn Diamond, Europe e Arch Enemy.

To reach the place of the event you have to get off at Santa Coloma stop of line L1 or to Can Zam station of the L9N metro line.
Official site.

Since 18 to 20 July do not miss the appointment with the Sonar Electronic Music Festival, which in recent years has established itself as one of the best known music festivals in Europe.

The event will take place in two locations: Montjuic Fair (Sónar by Day) e Fira Gran Via (Sónar by Night).

Single entry Sónar by Day (does not give access to the Teatre Grec concert): € 58

Single entry Sónar by Night (does not give access to the Teatre Grec concert): € 79

Two-day Sónar by Night admission (does not give access to the Teatre Grec concert): € 135

Three-day admission Sónar by Day + Sónar by Night (does not give access to the Teatre Grec concert): € 195

Two-day VIP entry Sónar by Night (does not give access to the Teatre Grec concert): € 195

Three-day VIP entrance Sónar by Day + Sónar by Night (does not give access to the Teatre Grec concert): € 315

To reach Fira de Montjuic you have to get off at the Espanya stop on the L1 and L3 metro lines.

To reach Fira Gran Via you have to get off at the Fira stop of the L9 underground line.

From the 3 to 6 July Barcelona will host the Cruïlla Festival, the best Catalan music festival among those dedicated to indie and alternative music.

The gates always open at 18 pm. On Wednesday 3 July the concerts end at 23 pm, Thursday 4 July at 1 am, while in the last two days the music will go on until 5 in the morning.

To reach the place of the event you have to get off at Forum stop of the L4 underground line.

During the live concert at Palau de la Música, the Royal Film Concert Orchestra, under the direction of Fernando Furones, will play the best soundtracks that have made the history of cinema.

To reach the place of the event you have to get off at the Urquinaona stop of the L1 / L4 underground lines.

The Four Seasons of Vivaldi

On July 10,the Palau de la Música will host Las Cuatro estaciones de Vivaldi, the 4 seasons of Vivaldi, one of the masterpieces in the history of classical music, which will be played byBaroque Orchestra of Barcelona.

To reach the place of the event you have to get off at Urquinaona stop of the underground lines L1 / L4.

Saturday July 13 the capital of Catalonia will host the sixth edition of the Barcelona Beach Festival, which will once again bring the best electronic music of the moment to the beach of the Parc de la Pau in Barcelona.

Year after year this festival is proving to be the greatest show of dance music of Spain, and manages to bring together some of the best DJs national and international: this year there will also be David Guetta.

The show will start at 15pm.

To reach the place of the event you have to get off at Maresme-Forum stop of the L4 underground line.

As for sports, the month of July in Barcelona will offer several interesting events. Here are the two most important!

From the 4 to 14 July the city of Barcelona will host the World Roller Games, the largest event in the world dedicated to roller sports, which will bring some of the best athletes in the world of various disciplines to the Catalan city.

9 of the 13 venues hosting the event are located in Barcelona. The epicenter of the event is the Montjuïc sports area.

The events of the World Roller Games in Barcelona will take place from morning to evening every day of the event. The price of tickets varies according to the disciplines.

From the 10 to 13 July the coasts of the Catalan capital will once again witness the majesty of the classic and vintage sailboats that this year will participate in the XII Puig Vela Clàssica in Barcelona.

The operational center of the event will be on Real Club Nautico de Barcelona, at the Moll d'Espanya.

Le subway stops closest are that of Drassanes, on line L3, and that of Barceloneta, on line L4.

Audio Video What to do in Barcelona in July
Casa Amatller, Barcelona ❯

October in Barcelona: all the most important events

add a comment of What to do in Barcelona in July