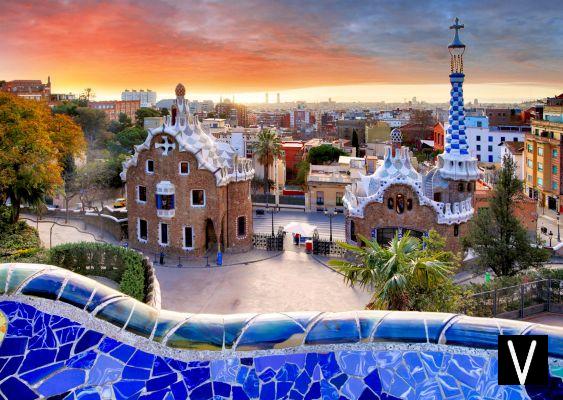 June is the perfect month to visit Barcelona: summer has practically arrived, the days are beautiful and long and, between one dive and another, there are many interesting events to participate in.

Let's see together what are the appointments of the month of June in Barcelona that you absolutely cannot miss.

As usual, Barcelona gives us some really curious and interesting traditional events.

One of the most curious, held from 20 to 23 June, on the weekend of Corpus Christi, it is for sure "The egg dances". In many parts of the city, especially near the religious places, on the occasion of this Christian holiday it is possible to admire eggs that "dance" above the jets of water; hence the name of the ou com balla. If you are in Barcelona during this period, therefore, keep your eyes peeled and enjoy the show!

Do you want to relive the atmosphere of the Catalan modernist era? When did Antoni Gaudì work on the grandiose Sagrada Familia project? Then you can't miss the traditional Modernist Fair which, like every year, is held at the beginning of June in the streets of Girona (from 31 May to 2 June 2019).

Walking through the streets of the neighborhood, you will find stalls with handicraft products, you can attend concerts, traditional dances and theatrical performances and you will immerse yourself in the magical atmosphere of the early decades of the twentieth century.

As in many other parts of Europe, including Italy, the St. John's night, that is, between 23 and 24 June, is celebrated with family gatherings and traditional bonfires. In Barcelona, ​​in particular, the traditional Canigó Flamé arrives in Plaça de Sant Jaume, where representatives of the neighborhoods are gathered who are waiting to bring the flame to their area of ​​the city to light the bonfire that will illuminate the city night.

In June, many events dedicated to the music, all equally unmissable.

The month kicks off with a long-awaited return: it is Rock & Grill Barrel (from 31 May to 2 June 2019 at Poble Espanyol), the festival that combines a passion for music with that for barbecues.

It continues with the Jardins de Pedralbes Festival, which will start on 5 June and will end on 15 July 2019 and, as usual, will be held in the gardens of the old residence of the Spanish royalty, the Palau Reial.

Among the artists present at the festival we remember Mariah Carey and the Beach Boys.

Among the concerts to be held in Barcelona this month, I would like to point out that of E (7 June).

From 6 to 10 June La Rambla, one of the most famous streets in Barcelona, ​​returns to be filled with the flavors and aromas of Tast to the Rambla.

In addition to the classic tapas, the best restaurants of Barcelona will all be here to present traditional dishes and their specialties to those who decide to participate in the event.

The month of June, in Barcelona, ​​also gives us some appointments with culture. One of them is poetry slam (June 16), a real rhyming contest.

From 25 to 29 June it will return instead BccN, the Barcelona Creative Commons Film Festival, a free film and cultural festival, which aims to bring the film industry and producers closer to the public. This year it has reached its tenth edition.

If you are passionate about motorcycling, you cannot miss the highly anticipated appointment with the Moto GP Catalonian Grand Prix, which will take place at the Circuit de Cataluña from 14 to 16 June.

On 28 and 29 June the largest event in Europe dedicated to the fight for homosexual rights returns. Saturday 29 June will be held the ParadeBook now

Save on public transport and the cost of attractions.
Buy now

Free itinerary with the main things to see.
Download the pdf now

Audio Video What to do in Barcelona in June
Gràcia: discovering modernism ❯

add a comment of What to do in Barcelona in June