What to eat in Barcelona: typical dishes

Catalonia is a region with a great culinary tradition, and its capital, Barcelona, is an excellent example: the first Spanish cookery book was printed in the Ciutat Condal in 1477.

In typical Catalan cuisine, ingredients from both the mountainous interior and sea products from the coast are used, dishes precisely called di sea ​​and mountain, in which these ingredients are expertly mixed to obtain very tasty dishes.

Among the various Spanish regional cuisines, Catalan is the one with the greatest foreign influences, especially from neighboring France and Italy, so it is easy to find many similarities with local cuisine: the basis for many dishes is sofregit, that is the fried onion, celery and carrots.

The list is not complete, but it may be enough to recognize the most frequent dishes, and to understand what you are ordering. 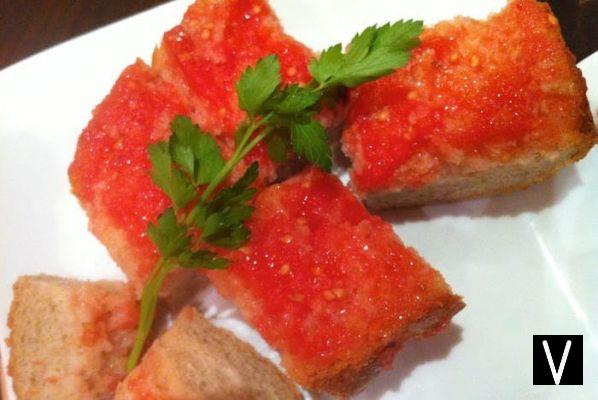 The most representative dish of Catalan cuisine is the very simple bread and tomato. Prepared with pà de pagès, a typical homemade bread, it is a bruschetta with oil and chopped tomato, to which the Catalans sometimes add chopped jamón.

It is one of the typical dishes of Catalonia not to be missed if you go to Barcelona from February to April.

It is a kind of late spring onion, cooked over a high flame and traditionally accompanied by romesco sauce, made with tomato, garlic, almonds and peppers. There are outdoor bars that organize calçotadas, such as the Caseta del Migdia.

It is a very typical dish of all Catalan countries, basically it is agrilled eggplant, pepper, onion and tomato salad.

When you add chopped cod, it is called espencat. In both cases it is served directly on slices of bread. 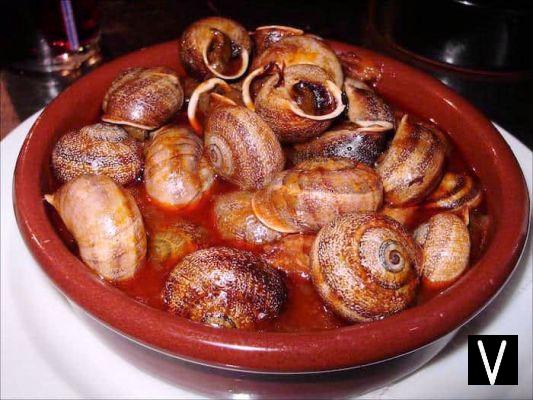 Le snails they are a great passion of the Catalans, so it will be very easy to find them in restaurants, or if you are lucky, served as tapas.

One of the simplest - and most frequent - recipes is in the can: snails are simply roasted inside a pan (precisely the llauna), and then served accompanied by sometimes very elaborate sauces, hence the typical Catalan phrase "costa màs la salsa que els cargols" , the snail sauce costs more.

The Genoese and the people of Barcelona discuss not only the birthplace of Christopher Columbus, but also the paternity of the focaccia.

For this last dish, given the ancient commercial links between the two cities, it is difficult to say who is right on the matter, but it is certain that Catalan coca looks a lot like Genoese flat bread, and in some places in Catalonia it is called fogassa or fugassa, as in Genoese, and in both cases it is a very traditional dish.

Prepared in a thousand different ways, there are specific recipes for some holidays: the Saint John's cake, a sweet coke with candied fruit, is traditionally consumed in the revetlla de Sant Joan, or the night of San Giovanni, from 23 to 24 June.

Another of the typical foods of Barcelona is cod, a memory of the ancient commercial relations of the Catalan city with the ports of northern Europe.

In detail, it is raw cod, delicately chopped with your fingers (the verb esqueixar means precisely to chop), accompanied with tomato, onion, peppers, olives and a drizzle of olive oil. All a taste to try, if you like fish cuisine!


Head and Leg with gut 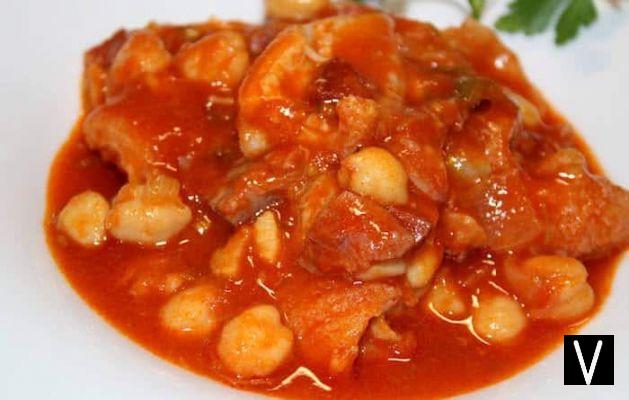 Head and leg with gut

La trippa alla catalana. The words cap i pota mean “head and foot”, in fact for the preparation of this tasty dish the head and leg of the veal are used, accompanied by a sauce based on chickpeas and salami.

In Barcelona it was once a typical Sunday dish, if you are lucky you can find it as a tapa in some bodega, especially on Sundays. 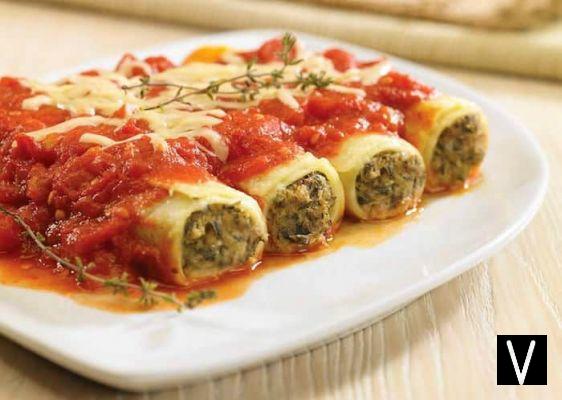 Curiously, among the typical dishes of Catalan cuisine there are also cannelloni, introduced by Italian cooks at the service of wealthy middle-class families towards the end of the XNUMXth century.

Unlike Italian cannelloni, the filling in the Catalan version is not made with a ragù, but with pieces of roast meat. The explanation for this difference is that traditionally in Catalan homes the canelons are cooked on Boxing Day, to recycle the roast of the Christmas lunch. 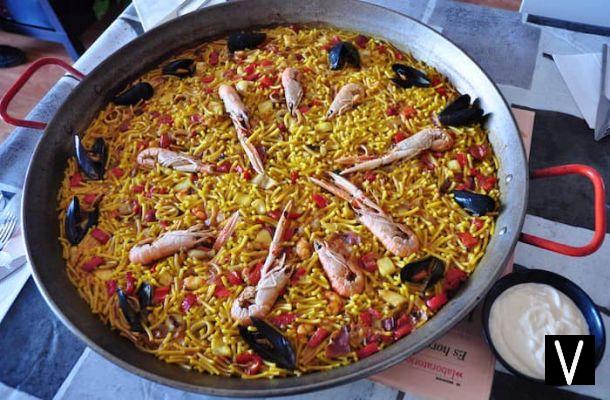 The name of this dish derives from the main ingredient used, the fideos, basically chopped spaghetti.

Tradition has it that a fisherman invented this dish while he was at sea: wanting to prepare a paella and not having rice available, he used fideos instead, obtaining the result that can be seen today in restaurants all over Barcelona. .

In fact the flavor recalls that of seafood paella, although there are some differences in the preparation.

Authentic Catalan dish, sometimes it is served accompanied by alioli sauce, or garlic mayonnaise: don't be scared by the calories and try it with its sauce, it's very good. 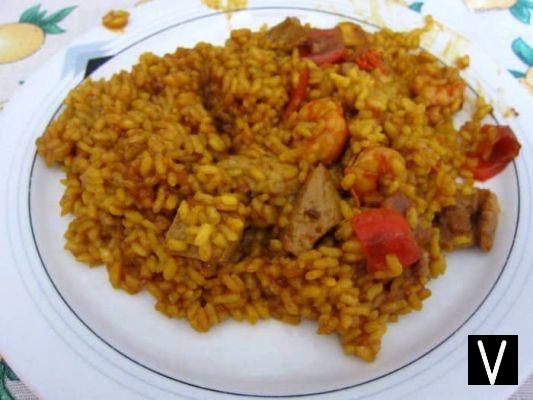 A very present dish in the menus of the various Catalan cuisine restaurants, the arroz a banda is a poor version of paella: in essence it is a risotto, flavored with fish broth and often served accompanied by alioli.

Sometimes it is accompanied by seafood, and is said of the senyoret, that is, of the young gentleman, as the various ingredients, such as mussels and prawns, are carefully cleaned before being cooked.

The fricandó is a boiled veal, accompanied by a very thick sauce with mushrooms, precisely the bolets; if prepared well, the meat should be very soft and melt in your mouth. 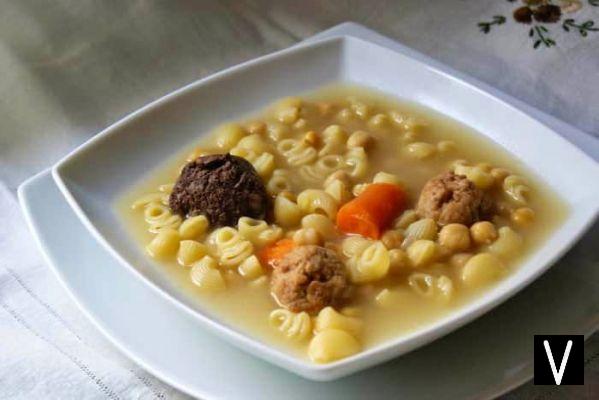 It is a typical soup of Catalan gastronomy.

It is mainly characterized by use the pilot in the boiled meat, that is a large meatball, then divided into slices and distributed among the various diners, prepared with minced meat, grated bread, garlic and parsley, baked in the oven before being boiled in broth.

The pilot is the only constant in the preparation of the escudella, as there are different variations depending on the season and the cook who prepares it.

One of his version is a typical Christmas dish: it is prepared with a particular pasta called galets, that is large conchiglioni, filled one by one with pieces of pilot. 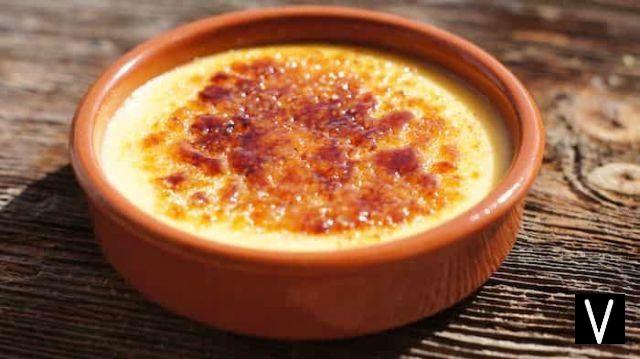 It is certainly the Catalan dish known more abroad, basically consists of a pastry cream coated with caramelized sugar, very tasty for its crunchy contrast.

Currently it is a constant dessert on the menu of every restaurant in Barcelona, ​​but traditionally it was a dessert for the holidays: the typical day on which it was served was March 19, the feast of St. Joseph.

Barcelona is full of restaurants serving Catalan cuisine, although Barcelona families generally prefer to go out of town to enjoy traditional dishes, or head directly to the various country festivals.

Here we have listed the most famous historical restaurants in Barcelona, where you can try typical cuisine in its classic form, playing it safe.

Especially recommended are the Pitarra e Can Cullerets, where typical Catalan dishes are always included in the menu del día, an excellent idea to try the typical dishes on a budget.

If you like fish instead, then read this other article, the result of a methodical fieldwork to find the places where eat well without getting plucked.

If, on the other hand, you want to try a more rustic experience, blackening your hands in a calçotada or tasting the Catalan cargols, more than a restaurant you have to try going to a xiringuito, that is an outdoor bar in the city: two of these, the Noon House, Bar.Water, have been reviewed in our guide to outdoor bars and restaurants.

In these kiosks there is a good chance to try calçots and cargols when they are in season. In the same article you will find the review on Can Deu, another restaurant with an outdoor terrace where local cuisine is served at very attractive prices.

add a comment of What to eat in Barcelona: typical dishes