5 starred restaurants not to be missed in Barcelona 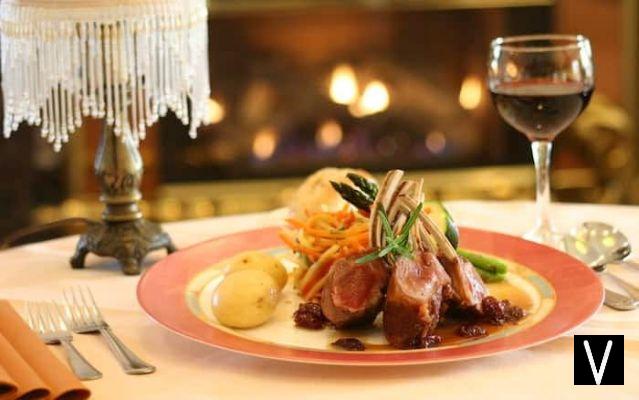 Are you going to Barcelona and are you looking for a "starred" restaurant? Do you like to indulge yourself on holiday and try the best cuisines? Discover the most renowned and famous restaurants in Barcelona.

Barcelona is the culinary capital of Spain, and the 2016 Michelin Guide clearly captures the situation: as many as 23 restaurants have been mentioned in the famous French guide, 19 of these with 1 star and 4 with 2 stars, certainly an important recognition for the Catalan city.

The influences of the molecular cuisine of Ferran Adrià, the renowned chef of ElBulli, are now well established in Catalan haute cuisine, however the new generation of chefs in Barcelona has been able to take the best of this creative experience: no more scenographic ideas with the aim of surprising the diner, but techniques acquired with the aim of putting flavor first: from this point of view the culinary scene of Barcelona is more balanced than it may appear at first glance.

The release of the Michelin guide, with its star award it has become in recent years a very important moment in the upscale gastronomy sector, and receiving one more - or less - star can make a huge difference for a restaurant.

Although Michelin has been criticized in the past for the opaque criteria with which it awards its stars, favoring restaurants with French cuisine, the Guida transalpina still remains one of the main reference points for gourmets from all over the world, and a meal in a starred restaurant is always an experience to remember.

We have tried to offer a comprehensive overview of Barcelona's haute cuisine by choosing, from among the many possibilities, 5 different chefs: if you want to relive the ElBulli experience, the best choice is certainly Tickets, by Albert Adrià; Dos Cielos by the Torres brothers offers the most Catalan menu, and its spectacular location makes it an ideal choice for a special occasion as a couple. heaven by Romain Fornell is the classic prototype of the Michelin-starred restaurant: elegant, with great attention to detail and able to express a cuisine with a clear French matrix, perfectly adapted to the Catalan specificity.


If you want to try the right compromise between avant-garde and tradition, do not hesitate to choose Alchemy, by Jordi Vilà, probably the best candidate to acquire a second star in the near future. The last of our choices, aBaC by Jordi Cruz, is already a consolidated reality in quality cuisine: the double Michelin star is widely deserved, and given the great skills expressed and the young age of the chef, there is plenty of time to earn the third star. 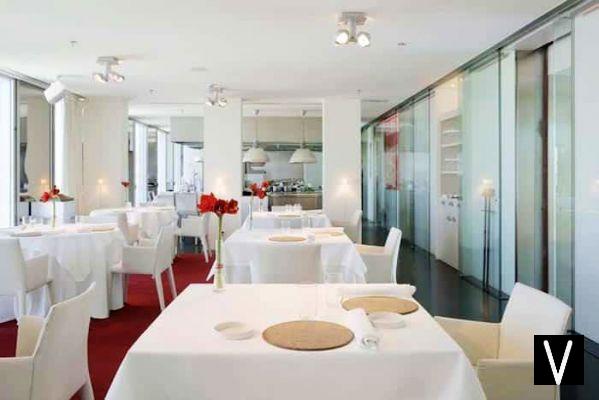 The name of this restaurant could not be better: located on the 24th floor of the Meliá Sky hotel, it promises a spectacular view over the whole city. The entrance to the open kitchen is another highlight of Dos Cielos, run by the Torres brothers, two well-known chefs in Spain. With a Mediterranean-style cuisine, where a lot of space is dedicated to ingredients typical of Catalonia.

Dos Cielos offers an interesting tasting menu, changed on a seasonal basis, at € 110, including 8 courses plus desserts, if you go to the menu instead, calculate € 150 per person, in line with the type of these restaurants. The wine list is well stocked, however it is decidedly expensive, even for not particularly special labels. Probably the best option for a couple's dinner, given the excellent cuisine and the spectacular view. To stay directly in theMeliá Sky hotel you can choose from the following offers.

Dos Cielos is located at Carrer de Pere IV, 272-286, in Poblenou (metro Poblenou, line 4). It opens every day from 13:30 pm to 16:00 pm, and from 20:30 pm to 22:30 pm. To dine on the weekend book at least a month in advance, if you want to try Dos Cielos during the week, if you are lucky you can find a place even a few days earlier. If you want to read the reviews of this restaurant you can follow this link. 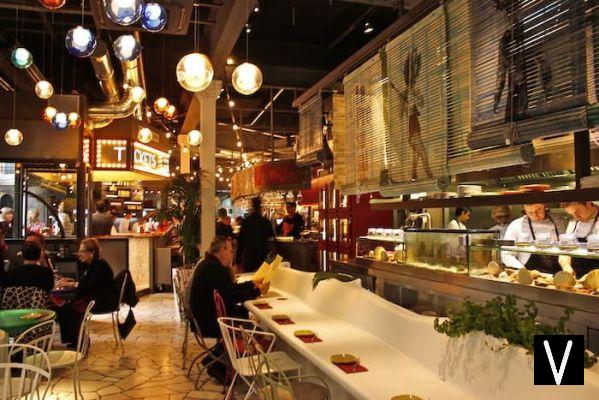 Handled by Albert Adriá, brother of the more famous Ferran, Tickets seems to be perfectly in line with the family brand: refined but apparently environment casual, phenomenal presentation of dishes, and excellent attention to detail are the business card of this place.

The dishes are presented in the form of tapas, combining tradition and modernity in the best possible way, without ever losing sight of the product, expect high quality experiments, in line with the tradition of the Ferran house.

For the bill, assuming a dinner for two with an average expensive bottle of wine, you could get away with less than € 100 in total, certainly a competitive price for this category of restaurants. Tickets' only real drawback is the waiting list, in the order of months.

Tickets is located on Avinguda Paral·lel, at number 164: the closest metro stop is Poble Sec (line 3). Reservations are made only on the restaurant's website, if you are interested in reading some reviews, you can find them on this page. 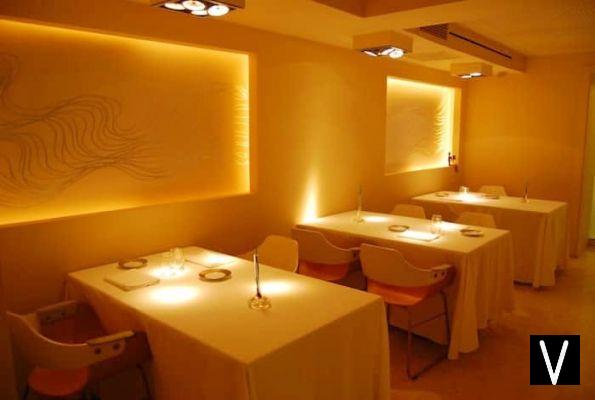 Jordi Vilà, the head chef of Alkimia, is one of the most interesting chefs on the Spanish scene: with a reserved and not at all mediatic character, his is a cuisine with character, never predictable, able to always put taste first, certainly to try.

Proof of its success are the waiting times to find a place at Alkimia, of several weeks. It is difficult to classify the cuisine of Alkimia, certainly much emphasis is given to typical ingredients of Catalonia.

Alkimia is located in Ronda San Antoni, 41, in the Raval. It can be reached by metro from the Universitat stop, about 200 meters away, or directly from Plaça de Catalunya, walking for half a kilometer.

It opens from Monday to Friday, from 13pm to 30pm for lunch and from 15pm to 30pm for dinner Closed on Saturday and Sunday. To read the comments you can go here, instead if you want to book a table you can do it on the restaurant's website. 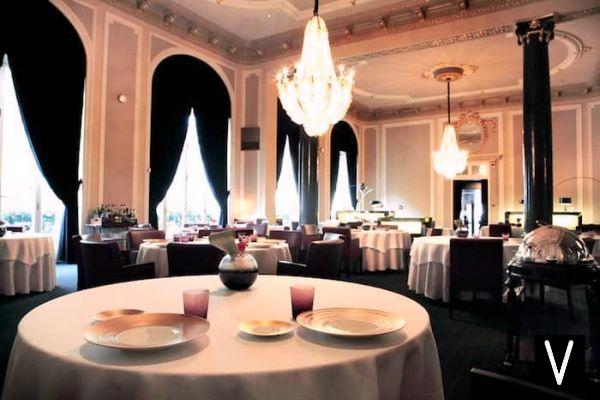 The chef of Caelis, Romain Fornellalthough not yet 40 years old, he has a first-rate curriculum: trained in the kitchens of Alain Ducasse, in 2000 he was the youngest French chef to achieve a Michelin star, at just 24 years old.

French with clear Catalan origins, Fornell leads since 2005 on Ristorante heavens, inside the El Palace hotel, the ancient Ritz of Barcelona, ​​one of the best in the city.

In a very elegant setting, Fornell offers solid cuisine with a clear French matrix, without losing sight of its Catalan origins.

Very interestingoffer for lunch: from Wednesday to Saturday, from 13pm to 30pm, a tasting menu is offered for only € 15, with two starters and two main courses, as well as dessert, wine and coffee.

The other two menus of tasting, the Escoffier Classic and the Festival, cost € 87 and € 132 respectively, excluding wines.

Restaurant with a great scenic impact and very regular performance over time, Caelis is everything you can expect from a starred restaurant Michelin . To read the reviews you can click here, if you want to reserve a table you can do it on the official page of the restaurant.

THEEl Palace hotel is one of the most renowned and luxurious in the city, discover the offers available to live an unforgettable experience in Barcelona on this page.

Caelis is the restaurant of the Palace hotel, located on Via Laietana 49, in the right Eixample. It can be reached easily from Plaça de Catalunya.

The restaurant is open from Wednesday to Saturday, from 13:30 to 15:30 and from 20:00 to 23:00. On Tuesdays the restaurant opens only for dinner. The days of chiusura are Sunday and Monday. 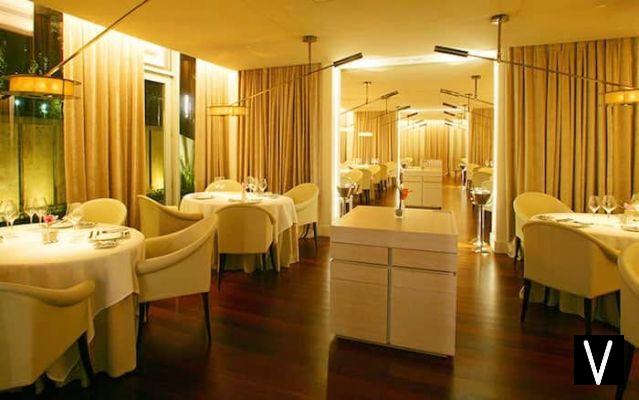 Jordi Cruz he was an authentic enfant prodige of Catalan cuisine: his first Michelin star was earned in 2002, at the early age of 24, the youngest in Spain; the second arrived 10 years later for his restaurant aBaC, thanks to his creative style of the highest level. The setting of aBaC is certainly one of the most spectacular in Barcelona: at the foot of Tibidabo, this restaurant-hotel is housed in a modernist villa, able to offer a luxury service worthy of its restaurant.

The aBaC is also famous for its hotel, one of the most prestigious in the city, and it is also possible to book all-round gourmet experiences, here you can find more information on current offers.

aBaC is located in Avinguda del Tibidabo, 1, not far from CosmoCaixa, and obviously close to the Tibidabo park. The restaurant is open every day for both lunch and dinner.

Barcelona's culinary offer certainly does not end there: we have reviewed the best historic restaurants - for a top-level gourmet experience you can think about Senyor Parellada, listed in the Michelin guide as a gourmand choice - and if after a dinner in a restaurant starry you want to put your wallet on a diet then don't miss our article on where to eat fish in Barcelona for less than 25 euros.