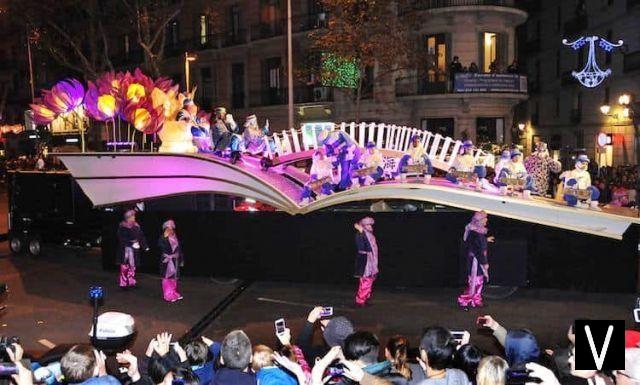 Barcelona, one of the most cheerful cities in Spain, welcomes tourists and residents to celebrate the beginning of the new year by providing events of all kinds. Fascinating during the Christmas period, fun during the New Year's Eve but equally interesting during the month of January - precisely because of the importance of King Magi and the celebrations during the days of 5 and 6 January: parades, fairs and themed exhibitions that always involve adults and children!

Let's find out together where to go, what to see and what to expect from the climate.

Barcelona in January: how to dress and climate

The climate of Barcelona in January it is usually very dry, with possible precipitation expected for the first half of the month (in December an average of 39mm was recorded for five consecutive days). The maximum temperatures do not exceed 15 ° C while during the night it can be reached but at 5 ° C: comfortable for a holiday in this period, it is advisable to pack various clothing so as to be able to face any variability at best.

Opt for a down jacket with hood, heavy sweaters and light sweaters - without forgetting gloves and thick socks especially for the evening.

January in Barcelona: what to see

Il on December 31st all people go to the Placa d'Espanya, a real stage that - at the stroke of midnight - gives life to one fireworks display grand accompanied by the water games - music and light of the Fuente Magica.

For those who want to savorChristmas atmosphere, until 7 January it is possible to admire the beautiful 5 meter long Nativity scene - which every year offers a different theme. Not only that, because the suggestive Christmas light show will still be present until January 6 - Christmas lights - in all the streets of Barcelona.


There is no shortage of Christmas markets until January 6 - Gran Via de Les Corts Catalanes - open from 11 am until 22 pm, which see more than 100 stalls offering local handicrafts, churros and hot chocolate for everyone.

Il ! - since 1996 - the bravest go to San Sebastian beach to take the inaugural bath of the new year in the sea, regardless of its not exactly hot temperature (around 18 ° C). The Primer Bany de l'Any event is organized by the Club Nataciò Atlètic Barcelona open all year thanks to its renowned fitness center and its swimming pools. Participants can then take a hot shower, drink hot drinks and savor traditional dishes to the sound of music and entertainment.

Il January 5 all through the streets of Barcelona to attend the Parade of the Magi, where each child can deliver the letter of wishes to Melchior, Balthazar and Gaspar. I tre Re of the day they will parade along the main streets on fairytale floats accompanied by shows, excellent music, dancers and lots of sweets to throw to the little ones.

Until January 6th it is also possible to participate in the Fiera de Reyes, on the Gran Via de les Corts Catalanes. What are you doing here? It is an important Spanish tradition linked to the Magi with the possibility of choosing the gift and receiving it during the Fair that has been active since 1877. For the Spaniards, the Three Kings are much more important and characteristic than Santa Claus, so much so that every 5th January all children leave their shoes near the window with different foodstuffs for the Three Kings and their camels - waiting for the gifts before going to bed. .


From '11 20 to January we celebrate the Sant'Atoni Festival with traditional Catalan celebrations called Correfoc, the Diables de Sant'Antoni, Gifanti, La Porca: they are all popular events linked to ancient traditions, handed down from generation to generation enriched every year by photography contests, poems, craft fairs, beer festivals and shows for children.

There is no travel without shopping, for this reason since January 7 Barcelona dresses up in winter sales for shopping in stores, boutiques and shopping centers: here the discounts are really advantageous and there are many people who take advantage of the period to make all kinds of purchases, after Christmas.

On January 4th we enter a special atmosphere, at Placa del Rei in beautiful gothic quarter, where from 19.30 pm the oldest symphonic choir in Barcelona with its 80 singers gives life to the free concert of Christmas carols.

Still on the subject of music, the 30th edition of the concerts of the best international bands, which meet in Barcelona, ​​is not to be missed from the 31 January to deliver high quality guitar themed music. Every kind of style - from rock to flamenco and indie - will battle to the rhythm of music to please every type of taste and preference.

Il ! the town of Sitges - Barcelona - has been gathering for 35 years to participate in the Half Marathon : over 5.000 participants running along the streets having fun and disposing of all the Christmas binges. You can participate - depending on your personal level - in the half marathon which includes 21.000 meters of running, for 2 hours and 30 minutes; the other type of marathon includes a course of about 10.000 meters and a duration of 1 hour and 15 minutes.

Audio Video January in Barcelona: what to do
Gothic Quarter Route ❯

add a comment of January in Barcelona: what to do