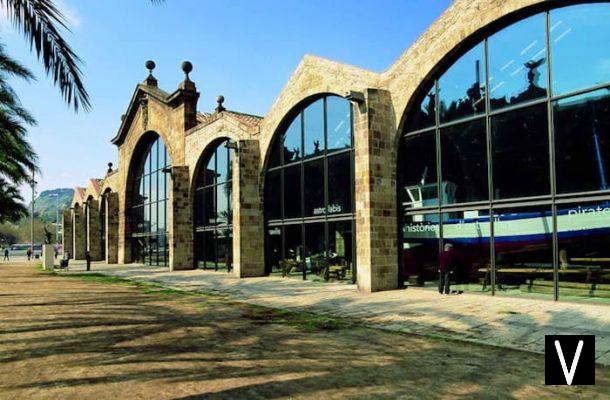 Il Maritime Museum of Barcelona (MMB) contains a large collection of objects and artifacts that allow us to understand the long relationship of the Catalan city with the sea. Housed within the huge complex of theRoyal Arsenal (in Catalan Drassanes Reals, in Spanish Atarazanas Reales) in the area of ​​the Old Port (in Catalan Port Vell), contains a large collection of objects and artifacts related to the sea, including some historic ships. Reopened after a long restoration of the Arsenale buildings in 2013, it is still undergoing reorganization, to allow for the final disposal of its permanent collection by the beginning of 2021.

History of the Royal Arsenal

The Royal Arsenal, i.e. the Drassanes, is one of the architectural complexes Gothic most important in Barcelona. Given its particular function, it represents a unique testimony of a manufacturing activity that is fundamental for the economy of the city: most of the warships of the Aragonese crown were built here, which extended its domains to Italy. Southern Italy, confronting on several occasions with the Italian maritime republics, especially with Genoa, with which it was in competition for the domination of the Western Mediterranean, as well as with the Ottoman Empire. Recently restored, the joint alone deserves a visit for its extraordinary historical and architectural importance.

The medieval origins and the Gothic era

The Maritime Museum of Barcelona is located in the Royal Arsenal, on the city's waterfront of the old port, at the foot of Montjuïc. As with that of Venice, the Barcelona arsenal was built for the production and maintenance of galleys and other warships in the service of the Aragon crown. The buildings were created from King Pedro III the Great at the end of the XNUMXth century, in order to have a space dedicated to the construction and maintenance of galleys at the exclusive service of the crown. The first complex consisted of a rectangular building, without roofing, surrounded by a protective wall and open to the sea, with four towers at the corners.

During the mid-fourteenth century, King Pedro IV the Ceremonious ordered the construction within the enclosure of a first building consisting of a series of columns and arches smaller in size than the current building. Towards the end of the century the same monarch decided to replace that first building with two larger structures, of which some pillars can be seen in the main facade, separated by a central patio.
In the middle of the XNUMXth century a new building was added to the joint: the New shop of the Diputació General, a deposit that could contain materials, tools and wood intended for the construction of the new galleys, and which is still preserved intact. The deposit represents a unique building of its kind, being one of the best preserved examples of Gothic architecture in all of Europe.

From the Renaissance period to today

The central body of the building was built starting from the second half of the XNUMXth century: its eight naves are located above the medieval building, as it has been possible to discover during the latest archaeological studies.

The last major architectural intervention consisted in the union of the two central naves to build the Grada Mayor, during the first decades of the eighteenth century, where you can now contemplate the reproduction of the Royal Galley of Don Giovanni of Austria.

The complex of buildings of the Royal Arsenal of Barcelona has been fortified over the centuries by various defensive works: of these the portal and the tower of Santa Madrona, which allowed the entrance to the city walls and integrated into the barracks of the same name, which has now disappeared.

Furthermore, the bastion of Santa Madrona has come down to the present day. All other military architectural elements were dismantled during the XNUMXth century to make room for the urban expansion of the Catalan city.

The arsenal was used continuously for the construction of military ships until 1745, when the production of warships was moved to the arsenal of Cartagena. Passed to the army, it was used as a barracks and cannon factory until 1935, when the property was sold to the Municipality of Barcelona. The following year, in 1936, it was converted into a maritime museum, a function it still performs today.

Due to the restoration work still in progress, a large part of the collection is awaiting its final arrangement, however the most interesting piece has already been brought back inside the building: the war galley of Don Giovanni of Austria. It is a faithful reproduction of the jail that brought the admiral of the Christian fleet back to Barcelona from the victory of Lepanto, in 1571, built in the same Arsenal, which ideally joins the Christian banner of the battle, kept inside the Cathedral of Santa Eulalia.

The museum also has a detached section of ships along the opposite pier: among these the most important is the Santa Eulalia, a 3-sails schooner from 1919, characteristic of coastal navigation in the Western Mediterranean until modern times, completely restored and fully functional.

Temporary exhibitions of the MMB

With an exhibition space of over Twentyfour sq.m., the Maritime Museum offers a large section dedicated to temporary exhibitions, ranging from art to archeology. Pending the definitive disposal of the museum fund, a part of its collection is exhibited with temporary exhibitions. Only the most important exhibitions are listed below.

How to get to the Maritime Museum

The entrance to the Maritime Museum is located in Avinguda dels Drassanes, in front of Plaça del Portal de la Pau, at the end of the Rambla. The museum can be reached by metro from the Drassanes stop (green line 3), or very easily on foot from both the Rambla and the Raval. With the Bus Turístic, you can get off at the Colom - Museu Maritim stop on the red line.

The price of the full ticket is 7€, and includes entrance to the museum, visit to temporary exhibitions and access to Santa Eulalia. The reduced admission instead is € 3,50: students under the age of 25 may be entitled to the reduction, provided they present their university card, and those over 65. Holders of the Barcelona Card are entitled to a 20% discount on the entrance ticket. Those wishing to visit only the Santa Eulalia, pay € 3 for the full ticket, and € 1 for the reduced one.

Access to the Museu Maritim is free for children under 17, and for everyone every Sunday after 15pm, as well as on some city holidays, such as La Mercè.

The National Museum of Art of Catalonia (MNAC)