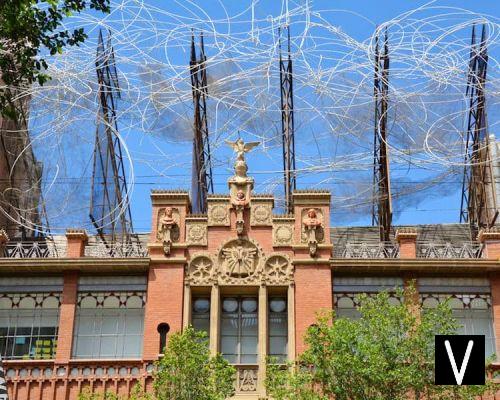 The Antoni Tàpies foundation is a museum located in the Eixample district of Barcelona. It is mainly dedicated to the life and work of Antoni Tàpies. Founded by the artist himself in 1984, the foundation is housed in one of the city's first modernist buildings.

Built between 1880 and 1882 by the architect Domènech i Montaner, the building is considered one of the first works of the architectural and urban renewal promoted by the modernist movement. The building stands out for its vaguely Mudejar-style facade and for its curious structure, characterized by wrought iron columns, more characteristic of markets and railway stations than of commercial offices of the late nineteenth century. The building was used for about a century, until 1981, as the headquarters of the Montaner i Simon publishing house, until it was sold to the Tàpies foundation, which undertook the restoration of the building.

The building was later crowned by a showy sculptural work by Antoni Tàpies himself: Cloud and chair (cloud and chair), certainly emblematic of the foundation that today bears his name. Today this institution houses a museum with a wide selection of the Catalan artist's work, in addition to which temporary exhibitions, scientific seminars, public lectures and cinema sessions are organized. Inside you can find a library specialized in modern and contemporary art, as well as the Tàpies archive, with the most complete collection of the artist's works and other documents.

The collection includes a selection of works by Antoni Tàpies, from the mid 40s to the 80s, with a special focus on lesser known works. In addition, the collection of works of art that Tàpies himself collected during his life, with works by modern and contemporary artists, such as Goya, Picasso, Klee e Kandiski, and an art collection from Asia and pre-Columbian America.

In addition to the permanent collection centered on Tàpies, the foundation organizes temporary exhibitions with a certain frequency throughout the year: its main field of action concerns contemporary art.

The Tàpies Foundation is located in Carrer d'Aragò 255, in a side street of Passeig de Gràcia, one block from casa Batlló and the Manzana de la discordia. The closest metro stop is Passeig de Gràcia (lines 3 and 4). With the Bus Turístic, you can get off at the Casa Batlló - Antoni Tàpies stop, along the blue and red lines.

The cost of the entrance ticket is € 7, reduced to € 5,60 for over 65s. Access is free for children under 16 and for holders of the Barcelona Card. The Ruta del Modernisme Card offers a 20% discount. The Tàpies foundation is also part of the Articket BCN circuit.