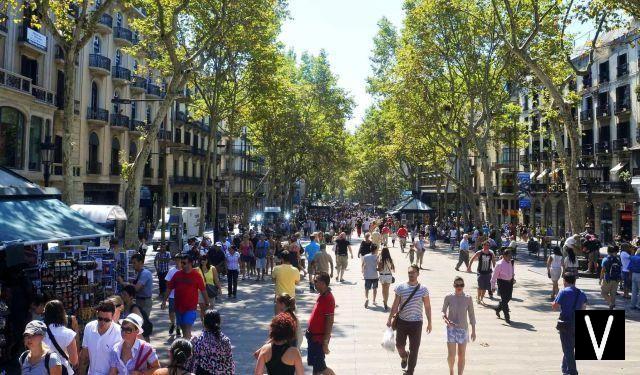 The Ramblas, or rather, Las Ramblas, is the symbol of the nightlife of Barcelona, one of the first images that come to mind when talking about the Catalan capital and, perhaps, it is today the most seen and known place in this Catalan town that seems to slide placidly towards the sea.

Several peculiarities of this long avenue, the microuniverses that gravitate around its segments, the food, colors, art and shows, but also curiosities, mysteries and that sort of magic that you can breathe here, especially at night.

The Ramblas between history and legend

Known as la Rambla, but the plural Ramblas would be more correct, it is the most famous avenue in all of Barcelona.

1,2 kilometers long, it divides the Barrio Gotico (Gothic Quarter) from El Raval, a neighborhood formerly populated by the working class of Barcelona.

The Ramblas extends from the elegant Plaça Catalunya, to the north, up to Port Vell, where is the statue of Christopher Columbus, beyond which, a few steps further, you reach the mirror of the sea along the terminals reserved for cruises.

History of the Ramblas

The history of this avenue remains full of shadows, a fairly plausible hypothesis is that the Ramblas were once a river which flowed in a territory dominated by the Romans for several generations and on which a city had been built between the course of two streams: one was the Torrent de l'Olla, which today would correspond to the Via Laietana, the other, to the southwest, known as Rambla.

Another hypothesis instead, claims that the Rambla was precisely the course of a now dry stream, and this thesis would also be supported by the etymology of the toponym.

There are, in fact, some documents of the X-XI century after Christ, which show the streams and streams that came downstream from the Collserola mountains called Arenys in Latin.

Following the conquest of Valencia by James I, the Arabic word “rambla-amb” which has the same meaning as the Christian word “areny”, was incorporated into the spoken language of the Catalans.

According to the linguist Joan Coromines, therefore, this would indicate the meaning of the name Rambla. The translation could therefore be “dry torrent”. Despite the various theories, however, still there is no univocal certainty on the history of this popular avenue.

La Rambla is not one, which is why this definition is not entirely correct.

Indeed, the famous boulevard is not a single segment from Plaça Catalunya in Port Vell, but it is made up of different avenues, different "segments"; Rambla de Canaletes; Rambla dels Estudis; Rambla de les Flores or Sant Josep; Rambla dels Caputxins or the Center; Rambla de Santa Monica and Rambla de Mar.

La Rambla de Canalete it is practically the principle of las Ramblas, the initial section that owes its name to the Canaletes fountain, even if we do not currently see the original one, but a more current one which replaced the previous one in the XNUMXth-XNUMXth century.

The second section that makes up the majestic avenue is the Rambla dels Estudis. The name derives from the building of the University which was razed to the ground by Felipe V in 1843. Walking along this stretch you can hear the constant chirping that comes from the bird market in calle Portaferrissa.

La Rambla de les Flors, so called because the flower market was held there in the nineteenth century, it is now known for the same reason, namely the myriad of colors and scents that come from flower stalls, alternating with stalls of books and newspapers.

The famous one overlooks this Rambla Mercato de la Boqueria.

La Rambla dels Caputxin takes its name from the Capuchin convent. In this segment lies the wonderful mosaic of Mirò and it is in this section that yes concentrates the nightlife.

The majestic Gran Teatre del Liceu and the Plaça Reial with the iron fountain of the Three Graces overlook this Rambla.

La Rambla de Santa Monica it is the last stretch (actually the penultimate) of las Ramblas and which leads to the entrance to the port area.

Here there are some very old buildings rich in history, such as the Marc Palace in Reus, as well as some religious buildings, such as the Church of the Mare de Nuestra Señora de la Mercede.

La Rambla de Mar, although it is not really part of the long avenue, it still takes the name of Rambla and in fact marks its final stretch to the sea. The walk here continues on a suggestive wooden walkway that leads to the shopping and entertainment area Maremagnum, characterized by several discos, pubs, a cinema and various shops.

Walking on the Ramblas is one of the favorite activities for tourists that during the whole year they find themselves, both day and evening, on this extraordinary multicolored corridor full of surprises.

Likewise, as in all large and populous cities, we must pay attention to pickpockets who, not infrequently, score a few hits at the expense of tourists.

The whole Rambla is well served by By public transport, there are several metro stops, but also taxis and buses. The area adjacent to and along the Rambla is part of the pedestrian area in the center.

What to see on the Ramblas

There are so many things to see in Barcelona, ​​although it is a city that can easily be visited even in a weekend, at least on a general level.

But for those who linger a little longer, the things to discover in the Ramblas alone are many and it is well worth seeing them all.

Starting right from the first stretch, then starting from Plaça de Catalunya, the Rambla de Canaletes, you can stop and admire one of the best known and most famous monuments in the whole Catalan city: the Font de canaletes. The original fountain dates back to the XNUMXth century and was characterized by two channels that made the water slide with impetus into a basin.

Today you can see one iron fountain which dates back to the XNUMXth century and which rose to the headlines more for the fact that the fans of the FC Barcelona football team celebrate the successes of their team there and for the architectural beauty of the structure which, to tell the truth, is a bit anonymous in the midst of the jubilation of the crowd that flows like a river on the Rambla.

In which point of the Ramblas yes they find several music and musical instrument shops, but it is also the point where street artists perform in pleasant acoustic concerts while people flock to listen to the notes that mingle with a very suggestive atmosphere reminiscent of elegant dancing or opera evenings.

Going down towards the port, you cross the Rambla dels Estudis.

Here, near the calle Portaferrissa, is the kaleidoscopic bird market, a traditional market that has been taking place in this segment of the Ramblas for years and is characterized by a multitude of cages and the noisy chirping of colorful birds.

But there are not only birds, there are often other small pets, from guinea pigs (cavia porcellus) to dwarf rabbits, to small hamsters, iguanas, squirrels and goldfish.

In fact, another name by which this Rambla is known is Rambla dels Ocells, also due to the fact that this stretch is often frequented by sparrows.

But this is not the only thing to see in the Rambla dels Estudi. Don't miss a visit to the CCCB, Center for Contemporary Culture of Barcelona.

More than a museum, it is a real one urban culture center. In fact, this is a space entirely dedicated not only to exhibition, but also to research, cultural debate, experimentation that have as their object contemporary culture and art, whether visual, philosophical, literary, cinematographic, musical arts and so on. Street.

In short, a forge of talent and creative research.

Most of the projects carried out and supported are self-produced, such as the thematic exhibitions or most of the live events.

So what can you see in this evolving and interactive museum? All the year there are different exhibitions for the various thematic areas, such as Culture, Design, Science etc.. But there are also activities, which differ periodically. The CCCB is open every day except Mondays. 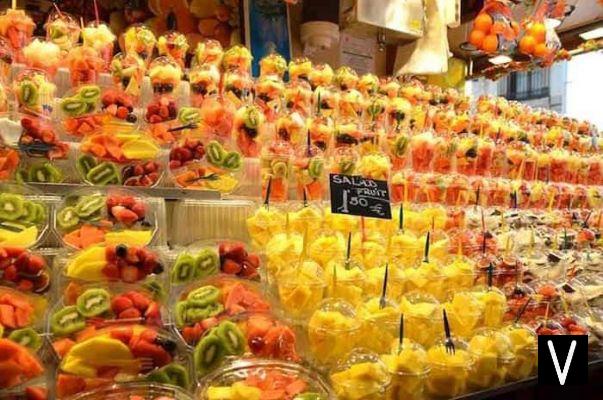 Another great attraction overlooking the Ramblas, in addition to the colorful flower market, is the very famous Bouqueria Market.

From the outside, the market is not spectacular, but as soon as you cross the threshold you can witness a truly impressive sight: a triumph of colors and scents that come from the opulent stalls of fruit of all kinds.

Colorful smoothies, baskets with pieces of cut fruit at very affordable prices, but not only, also lots of vegetables, even the most exotic ones and, last but not least, fresh fish.

But not only that, here it can be found the excellent Serrano ham, the Spanish cured ham known all over the world.

Complete guide on BoqueriaFind out now

On the Rambla de Caputxins is the Plaça Reial, or rather just behind the Ramblas, in the Gothic Quarter.

In addition to being very cool in summer, shaded by huge palm trees, it is an elegant meeting point for an aperitif or for breakfast.

Intimate and suggestive, it has the attraction Fountain of the Three Graces, designed by Antoni Rovira i Trias and with two lanterns designed by a young Gaudí.

Almost in front of the homonymous metro stop, the elegant theater rises in all its majesty Gran Teatre del Liceu, still today a true institution as regards the art and culture of the city of which it is, not without merit, one of the symbols.

Today it is a publicly owned theater and is managed by the Gran Teatre del Liceu Foundation.

Next to the Liceu stop, and in any case especially in the Ramblas de les Flors, it is possible every evening, but also during the day, to see different street artists performing, from living statues to impromptu break dance dances.

For the little ones, the Museo de Cera, in a neoclassical building.

The Ramblas is the most central area of ​​Barcelona and offers a lot of services and places to eat, so staying in this area is very convenient. In addition there is also the aerobus service that connects the area to Barcelona El Prat airport.

Where to sleep on the Ramblas Find out all the tips

How to get to the Ramblas

The Ramblas are predominantly one pedestrian zone where car traffic is therefore limited to public transport and taxis, but the connections are really efficient.

There are two metro stops, one at the beginning of the large avenue, near the Christopher Columbus monument, the Drassanes stop, L3, green line, and then in the Ramblas des Flores there is the High school stop, always green line.

At the end of the Ramblas you will find the stop Catalonia. Here the red, L1 and green subways cross.

Audio Video The Ramblas, Barcelona
The King of Magic ❯