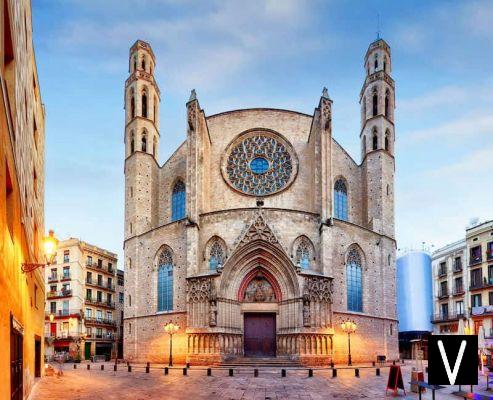 The basilica of Santa María del Mar is one of the best examples of Catalan Gothic that can be admired in Barcelona. Located in the La Ribera district, Santa Maria del Mar has a long history linked to the city and its inhabitants.

There is often confusion between this Church and the Barcelona Cathedral. The Cathedral is located in the Barrio Gotico and is called Cathedral of the Holy Cross and Santa Eulalia (La Seu).

Shortly after the arrival of Christianity in the ancient Roman colony of Barcino, today's Barcelona, ​​a small Christian community was born, near the sea and outside the city walls.

There are traces of an ancient Christian necropolis, the place where Santa Eulalia was traditionally buried in the year 303.

This may be the site of a first chapel, initially known as Santa Maria de les Arenes, which slowly expanded over the centuries. There is documentary evidence that, at the end of the XNUMXth century, the existence of a temple called Santa María del Mar.

During the thirteenth century the city experienced intense growth, especially in the current district of La Ribera, known during the time as Vilanova del Mar. It was an area with intense mercantile activity, with warehouses, import and export activities of all sorts of goods, shops of every art and craft of the time, of which there is still a trace in the names of the streets.

During this period the palaces were built along the Carrer Montcada where the rich merchant class and the city nobility lived. This material progress found its reflection in the desire to build a larger church than the pre-existing one. The merchant class offered their economic support, the ecclesiastical authorities supported the initiative, and King Pere III gave his permission to extract the stone necessary for the construction of the basilica.


However, to build the church materially were the dockers of the port, the so-called Bastaixos, the fishermen and the various craftsmen of the shops, who offered their arms, and their boats, to transport the stone from the Montjuïc quarry, indissolubly binding the humblest classes. to the history of Santa María del Mar. This humble origin contrasts with that of the Cathedral of Barcelona, ​​which was instead financed mainly by the monarchy, the nobility and the large city guilds.

The first stone of the present basilica was laid on March 25, 1329, as can be read on the tombstones on the sides of the door on Carrer de Santa María. The last keystone was placed on November 3, 1383. The temple was consecrated the following year, on 15 August 1384: the church was built in just 55 years, an extremely fast time, such as to guarantee a certain homogeneity in the construction method.

The authors of the project were the masters Berenguer de Montagut and Ramon Despuig. There is a novel, very sold in Spain, set during the time of the construction of the church: the cathedral of the sea, by Ildefonso Falconés.

The popular origin of the church is testified by the tradition, for all Barcelona sailors, to ask the Madonna for her protection, before every sea voyage.

The church had a rather troubled history: damaged by the earthquake of 1428, it suffered damage during the siege of 1714; the most serious damage occurred on 19 July 1936, when it was attacked by the republican anarchists at the beginning of the Spanish civil war, leading to the complete destruction of the high altar of the Baroque era, of the interior decorations and of the ecclesiastical archives, leaving only the walls intact , the columns and some of the tallest windows. The church was restored during the 1970s, highlighting the ancient Gothic structure.

It can be said without doubt that the architecture of Santa María del Mar is, among the churches of Barcelona, ​​the clearest example of Catalan Gothic: the speed in the construction of the church, erected in just 55 years, ensured a certain homogeneity of style, while the destruction suffered during the civil war eliminated all the baroque decorations inside, bringing it back to its original XNUMXth century conditions.

Unlike the Northern European style, the Catalan Gothic is characterized by a minor interior decoration, with a development of the spaces that tends more towards the horizontal lines than towards the top, and for the bell towers ending with terraces instead of spiers.

The building demonstrates a series of proportions typical of the Middle Ages: the width at the base, and the height of the central nave, are exactly 33 meters, thus being able to circumscribe the facade within a circumference. Seen from the outside, the church gives an idea of ​​austerity and compactness, but once inside this idea disappears and gives way to an image of lightness and airiness, thanks to the particular precautions adopted during the construction of the church.

At the exit of the temple, you can admire a Gothic fountain, from 1402, in the Plaça de Santa María, in front of the church. On one of its side facades instead there is the Fossar de los Moreres, a space dedicated to the Catalan fallen during the war of succession of 1714, who were buried here: a perpetual flame recalls the sacrifice. 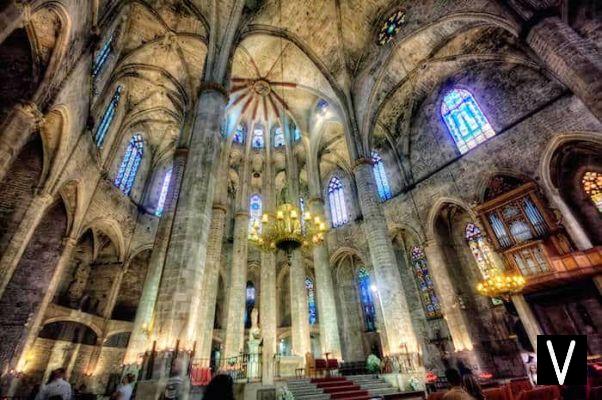 The interior is characterized by three naves, very similar to each other, which open directly into the apse.

A series of 16 columns of octagonal plan, 1,60 meters wide at the base, help to provide the church with an idea of ​​lightness and agility.

The pointed arches that support the vault of the central nave develop from the capitals of the columns: at the crossing point you can see the keystones, decorated with scenes and city symbols: they were restored to their original beauty during a long restoration, between 1971 and 1985.

The church is very bright inside, thanks to the numerous windows on the sides of the aisles, and above all to the huge windows arranged around the apse, able to flood the entire interior space with light. Below the apse there is a small crypt, which houses the remains of Sant Cugat, a Barcelona martyr from the year 303, a contemporary of Santa Eulalia.

The windows have been rebuilt several times: it is certain that the original windows were destroyed by the earthquake of 1428, as well as those of the central rose window, which was completely rebuilt in 1459. During the restoration of 1922, original fragments of the medieval windows were found, currently visible inside the church museum. Of the other windows, many were destroyed in the arson of 1936, and rebuilt between the 50s and 60s. This explains the presence, in one of the side windows on the left, of the emblem of the Barcelona football team.

The Church of Santa Maria del Mar is the protagonist of Ildefonso Falcones' book "The Cathedral of the Sea", a book with a historical setting that speaks of the Catalan society of the fourteenth century.

Santa María del Mar is located in the Ciutat Vella, in the La Ribera district. The closest metro stops are Jaume I and Barceloneta (both reachable by line 1)

The entrance to the basilica requires the purchase of an entrance ticket, only if you enter between 13:00 and 17:00, and costs € 7, including access to the crypt and the terraces of the church. Barcelona Card holders are entitled to a € 1 discount. Church guides offer tours in English or Spanish, but not in Italian.