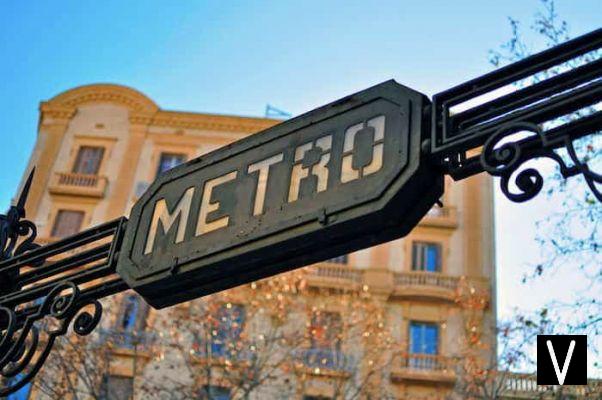 Barcelona Metro is the main urban transport service in Barcelona and surrounding municipalities, such as Badalona and Hospitalet de Llobregat.

With its 180 stations, and over 1 million users per day, it is the second largest network in Spain and one of the largest in Europe.

La Barcelona metro It includes 11 lines, of which 8 managed by TMB (Transports Metropolitans de Barcelona) and 3 by FGC (Ferrocarrils de la Generalitat de Catalunya): the system is perfectly integrated and allows you to use a single ticket regardless of the operator. Download the official map now. 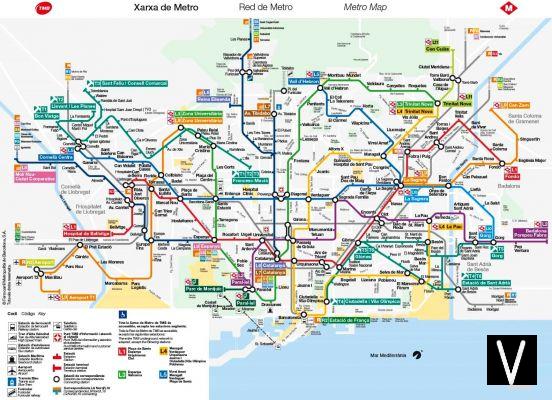 The Barcelona metro starts its service at 5:00 am and ends at midnight Monday to Thursday.

On Fridays, and the days before holidays, the metro remains open until 2:00 in the morning.

On Saturdays, however, the subway remains open all night, with uninterrupted service until Sunday at 24:00. On some special days the metro operates a continuous service: June 23 (San Giovanni), August 14 (Feria de Gràcia), September 23 (Festa de la Mercè), and December 31, for New Year's Eve.

The Barcelona metro offers a wide range of tickets and season tickets, to meet the most diverse needs: single ticket, T-Dia, T-10, BCN Hola! Card, and Barcelona Card are all season tickets with different prices and services offered.


The Billet airport is a special ticket that is used to connect with the T1 and T2 stations of El Prat airport. It costs € 4.50.

Il T-Dia is a day ticket, valid for one day, which can be used within the chosen fare zone. This is a personal ticket, and can only be used by one person. The cost of a T-Dia within zone 1 is € 8,40.

The T-10 is a ticket valid for 10 journeys, costing € 9,95 in zone 1. It is not a personal ticket, so it can be used by several people at the same time, as long as they continue to travel together. The T-10 can only be used within the chosen area.

The BCN Hello! Card (purchased online is discounted) is a pass issued by TMB, available for 2, 3, 4 or 5 days, designed specifically for tourists: it allows you to use the entire network of urban transport in Barcelona without limitation, including connections to El Prat airport , and the Montjuïc funicular.

The Barcelona Card is a 3, 4 or 5 day service card, which includes, among other things, the use of public transport in Barcelona. Includes connection service to and from El Prat airport. There is also a 1 and 2 day version, the Barcelona Card Express.

To find out which subscription is the most convenient, read this article.

Tickets and passes can be purchased at any vending machine, present at the entrance of each station, as well as at the various ticket offices. Children under the age of 4 can use the transport services free of charge.

Barcelona's transport system is divided into 6 fare zones, with zone 1 being the innermost one.

The whole city of Barcelona falls within zone 1, so you will hardly need to leave this area. Those who need to go to the municipalities around Barcelona can look at the area of ​​their destination on this map.

TMB has an official app that allows you to access all information on transport by metro and bus, with real-time data on waiting times and any malfunctions.

Plaça de Catalunya is the nerve center of Barcelona's urban transport, with 4 metro lines meeting at the same stop (1, 3, 6 and 7).

From here you can easily reach both La Rambla and Eixample, or continue on to other destinations.

Plaça de Catalunya is also an important urban bus stop: a night network, the NitBus, has its terminus synchronized at this station during the night, thus being able to take advantage of connections and move from one part of the city to another.

Also the night bus to the airport, the N46, which allows you to go and arrive in El Prat between 2:00 and 5:00 in the morning. Plaça de Catalunya is also the arrival destination of the aerobus, but not of cargo: for that it is necessary to go to Urgell or Plaça de Espanya.

Furthermore, in Plaça de Espanya there are left luggage facilities with the option of collecting it directly at the airport.

Sants is there Barcelona main train station, from which long-distance trains depart and arrive to Madrid.

Consequently, it is an important interchange: metro lines 3 and 5 have a stop, as does the Renfe cercanías network, with direct connections to El Prat airport, and the urban bus lines H10 and 54. At the station of Sants you can store your luggage for up to 24 hours.

The Arc de Triomf station, in addition to having the monument that gives it its name nearby, offers an intermodal hub with the North Station, the main bus station in Barcelona, ​​where buses arrive from Girona airport.

From here you can take buses both to other destinations in Catalonia, such as Lloret del Mar, the Costa Brava and Girona, to Andorra and the rest of Spain: Zaragoza, Madrid, Valencia and Seville.

Sagrera railway station is expected to become the arrival point for AVE trains heading for France, and major works are underway in the area.

Metro lines 1, 5 and 9 have a stop at the train station, with which they share the Renfe regional train station, and train connections throughout the Costa Brava.

10 places to enter for free with the Barcelona Card

Barcelona Card: what it is, how much it costs and when it is convenient

99%
We have been able to provide in 99% of times, the solutions that users were looking for when consulting our page.