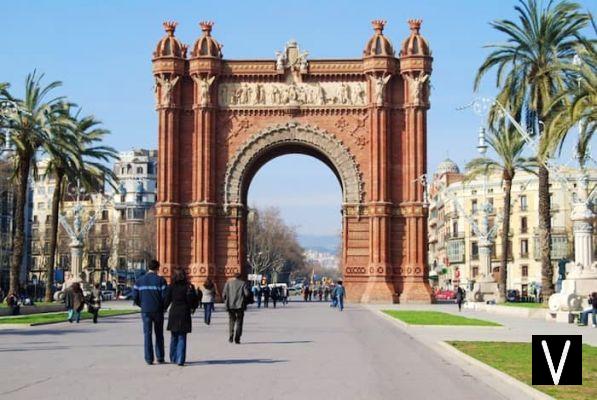 What is the Arc de Triomphe

The Arc de Triomphe (in Catalan arc de Triomf) is a monumental arch about 30 meters high, designed by the architect Josep Vilaseca as the main entrance to the universal exhibition of 1888, and built together with the passeig of Lluís Companys, the long pedestrian path leading to the parc the Ciutadella.

Unlike other similar works, such as the arches of Rome or Paris, the arc de Triomf was not built to celebrate a military victory, but rather to pay homage to the economic, artistic and scientific progress of humanity.

The Arc de Triomphe is a typical crossing point during the Barcelona marathon and half marathon, and for some years it has been used as a destination.

The area around the arch is also used for concerts and events, among which the largest is the diada, where a giant Estelada flag hangs in the middle of the arch, and the whole area is home to numerous events and celebrations.

The style of the arch is a clear reference to architecture mudejar, characteristic of the Arab domination of Spain, with extensive use of bricks and majolica. The upper part is richly decorated with friezes and sculptures, the result of the work of some of the greatest Catalan artists of the time: Josep Reynés, Josep Limona, Antoni Vilanova, Torquat Tasso, Manuel Fuxà and Pere Carbonell; the sculptures and friezes are not in marble, as one might think, but in artificial Portland cement stone.

I friezes represent allegories related to the universal exhibition: on the front and on the back the city of Barcelona is represented in the act of receiving the nations (on the side of the Ronda de Sant Pere) and dispensing rewards to them (on the side of the passeig de Lluís Companys ); on the two sides, on the other hand, agriculture, industry, commerce (right side), and sciences and arts (left side) are represented.


At the corners, on the other hand, twelve winged figures are arranged to represent the allegory of fame, in two distinct postures: half are playing trumpets and the other half has laurel branches.

Where is the Arc de Triomphe and how to reach it

THEarch of Triumph it is located north of the Parc de la Ciutadella, at the confluence of the passeig de Lluís Companys, the ronda de Sant Pere and the passeig de Sant Joan.

The monument can be reached in different ways: through the homonymous station of the metro, located on line 1 (red), or on foot: it is about 1 km from the Gothic quarter, as well as from Plaça de Catalunya.

With the tourist bus you can take the red line and get off at the Parc de la Ciutadella-Zoo stop, and from there cross the park (about a quarter of an hour), or stop at the Plaça de Catalunya stop (red and blue lines), and continue walk along the Ronda de Sant Pere.

Gaudí's secret: the Tower of Bellesguard