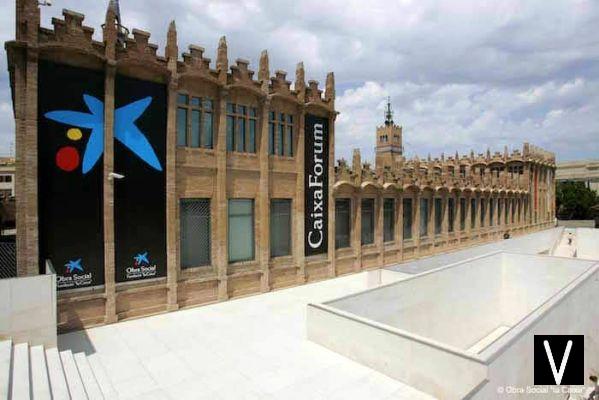 The CaixaForum is a 'former modernist textile factory, converted into a cultural space. Numerous temporary exhibitions are held within its rooms, and thanks to its privileged location near Plaça de Espanya, the CaixaForum is ideal for a visit dedicated to the Montjuïc area.

History of the CaixaForum

It was the industrialist Casimir Casaramona to want to set up a textile factory at the foot of Montjuïc, and in 1910 commissioned the architect Josep Puig i Cadafalch, one of the most representative exponents of Catalan modernism, to design and build a newly designed factory. The result, inaugurated in 1913, was a typical ensemble of modernist industrial architecture, in which the typical Catalan vaults can be recognized, combined with ceramic and artificial stone decorations.

Puig i Cadafalch endowed the joint with a characteristic neo-gothic aspect, with very accurate details, such as pinnacles and square towers.

The factory, the largest building built by the Catalan architect, fell into disuse over the years, and in 1940 was transformed into a national police barracks. In 2002 the building was acquired by the La Caixa banking group, to make it a cultural center, starting the renovation works that converted the old factory into the current CaixaForum. Inside there is a space dedicated to Catalan modernism.

Temporary exhibitions of the CaixaForum for 2021

The CaixaForum hosts a large number of temporary exhibitions throughout the year:

The CaixaForum is located in Avinguda Francesc Ferrer i Guàrdia, about 400 meters from Plaça de Espanya (metro lines 1 and 3). Arrived on the Plaça, head towards the MNAC, in Avinguda de María Cristina, arrived at the foot of the staircase leading to the Font Mágica take the street on the right after a few meters you can already see the CaixaForum. With the Bus Turístic you can get off directly at the CaixaForum stop on the red line.

The CaixaForum is open every day, from 10:00 to 20:00. In July and August, every Wednesday, the opening is extended until 23pm.

Audio Video The CaixaForum
The best burgers in Barcelona ❯

Neighbourhoods and districts of Barcelona

97%
We have been able to provide in 97% of times, the solutions that users were looking for when consulting our page.