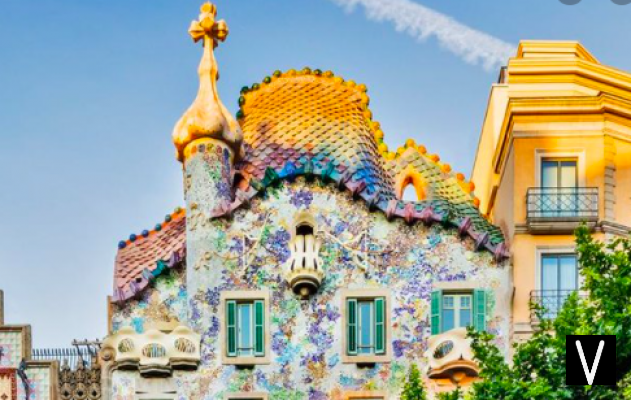 The Casa Batlló is a building in the center of Barcelona, ​​completely restored by Antoni Gaudí between 1904 and 1907. It is considered one of the fundamental works of the Catalan architect, the greatest exponent of Catalan modernism.

The history of the building

Located at number 43 on Barcelona's Passeig de Gràcia, casa Batlló is the result of a complete renovation of a building previously built in 1877.

The original project of 1877, signed by the architect Emili Sala i Cortés, did not have any particular characteristics, being able to be defined as a classic style typical of the period. The building had a basement, a ground floor used for commercial premises, four floors for residential use and a garden in the back.

In 1900, the entire building was bought by Josep Batlló, an important textile industrialist of the time, to make it the residence of his family.

Josep wanted an architect who could design a house completely different from what had been built up to that point, and which would stand out as a bold and creative work.

He therefore chose to rely on Gaudí, who already had a certain reputation in the city as he had built Parc Güell, and explicitly asked him to present him with an ambitious project. Gaudí did not spare himself, and I created an absolutely innovative project for the Batllós.

The industrialist's initial intention was to tear down the house to completely rebuild it, but Gaudí convinced him that a renovation would suffice. The project, presented to the City of Barcelona in 1904, required three years of work to be completed.

The house was inhabited by the Batlló family until 1954, when it was bought by an insurance company. Subjected to other renovations, it was sold in 1993 to its current owners, a private company that allowed it to be rented to host events, before turning it into a museum in 2005.

The style of Gaudí

Like all the works designed by the Catalan architect, the final result is so eclectic that it can be defined as Modernist or Art Nouveau only in a broader sense.

It can be said that the House is fully part of Gaudí's “naturalist” period, with clear references to the marine world in every detail of the house, making the whole building like the realization of a dream.

However, the solutions adopted are not only of great artistic impact: the house is designed giving great importance to functionality and liveability, with great care for the creation of an environment that was adequately lit and ventilated.

The exterior of the Batlló house

The facade is decorated with a characteristic colored mosaic of ceramic and brightly colored glass (trencadís), which create different optical effects depending on the direction of the light that illuminates them. The roof is arched and covered with iridescent ceramics, recalling in its shape the back of a dragon.

The balconies were cleverly rebuilt in stone and wrought iron, recalling a “bone” motif. These balconies, when illuminated in a certain way during the evening, change their appearance, becoming parts of a skull, giant bats, or whatever the observer can imagine.

The interior of the Casa Batlló

The interiors of the house were designed by Gaudí with the same care shown for the exteriors, and making extensive use of different materials to achieve the desired result: stone, iron, wood and ceramics were used in the most diverse ways, with the work of skilled craftsmen. , to create a result that, in addition to creating amazement for visitors, was extremely functional for the inhabitants of the house.

As in many other projects by Gaudí (first of all that of La Pedrera), the interiors of the house are designed in such a way as to make the most of curved surfaces, limiting the use of internal corners.

The ground floor was designed to allow commercial activities (among the various tenants to mention the company of the Lumiére brothers, who had invented the cinema) while the upper floors were used as houses: among these the first floor, intended for the Batlló family, stands out. Over 700 square meters large, it is the main floor of the building.

The first floor, the current seat of the museum, has an independent access from the street: every detail recalls elements of nature, such as the turtle-shaped skylights and the handrails that recalled the backbone of a sea monster.

The entrance to the house consists of a large hall, used at the time for parties and social events, characterized by large windows that could allow adequate lighting and that made the room a showcase on the street below.

Gaudí, to allow the use of spaces in a different way, designed oak doors that divided the hall into three parts when closed, but which could open in such a way as to create a unique environment if necessary.

The interior of the house was further illuminated by the presence of an internal patio (patio de luces), typical of Spanish architecture. Gaudí had the patio walls covered with white and blue ceramics, arranged in such a way as to reflect more light into the interior.

The attic is one of the most ingenious spaces in the house: used as common rooms in the condominium and other service rooms, it was built by repeating, for its entire length, about 60 catenary arches with great visual impact, also representing an absolutely engineering solution. innovative. The catenary arch is currently used for the construction of bridges and structures, being among the various types of arch the one that best discharges structural tensions.

Where is Casa Batlló and how to reach it

Tickets are discounted by € 3 Buy the Barcelona Card

The normal ticket costs 23,5 euros. There is a discount of 3 euros for those under the age of 18, university students (with a university card), or over 65. Children under the age of 7 enter for free. Other discounts are available with the following tourist cards: Bus Turístic, Barcelona City Tours, Barcelona Card, Barcelona Pass, Minicards Minicards, Ruta del Modernisme and Barcelona Walking Tours.